After a long month and a half of intense playoff action, the NBA Finals are finally upon us. Beginning today, the Eastern Conference champion Cleveland Cavaliers will square off against the San Antonio Spurs, victors in the West, in a matchup billed as LeBron James versus Tim Duncan. Can King James lead Cleveland to the Promised Land, or are the Big Fundamental and crew just too sound to lose? We take a look at the factors at play with the Larry O'Brien Trophy at stake. 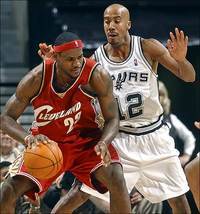 Can the Spurs handle LeBron?
This postseason, LeBron James has emerged as a bona fide superstar, leading his hometown franchise to their first Finals in team history. But the issue still remains: does "The Chosen One" have enough to carry the Cavs all the way? Despite his superhuman performances, James has pulled a Houdini during other stretches, leaving a barren box score and scratched heads. Inconsistencies with his jumper and free-throw shooting woes have been exposed as well. San Antonio small forward Bruce Bowen, "dirty player" or not, is one heck of a defender, and will undoubtedly frustrate James to no end, so the larger issue may be how King James' court will help him out. It will be up to the role players to step down as the Spurs clamp down on LeBron. Rookie guard Daniel Gibson came up big in the Eastern Conference finals versus the Detroit Pistons, and center Zydrunas Ilgauskas has pieced together a solid postseason. It has been the LBJ show all the time in the home of the Rock and Roll Hall of Fame, but the contributions from "Tito and Jermaine," as new analyst Reggie Miller so eloquently put it, will determine the series.

Why the Spurs will win

Experience
The Spurs are no strangers to the Finals and have emerged victorious before, winning it all in 2003 and 2005 with essentially the same core of players. Tim Duncan has again brought MVP-caliber play in the postseason, while Tony Parker and Manu Ginobili, the other members of the San Antonio All-Star triumvirate, have stepped up as well. Coach Gregg Popovich is one of the best in the business at guiding deep playoff runs, and his impressive 88-51 postseason record as well as his ten straight playoff appearances speaks for themselves. Time and again, the Spurs have proven in the postseason why they have flirted with the dynasty moniker. On the other side of the hardwood, the Cavs are making their first Finals appearance in franchise history. Cleveland coach Mike Brown, a Popovich protégé, pales in comparison to Pop and his three rings, and his Cavaliers looked star struck in their first two contests against the Pistons. The lights only get brighter in June. Can they handle the heat? We know the Spurs can.

Depth
With a player the caliber of Manu Ginobili coming off the bench, you know the Spurs are a deep squad. Second-year Spur Michael Finley has thrived in his new complementary role after years as a super scorer, but can still turn it on in the clutch. Unlike the Cavs, San Antonio has more than one player with the ability to consistently put up 20+ points per game when called upon. With gunners like Brent Barry and Robert "Big Shot Bob" Horry and solid role players like Francisco Elson and Jacque Vaughn on the bench to accompany their stars, the Spurs pack a hydra-esque punch on both ends of the court. The Spurs have four past or present Western Conference All-Stars, while the Cavs can only muster two from the vastly inferior East. Let's face it, the Spurs can go 10-deep, while every player on Cleveland's roster not named LeBron can essentially be considered an afterthought.

Why the Cavs will win

Momentum
Emotions are high for Cleveland after climbing out of a 0-2 hole to take four straight from the top-seeded Detroit Pistons and capture their first Eastern Conference title in team history. Led by LeBron with some key contributions from his sidekicks, the Cavs, coming in with a four game win streak, have begun accumulating an aura of invincibility, justified or not. The Spurs on the other hand are coming off of a weeklong-plus break after downing the Utah Jazz in the conference finals in five games. Will rust play in? We'll find out. Burnout may be a factor as well, as the Cavs steamrolled the Wizards, Nets and Pistons en route to the finals, while the Spurs had to fight their way through Denver, Phoenix and Utah, all of whom could have easily emerged from the treacherous West and given the Cavs a legitimate run.

The star factor
As evidenced by his 48-point effort in game five against the Pistons, King James is the most explosive player on the court. While not as consistent as Duncan, LeBron has the talent to carry Cleveland on his back and dominate a game, and has elevated his postseason play in his fourth year. You can cite Gibson's breakout performance or Ilgauska's contributions, but when it is all said and done, it comes down to star power. Some questioned His Highness after lackluster performances in games one and two against the Pistons, but his recent play has silenced the critics as King James begins securing his spot in the echelon of all-time legendary players. Heir apparent or not, LeBron is flat-out good. If LBJ brings his A-game for 48 minutes, then Cleveland's chances look bright. 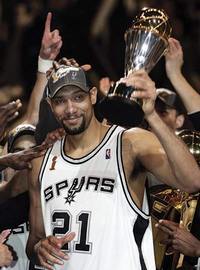 Photo: Forward-center Tim Duncan of the San Antonio Spurs looks to lead his team to this scene for the fourth time in eight years. Photo courtesy of Getty Images.

Photo: Forward-center Tim Duncan of the San Antonio Spurs looks to lead his team to this scene for the fourth time in eight years. Photo courtesy of Getty Images.

Cleveland shooting guard
Daniel Gibson emerged as a legitimate scoring option in the conference finals against Detroit, the obvious benefactor of the open looks that resulted from double teams on James. Gibson, all but overlooked this season despite an impressive collegiate career at the University of Texas, has proven his ability to hit the open jumper and make his free throws. And as if the former second rounder needed any more motivation, this series will be a homecoming of sorts for the Houston native and former Longhorn. His 31 points in the decisive game six of the conference finals were paramount to Cleveland's success, and if he can pull an encore performance, San Antonio has quite a nuisance on their hands.

San Antonio center
The pivot spot is more or less the only Cleveland position not occupied by LeBron worth consistently defending, with Zydrunas Ilgauskas and Anderson Varejao. Big Z has shaken off his past foot woes, and can still wreak havoc in the middle when left uncovered, while Varejao is a high-energy player with an uncanny knack for disrupting game flow. This season, the Spurs have toyed with the likes of Fabricio Oberto and Francisco Elson in the middle. Not quite David Robinson, eh? Sure to face double-teams in the post, Duncan could use all the help he can get down low, and if one of the ho-hums can step up, a breakout contribution is more than possible.

Andrew's Pick: Spurs in 5
The Spurs are a veteran team that has proven its postseason mettle time and again. LeBron alone can win a game or two for the Cavs, but San Antonio's experience and depth are just too much. Fundamentally sound (read: boring) basketball emerges victorious once again, as Tim Duncan and friends add another ring to their increasingly heavy hands. Sure enough, King James will get his ring sometime down the road. Just not in 2007.

Nitin's Pick: Cavaliers in 7
Nope, not crazy. The King drew the attention of the entire Piston's line-up, with top defender Tayshaun Prince taking the lead role in guarding him. Bruce Bowen may play the most annoying defense in the league, but he can't be expected to be so much more effective than Prince. LeBron will leave emerging guard Daniel Gibson and Larry Hughes to rip open the Spurs with perimeter shooting. Hughes and James have been running the team for much of the postseason, so the Cavs have a major size advantage at point guard over Tony Parker. The main worry will obviously be Tim Duncan. The combined efforts of Zydrunas Ilgauskas, Drew Gooden and Anderson Varejao will be able to slow him down, at least off of the glass rebounding. Oh, and Varejao will out-flop Ginobili in a series that will surely evoke memories of the World Cup and make Vlade Divac proud.