2005 spring fashion: open up your mind and set your clothes free 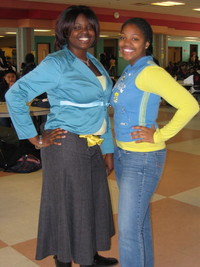 Photo: Junior Brittney Winston poses with Dominque Scott (left) who is wearing a pair of gauchos which were a big hit with teens this spring.

Photo: Junior Brittney Winston poses with Dominque Scott (left) who is wearing a pair of gauchos which were a big hit with teens this spring.

For the spring's cool breezes, you need cool clothes, and this spring, different people are finding various ways to express their style. However, most are choosing to go Bohemian. As the saying goes - what goes around comes around - and the 1960s are back. According to many Blazers, Bohemian, or hippy style, is very popular this year, and polo shirts, bright colors, big bags and jewelry are major hits as well.

The trend doesn't stop there. Blazers, too, have become drawn to the Bohemian look. Junior Deanna Funes says that this year's outfits should be based on the Bohemian style but should also be "simple" and heavily accessorized, preferably with big shoulder bags and excessive bracelets and necklaces. "I think the accessories make the clothes. You wear like a white tank top and dark blue jeans, then accessorize," says Funes, adding that white is also a must-have. 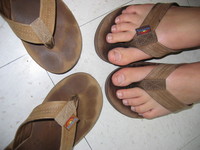 Photo: Rainbow flipflops are very popular with Blazers this year.

Photo: Rainbow flipflops are very popular with Blazers this year.

Style.com's 2005 Spring Trend Report also shows that white is being widely used by designers this season, although junior Sarah Durivage-Jacobs disagrees. "I think definitely the biggest color this spring is green," says Durivage-Jacobs, who recounted a night when she went out with friends, and they unknowingly all wore green. She also says that Rainbow flip-flops, Seven jeans, D-ring belts made from ribbon with a loop in the center and expensive polo shirts are all very fashionable - as are Lacoste, Ralph Lauren and Lilly Pulitzer. "Basically any polo that costs over $60 is in," says Durivage-Jacobs. 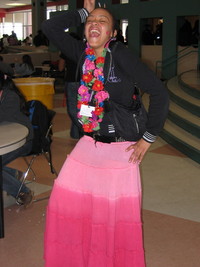 Photo: Freshman Tiara Sanderson is wearing a Bohemian style skirt - one of the trends that many Blazers are opting for this spring.

Photo: Freshman Tiara Sanderson is wearing a Bohemian style skirt - one of the trends that many Blazers are opting for this spring.

Senior Rachel Cooper says that the style this spring is more about individuality than anything else. "This is a season where you can be bold," says Cooper, naming "hippy stuff, big chunky jewelry and aviators" as just a few things she's seen. "This is a good season to be individual. I see a lot of people coming out and doing their own thing. There is no prototype." In addition, Cooper says that mini-skirts are taking a major step back to long Bohemian skirts.

While Cooper has seen a variety of styles this year, other Blazers have picked up on a few specific trends. There are four items that junior Christiana Cassell believes are 2005 spring must-haves: turquoise, gold, thong sandals and gauchos, which are loose fitting capris that flare out at the bottom. Tracy Whiting, manager of Last Stop in Prince George's Plaza Mall, also says that gauchos are popular with teens this spring, although she believes that cut-off-jean mini-skirts are still stylish. 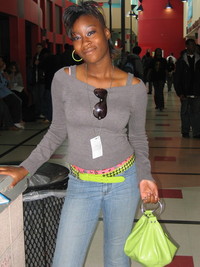 Photo: Junior Janaye Lamadine is wearing green- a color that is thought to be very fahionable this spring.

Photo: Junior Janaye Lamadine is wearing green- a color that is thought to be very fahionable this spring.

Safari wear is also vital fashion this season, according to Vongell Lugo, manager of Gap at Montgomery Mall. "[This spring,] our whole marketing concept was based on safari. We sold a lot of khaki, wide leg trousers and safari jackets," says Lugo, adding that bright colors, mainly pinks, pastels and yellows have become extremely trendy.

Junior Brittney Winston believes, on the other hand, that the polo look, tunics and beaded Mediterranean shoes are fashionable this spring. Marisha Walker, manager of Up Against The Wall at Wheaton Mall, agrees. "There is a lot of Bohemian style going on, a lot of tunics," says Walker. She listed many trendy clothes for the spring season including military-style jackets, glittery jewelry and white pants.

As the spring breezes continue to blow, Blazers continue to choose different routes to dress fashionably, and according to Blazers, this spring is all about bright colors, the Bohemian look and expressing your own sense of style.