Blair alumnus Matt McCutchen won a gold medal by placing ninth in the gold division at the International Olympiad in Informatics (IOI) competition in Zagreb, Croatia, held from August 15 to August 22.

The International Olympiad in Informatics is one of the most prominent computer science competitions in the world. Contestants are expected to show skills at problem analysis, algorithm design, and programming and testing of their solutions. 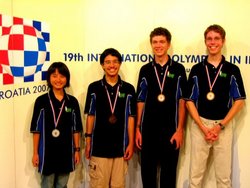 Photo: McCutchen, first from right, stands with the USA team as they display their medals at the IOI. Photo courtesy of Brian Dean

Photo: McCutchen, first from right, stands with the USA team as they display their medals at the IOI. Photo courtesy of Brian Dean

In order for McCutchen to qualify for the IOI competition, he was required to participate in a series of events run by the USA Computing Olympiad (USACO). USACO holds competitions every month from October to March, concluding in the five hour, proctored US Open. Using the US Open scores, USACO then invites the top sixteen contestants to the USA Invitational Computing Olympiad (USAICO) held in Colorado. This year, Blair students made up three of the top sixteen: McCutchen, senior Louis Wasserman, and sophomore Scott Zimmerman were invited. The USAICO holds a week of competitions to determine the four members of the USA IOI team.

McCutchen placed first at the USACO event and the USAICO event, where he earned a position as one of the members on the USA IOI team. The USA team traveled to Zagreb, Croatia, where McCutchen placed ninth.

Last year McCutchen participated in the same computer science competitions and received a silver medal, placing 37th. Two years ago, McCutchen received his first gold medal by placing sixteenth in the IOI. While many participants compete in the IOI once, just shortly after their senior year, McCutchen has competed in the event three times.

McCutchen is no longer eligible for the IOI competitions now that he is in college at the University of Maryland, but said he still has future plans for competing. "I'm going to compete in the Association of Computing Machinery (ACM) competition along with the International Collegiate Programming Contest," said McCutchen. "It's trickier and cleverer than the IOI competitions, but I have a really good starting point," he said.