A guide to pro basketball's most entertaining weekend 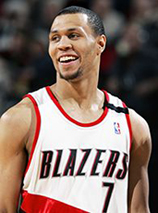 Photo: Guard Brandon Roy of the Portland Trail Blazers leads the Sophomores against the Rookies in New Orleans. The Sophomores have won the last five contests.

Photo: Guard Brandon Roy of the Portland Trail Blazers leads the Sophomores against the Rookies in New Orleans. The Sophomores have won the last five contests.

NBA tradition pits some of this year's best rookies against gifted sophomores who have one year of experience under their belts. Portland guard Brandon Roy, the reigning T-Mobile Rookie of the Year, will lead rising talent such as Boston guard Rajon Rondo, Memphis forward Rudy Gay and Cleveland guard Daniel Gibson for the sophomore team. The sophomores have a five-game win streak in this event, but they face a tough rookie team this year. The team consists of, among others, Seattle forwards Kevin Durant and Jeff Green, Milwaukee forward Yi Jianlian, Toronto forward Jamario Moon and Atlanta center Al Horford. Full rosters can be found here. Expect a high-offense, low-defense game as some of the league's youngest stars square off. 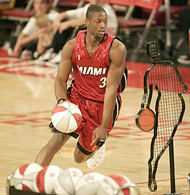 Photo: Dwayne Wade weaved through the Skills Challenge course to the 2007 crown and returns this year to try to take it for the third time.

Photo: Dwayne Wade weaved through the Skills Challenge course to the 2007 crown and returns this year to try to take it for the third time.

The Playstation Skills Challenge is a test of pure skills and agility. Four of the league's top ball handlers take their game to this full court obstacle course to show why they run offenses. Contestants are timed as they go through the following stations:

Obeying regular NBA rules, competitors must navigate the course in the above order to qualify for advancement. The two players with the best times get through to the final round.

Pro basketball cities send a NBA, WNBA, and retired NBA player to the Haier Shooting Stars Competition to bring glory back home in another offense-oriented show. Each of the four teams is timed as they shoot from six spots around the court:

Teams are required to designate a rotation for the first five shots so each player shoots from either one or two spots. The half-court shot can be taken by each player until made. The two teams with the fastest times advance to the final round to go head-to-head. 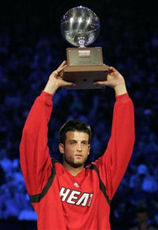 The NBA's top snipers gather to shoot the lights out from beyond the arc at the Foot Locker Three-point Shootout. Without any defense, any of the contenders can knock down the open three, but the spotlight of this contest turns up the pressure. Contestants take part in a two-round competition, shooting from five racks at different spots around the three-point line in a one minute timeframe. Each rack has four orange balls worth one point per made shot as well as a multi-colored "money" ball that goes for two points. The players with the top three scores after the first round will advance to the final round, where the rules are the same. The nerves are kicked up for the advancing competitor with the lowest score – he sets the bar by starting the final round. 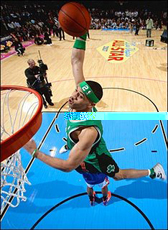 Photo: High-flying Gerald Green of the Minnesota Timberwolves swept away the competition at the 2007 Dunk Contest with a windmill slam in the final round.

Photo: High-flying Gerald Green of the Minnesota Timberwolves swept away the competition at the 2007 Dunk Contest with a windmill slam in the final round.

Sprite's Slam Dunk Contest is perennially the most watched event at All-Star Weekend, as four of the NBA's most gifted athletes put on a show of dazzling dunks. The competition features two rounds, each in which participants have the opportunity to try two different dunks for different scores. Each competitor is given two minutes to complete a dunk, after which two final attempts may be made before a low score is dished out. This year, fans are given the majority of control in picking which two contestants will advance from the first round. A panel of judges, typically consisting of slam-greats, also helps decide who moves on.

The competition this year has been spiced up by internet previews available on YouTube showcasing the creativity of some competitors. Jamario Moon appears ready to leap from past the free-throw line, while the NBA denied Dwight Howard's request to have the contest rim raised to 12 feet for his dunks. Everyone is ready to defy gravity this weekend.

Unlike the NFL's Pro Bowl, the NBA All-Star Game attracts a large audience that can appreciate the both the individual talents and team efforts in professional basketball. The NBA's best gather on the same court in a show never falling short of enough alley-oops, wild shots and no-look passes. Fans vote for the five starters for each conference, while the NBA's 30 coaches decide the reserves and commissioner David Stern replaces injured players with his own picks. The head coaches on the teams with the best records in each conference are selected to lead the two teams. 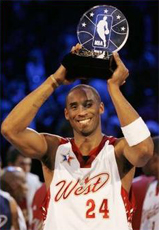 Photo: Last year, the West dominated the East 153 to 132 in the Las Vegas All-Star Game. Kobe Bryant scored 31 points to earn him the MVP award and looks to repeat again.

Photo: Last year, the West dominated the East 153 to 132 in the Las Vegas All-Star Game. Kobe Bryant scored 31 points to earn him the MVP award and looks to repeat again.

Players rarely play defense until the fourth quarter, when each side plays as though a playoff seed is on the line. As a result, the All-Star Game generally ends with a huge amount of points scored; the last time a team scored fewer than 100 points was in 1973.

All photos courtesy of Getty Images.