This year's NFL draft was filled with surprises and unexpected picks

The National Football League (NFL) always has ways of surprising fans, whether it is a league-wide shutdown or the Seattle Seahawks in the playoffs. This year's NFL draft was no different from the many shocks the NFL throws at fans daily. 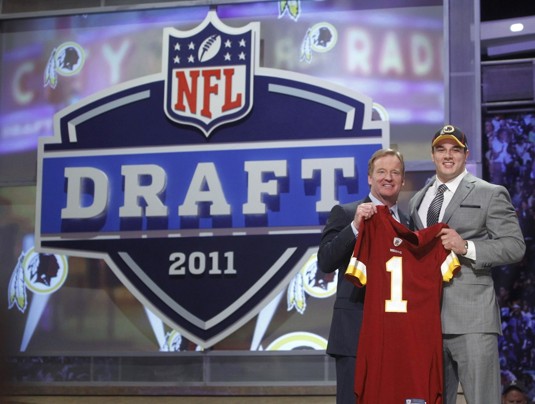 Photo: Ryan Kerrigan was the first draft pick made by the Washington Redskins in this seasons draft.

Photo: Ryan Kerrigan was the first draft pick made by the Washington Redskins in this seasons draft.

For the most part the draft went as scheduled. NFL scouts analysts and ex-coaches correctly predicted the first five draft picks, which included quarterback Cam Newton going to the Carolina Panthers, linebacker Von Miller to the Denver Broncos, defensive tackle Marcel Dareus to the Buffalo Bills, wide receiver A.J. Green to the Cincinnati Bengals and cornerback Patrick Peterson to the Arizona Cardinals.

For the local Washington Redskins fans, the draft might have made have been a little frustrating, especially since current quarterback Donovan McNabb did not seem to deliver last season as expected. The Redskins are known for making flashy picks of big named college players, but instead they chose to be more conservative and trade their high draft picks in exchange for more overall picks throughout the draft.

The Skins did take defensive end Ryan Kerrigan, a solid football player and most likely will be a great addition to the team, in the first round with the Jaguars' original pick which they acquired in a trade, along with Jacksonville's second round pick. The Baltimore Ravens also made a splash by drafting local University of Maryland talent Torrey Smith, a wide receiver selected in the second round.

But it was the sixth first round draft pick when the NFL started to surprise fans.

The Cleveland Browns originally had the sixth pick, but traded the pick back to the Atlanta Falcons for several picks in this draft and next year's draft. Because of this dramatic switch, the Falcons drafted wide receiver Julio Jones.

The New Orleans Saints traded back into the first round to snag running back Mark Ingram, whom the Saints desperately needed. 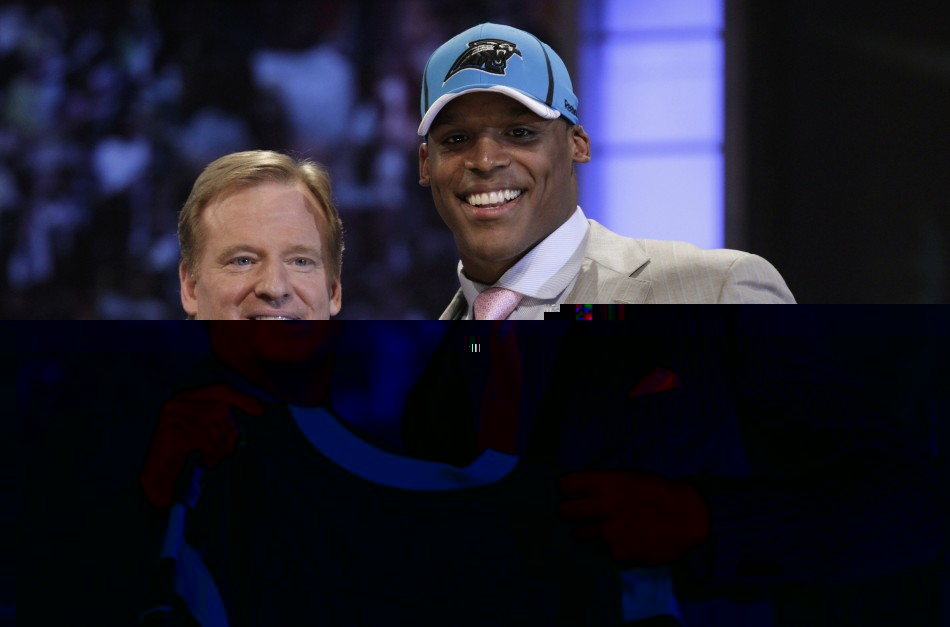 Photo: The Carolina Panthers had the first pick in the draft, where they chose quarterback Cam Newton. Quarterbacks were a huge commodity in the draft this year.

Photo: The Carolina Panthers had the first pick in the draft, where they chose quarterback Cam Newton. Quarterbacks were a huge commodity in the draft this year.

Defensive tackle Nick Fairly was projected to be in the top five draft picks, but fell to the 13th pick when the Detroit Lions drafted him. The Lions seem to be building up an already solid defensive team, especially after drafting Defensive Rookie of the Year Ndamukong Suh last year.

Not all players were lucky enough to be selected in the first round, such as, Da'Quan Bowers, a player once considered the best player in the draft, who wasn't picked up until the second round by the Tampa Bay Buccaneers because of signs of a knee injury.

The NFL did not stop there - it seemed as if coaches had their priorities mixed up or at least had not done the proper research. The seventh overall pick was Alden Smith, a talented defensive end coming out of Missouri.

Although Smith has the talent to make it in the NFL, he was not considered top 10 talent by most of the experts and his draft pick as number seven left fans mouths dropped to their living room floors. The San Francisco 49ers drafted Smith, but were expected to use their high draft pick to snatch a quarterback.

Speaking of quarterbacks, the Tennessee Titans selected Jake Locker, a quarterback coming out of Washington with their eighth draft pick. This was the defining moment of the draft and it showed the unpredictability of the NFL.

NFL Network analyst Michael Lombardi said this year's draft was a bad quarterback year, but a lot of quarterbacks ended up being drafted anyway. Locker's draft pick was surprising especially since many considered him a second round draft pick, as well as him going into a higher pick than Missouri quarterback Blaine Gabbert. Gabbert was expected to be drafted much sooner, and especially before Locker, since he is considered one of the best quarterbacks in the draft, but he wasn't selected until the 10th pick by the Jacksonville Jaguars, who traded up with Washington who originally held the 10th overall pick in the draft. 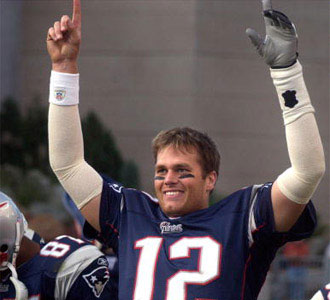 Photo: The New England Patriots drafted yet another quarterback this year; hopefully, he will learn under the legendary and future hall of fame star, quarterback Tom Brady.

Photo: The New England Patriots drafted yet another quarterback this year; hopefully, he will learn under the legendary and future hall of fame star, quarterback Tom Brady.

The quarterback wave continued into the 12th pick. The Minnesota Vikings had a plan going into the draft, especially about getting a new quarterback since Brett Favre's return to football is unlikely. The Vikings drafted quarterback Christian Ponder, which seemed like an early decision, but they got caught up in the craze for a quarterback and didn't think that they could wait another round.

However, the other NFL teams seemed to forget about quarterback Ryan Mallett, who wasn't drafted until the third round by the New England Patriots. Mallett was considered first round talent, and the majority of experts were shocked he seemed forgotten until Bill Belichick scooped him up. Hopefully for New England, Mallet will become the heir to Tom Brady's throne.

And we can only hope that this year's draft class will showcase their immense talent in the upcoming NFL season, and work for their spots on the team that worked so hard to draft them. Despite all of the surprises, lockdown and all, there are high hopes for the future of the NFL.