A diverse and interesting group of Republicans has announced its candidacy for the 2012 presidential election. The candidates have been debating each other since May, but sometimes they seem more like "Saturday Night Live" characters than people actually running for office. 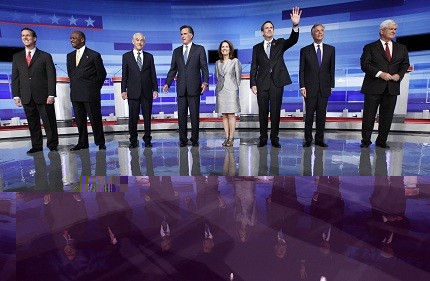 Photo: From being pizza chain CEOs to having good hair, this election's presidential hopefuls each bring something different to the table.

Photo: From being pizza chain CEOs to having good hair, this election's presidential hopefuls each bring something different to the table.

Meet some of the "candidates"

Rick Perry is the current governor of Texas. He is a conservative Christian who sets himself apart from the other candidates by ordering Texan girls to receive HPV vaccines and giving in-state education to the children of illegal immigrants. During a recent debate, Perry was very proud to announce that he oversaw 234 executions as governor (more than any other governor in modern times), to which the audience burst into applause. He has also boasted about the fact that he once shot down a coyote while out on his morning jog (so many questions arise… like, where does he even keep the gun?).

Michele Bachmann is a member of the U.S. House of Representatives in Minnesota. She is one of the biggest supporters of the Tea Party movement and was the winner of the Iowa straw poll in August. Her husband, Marcus Bachmann, has a Christian counseling business that was recently caught on tape trying to convert a gay man to heterosexuality. Michele herself once accused "The Lion King" of having a gay agenda. "A very effective way to do this [normalization of gayness] with a bunch of second graders is take 'The Lion King' for instance, and a teacher might say, 'Do you know the music for this movie was written by a gay man?' The message is: 'I'm better at what I do, because I'm gay'." she said. She and her husband have also raised five biological children and 23 foster kids.

Herman Cain has never had any political experience but was the CEO of a pizza chain company, proving that he's got the business sense to run our economy. Cain's best attribute is his strong Southern accent that always sounds like he's saying something sassy, especially when he is referring to global warming as "poppycock." Multiple times, including during debates, Cain has quoted "The Power of One," a song recorded by Donna Summer for "Pokémon: the Movie 2000."

Ron Paul is a member of the U.S. House of Representatives from Texas. He is a strong Libertarian and an avid Tea Party supporter. During a recent debate, the prompter asked Paul if he would let a man die because he didn't have insurance. Before Paul even got a chance to answer, the audience began clapping and one man let out an enthusiastic "YEAH!" Paul seems to get a little angrier and crankier with each debate. He is also against putting up fences along the Mexican border because it would "trap" us. "Every time you think about the fence keeping all those bad people out, think about those fences maybe being used against us, keeping us in." he said.

Rick Santorum is the former U.S. Senator of Pennsylvania. He is arguably the most conservative of the bunch and is one of the strongest opponents of homosexuality: he compared loving your child to gay marriage. "Is anyone saying same-sex couples can't love each other? I love my children. I love my friends, my brother. Heck, I even love my mother-in-law. Should we call these relationships marriage, too?" he said. Because of his views against homosexuality, the name "Santorum" has taken on a whole new meaning (see Urban Dictionary for further detail).

Mitt Romney is the former governor of Massachusetts. He is one of the two Mormon GOP candidates, which is raising controversy. But while there's nothing wrong with his religious preferences, there is something seriously wrong with the story he told about strapping his dog to the roof of the car on a road trip. Romney has also weirded everyone out by wearing skinny jeans (just picture that for a second). Let's be honest though, he's got hair like an aged Disney Prince.

Jon Huntsman is the former U.S. Ambassador to China and a Mitt Romney look-a-like. They've got similar hair and are both of a minority religion, so it should be no surprise that the two are actually third cousins. Huntsman's only oddity is that he dropped out of high school to play the keyboard in a rock band called "Wizard."

There you have it, the 2012 republican candidates who each believe they can beat Obama. It's still early, though, so who knows who else will join this entertaining spectacle.