Keeping you up to speed on the best thing about Saturdays

Overshadowed by the pros, college football is seemingly neglected and seen as a lesser sport because the players are amateurs. In reality, college football is just as exciting and entertaining as the NFL. It's arguably the second most popular sport in America right now and the gap between college and pro football isn't as wide as people think. If you're not glued to the screen during college football Saturdays in the fall, you're missing out on some of the greatest traditions, rivalries and moments in sports. 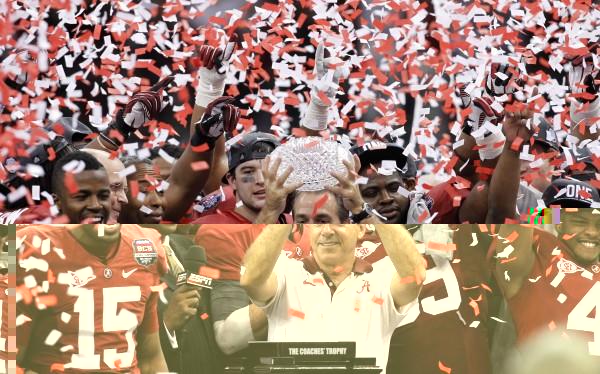 Photo: Alabama seems to be poised for another great year.

Photo: Alabama seems to be poised for another great year.

Why? This could potentially be the best offense Alabama has had in years, and it's this side of the team that is, for once, the better half. For a team long known for dominating defense could be as explosive as any in the conference. Defensively, they did lose key pieces, but they've recruited well and have capable replacements.

Concerns: There aren't many questions on this Alabama team, but they have lost 3 players to an offensive line that many say was one of the greatest in college football history. There are depth concerns along the defensive line with the departures of four of their top seven linemen, but the size and talent is there.

2. Oregon Ducks
Why? Offensive mastermind and former head coach Chip Kelly is gone, but offensive coordinator Mark Helfrich has taken over the reins as the new head coach. This continuity should sustain the potency of the Oregon offense. The bigger issues on this team are on the defensive side of the ball, but the secondary should be a strength, where there is depth and talent. Cornerbacks Ifo Ekpre-Olomu and Terrance Mitchell headline a defensive backfield that led the nation in picks last year.

Concerns: There aren't many here, but the front seven (defensive linemen and linebackers) did take a hit with the departures of first round pick Dion Jordan and linebackers Kiki Alonso and Michael Clay.

3. Stanford Cardinal
Why? Stanford has become one of the top programs in the country with their physical, smash-mouth style on both sides of the ball. Stanford returns 4 starters, led by standout guard David Yankey, and 82 career starts to one of the best offensive lines in the country. In the defensive front seven, the Cardinal bring back 5 starters that were part of a unit that led the nation in sacks and tackles for loss and were fifth in rush defense.

Concerns: Finding playmakers at wide receiver has been an issue for a few years now and this year is no exception. The wide receivers also must be more productive in order to help out their young quarterback. Sophomore quarterback Kevin Hogan needs to prove that he's more than a game manager, especially in a league that emphasizes offense. 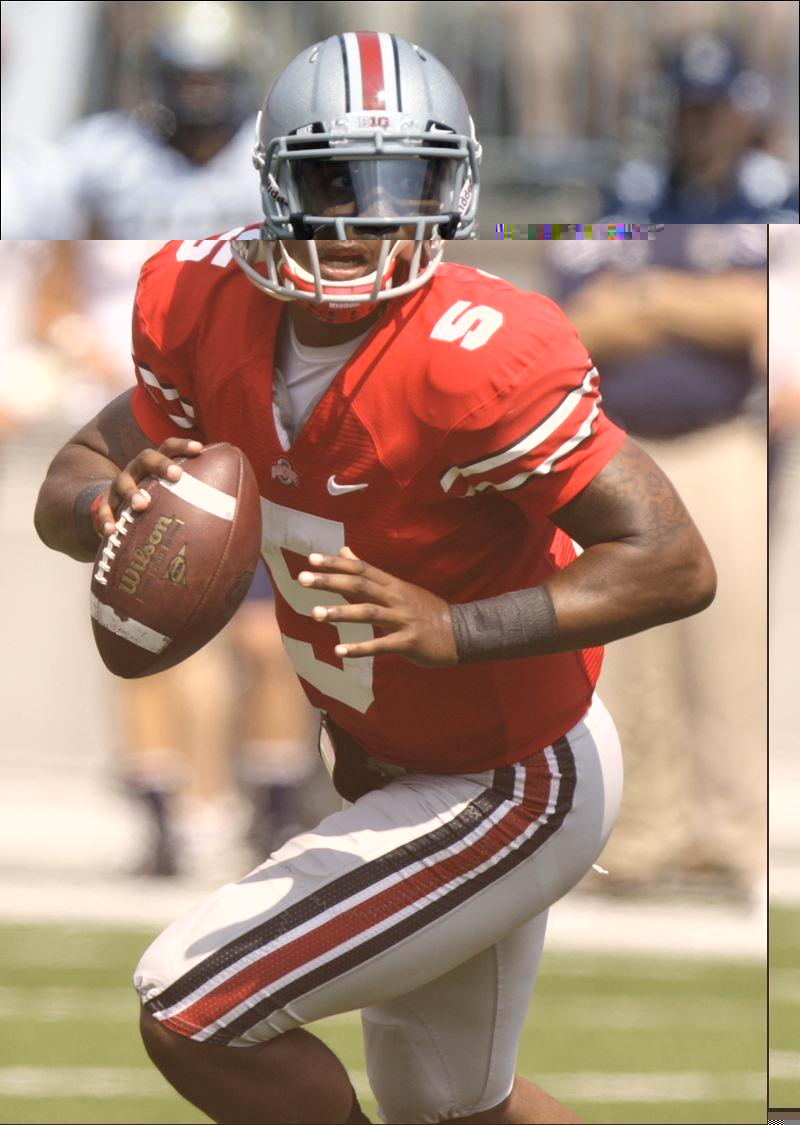 4. Ohio State Buckeyes
Why? NCAA sanctions prevented Ohio State from getting a shot at a national title last year after going undefeated, but now that the punishments have been lifted, Coach Urban Meyer and his team enter the season with plenty of preseason hype. Quarterback Braxton Miller is back and should thrive in Meyer's spread offense, which relies on the quarterback's ability to run and throw. Defensively, they have some holes, but the talent is there.

Concerns: The biggest issue for the Buckeyes is still their defense. They lost 7 starters, including two of three starting linebackers and all four starting defensive lineman.

5. Florida State Seminoles
Why? Is this the year when Florida State finishes the season with a chance at a national championship? Or will they get upset once again and get knocked out of contention? They return of four starters on the offensive line as well as the productive duo of James Wilder Jr. and Devonta Freeman in the backfield will help out the Seminoles' new quarterback Jameis Winston. Despite losing six starters to the NFL on defense, the Seminoles have plenty of players with experience returning.

Concerns: The biggest question is the quarterback play. Jameis Winston impressed in camp, but no one really knows how well he'll do in games that matter. Also, can the Seminoles go through an entire season without blowing games that they're supposed to win?

6. Clemson Tigers
Why? Dual threat quarterback Tajh Boyd, who threw for almost 4000 yards and tossed 36 touchdowns last year, returns for his senior season to lead the best team in the ACC. He and wide receiver Sammy Watkins look to blow up scoreboards across the nation, and the ever-improving defense brings back several contributors to the front seven, namely defensive ends Vic Beasley and Corey Crawford.

Concerns: Outside of Watkins, the Tigers don't have any consistent receiving threats. As for the secondary, only one starter returns and other than that there isn't much depth. The pass defense might be a bit shaky this year.

7. Georgia Bulldogs
Why? This might be a little high for a Georgia team that lost nearly every starter from last year's defense, but I put them here because of my supreme confidence in the Georgia offense, especially senior quarterback Aaron Murray. Murray is on the verge of breaking almost every significant SEC passing record and is surrounded by a plethora of weapons. Defensively are where the unknowns lie, but Georgia continues to recruit well and has talented replacements like safeties Tray Matthews and Josh Harvey-Clemons.

Concerns: Like I said, the defense lost a lot from last year's team, 8 starters to be exact (many of whom went to the NFL). Though talented, the defense is very young and lacks a ton of experience on the interior defensive line.

8. Texas Longhorns
Why? This team is full of talent, and the only question is if they can play up to their potential. The Longhorns bring back 19 starters and have talent all over the field. All they need is for the tackling and run defense to improve and for junior quarterback David Ash to play consistently. On defense, Texas has stars all over the field like linebacker Jordan Hicks, defensive end Jackson Jeffcoat, and cornerback Quandre Diggs.

Concerns: The biggest question is whether the defense can eliminate mistakes. Last year, especially against Oklahoma, the Texas defense's shoddy tackling and poor run defense was exposed. 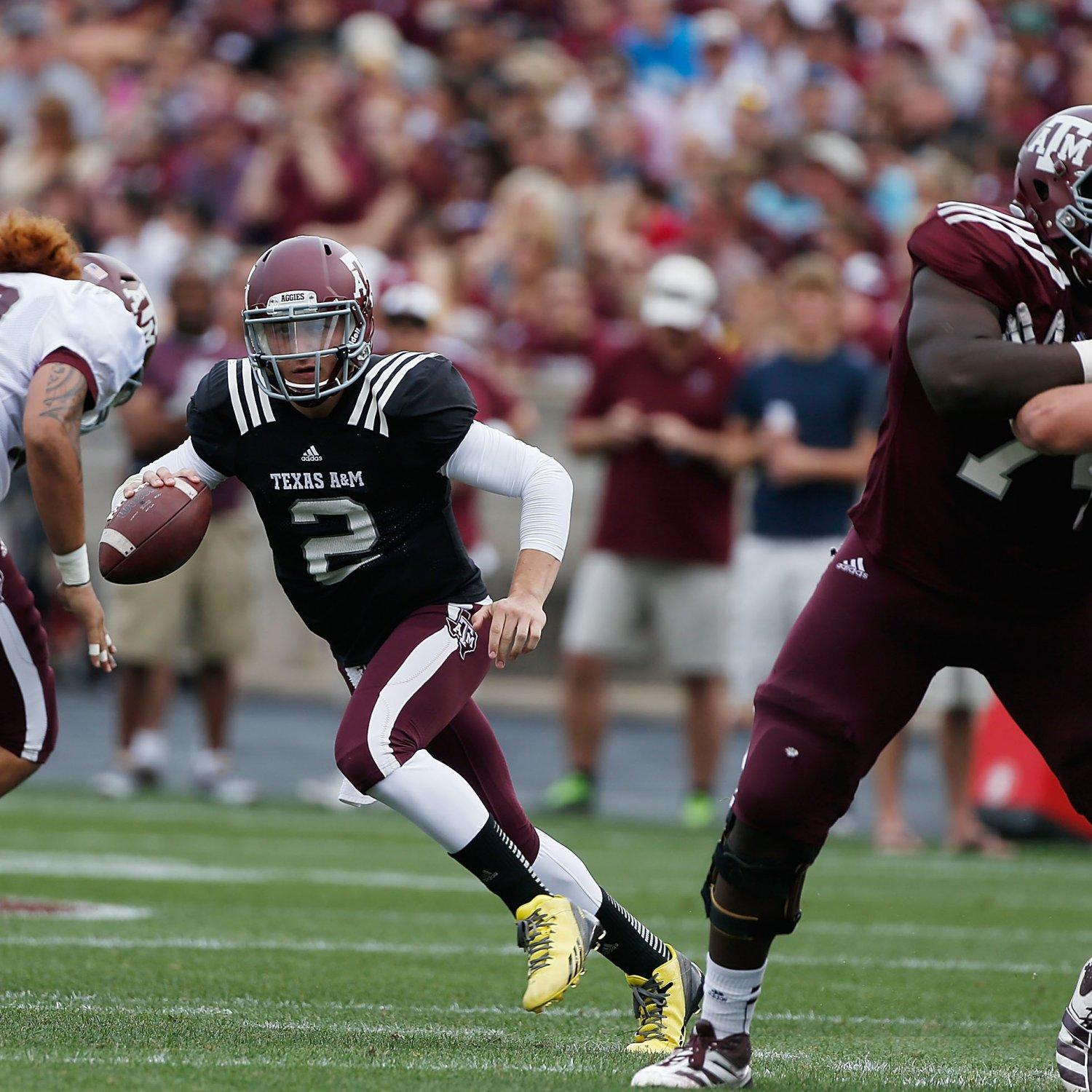 Photo: Johnny "Football" Manziel will look to put his offseason controversy aside and defend his Heisman trophy.

Photo: Johnny "Football" Manziel will look to put his offseason controversy aside and defend his Heisman trophy.

9. Texas A&M Aggies
Why? Johnny Football. Need I say more? Ok, for those who don't know, I'll elaborate a little bit more. Reigning Heisman trophy winner Johnny "Football" Manziel returns in order to build on a season where he totaled over 5000 yards of total offense in the toughest conference in the country. He has a good group of running backs to hand the ball off to and plenty of talent wide receiver, including 6'5'' sophomore Mike Evans.

Concerns: The defense is a big concern for me, more so than Georgia because the Aggies haven't reached the Bulldogs' level of recruiting. The Aggies lost several key pieces to last year's defense, including defensive linemen Damontre Moore and Spencer Nealy as well as linebackers Johnathan Stewart and Sean Porter.

10. Florida Gators
Why? As is the calling card in the SEC, Florida wins with a physical offense and stingy defense. The offensive line is deeper and more athletic, and behind the big boys up front is a good group of young running backs headlined by starter Matt Jones. And though Florida lost important pieces on defense to the NFL draft, like Georgia, they have the talent to fill the voids left by the likes of defensive tackle Sharrif Floyd and linebacker Jelani Jenkins and the secondary is one of the best in the SEC.

Concerns: The major concerns lie on offense, where junior quarterback Jeff Driskel has a dearth of weapons to throw to. Many times last year, Florida's offense was clearly one-dimensional relied wholly on the running game to move the ball. The Gators haven't gotten much production out of their wide receivers the last few years, and unless five star recruit Demarcus Robinson (6'2'', 201 pounds) can excel in his freshman year, those receiving woes look to continue.

The Frontrunners
Johnny Manziel, QB, Texas A&M Aggies
2012 Stats: 68% completion percentage, 5116 total yards, 26 TDs/9 INTs
The reigning Heisman trophy winner returns for his second season as Texas A&M's starter, and he's one of the favorites to be the first to repeat since running back Archie Griffin in 1975. He retains key pieces of his supporting cast from last season, namely 6'5" wide receiver Mike Evans and offensive tackle Jake Matthews, and he has a deep backfield to help keep the pressure from opposing defenses off of him. But the fact that he's already won, as a redshirt freshman at that, will mean that expectations for this season will probably be unreasonably high.

Braxton Miller, QB, Ohio State Buckeyes
2012 Stats: 2039 passing yards, 15 passing TDs, 1271 rushing yards, 13 rushing TDs
A second year in Urban Meyer's spread offense will help the Buckeye's super athletic, dual threat quarterback. His team is highly ranked to start the season, and they're expected be squarely in the hunt for a national championship, so he'll have plenty of opportunities to impress Heisman voters. If he can improve the passing aspect of his game, he should be able to terrorize defenses even more in tandem with his fleet-footed running ability.

Tajh Boyd, QB, Clemson Tigers
2012 Stats: 67.2% completion percentage, 3896 passing yards, 36 TDs/13 INTs
Clemson's senior quarterback leads an explosive offense and is on a team that is firmly in contention for a BCS bowl game. Those two factors alone could place almost any player in the Heisman race, but add in the fact that Boyd threw for almost 4000 yards and 40 touchdowns, and there is no doubt that he is one of the leading candidates for college football's most prestigious award.

Marcus Mariota, QB, Oregon Ducks
2012 Stats: 68.5% completion percentage, 3429 total yards, 37 total TDs/6 INTs
The sophomore quarterback was a bit overshadowed last year by fellow redshirt freshman sensation Johnny Manziel, but Mariota was still able to grab the eyes of the entire nation. Back in Oregon's fast-paced, spread attack, Mariota will have the opportunity to once again put up monster numbers, especially with many of last year's offensive weapons returning. 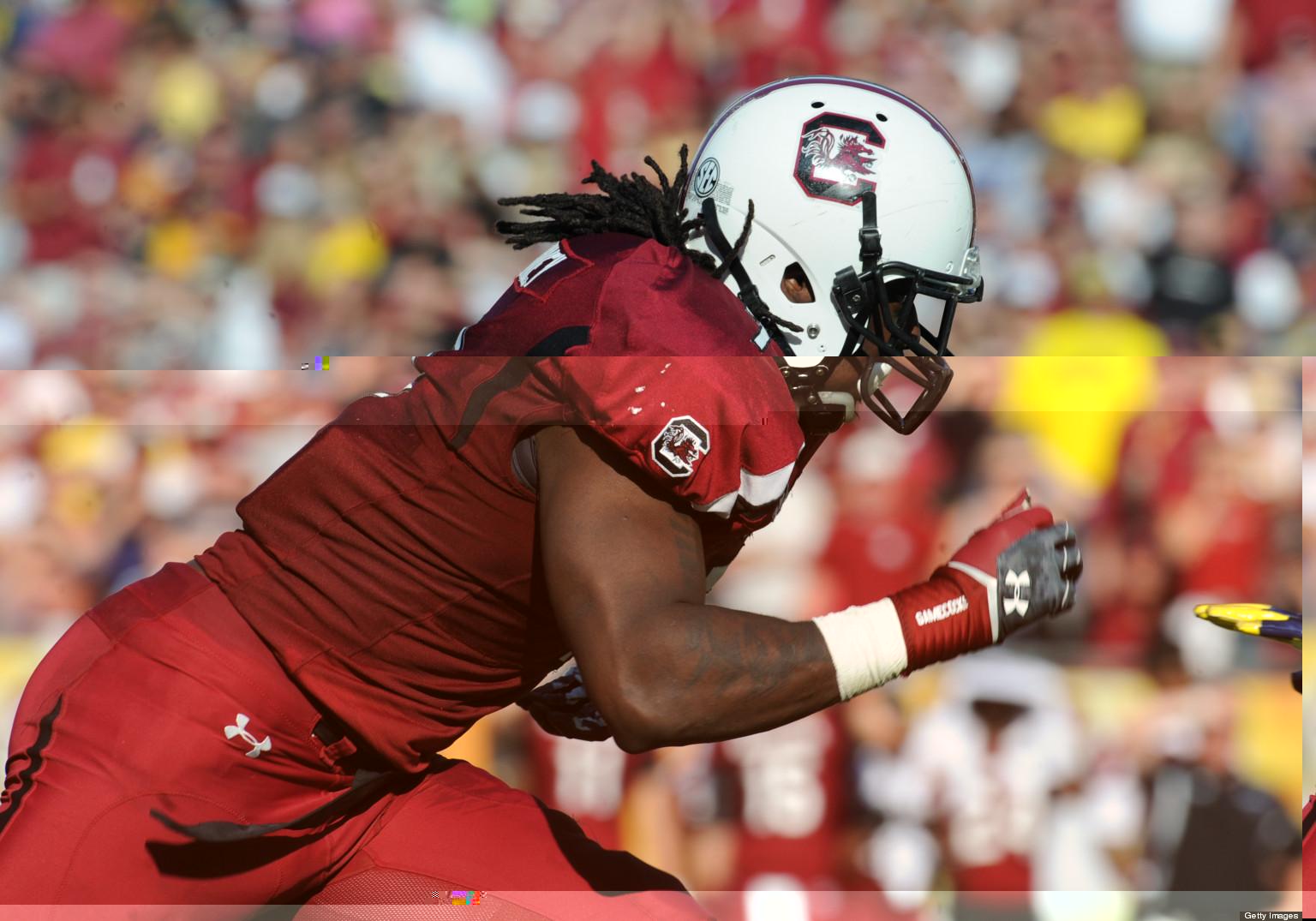 I'm scared of this Clowney

Jadaveon Clowney, DE, South Carolina Gamecocks
2012 Stats: 54 tackles, 23.5 tackles for loss, 13 sacks
I'm putting Clowney, the nearly consensus preseason #1 pick in next year's NFL draft, in this category because of the enormous hype surrounding him this year, which will help keep him in the minds of Heisman voters. Though it's so difficult to win the award as a defensive player (the last primarily defensive player to win was Charles Woodson in 1997), Clowney is the second biggest name in college football, and likely the best pure player in the country.