After an endless summer, the Major League Baseball (MLB) season ended with a bang on Sept. 28, with a final farewell to Derek Jeter and a no-hitter by Jordan Zimmermann. After the long journey of surprises of a 162 game season, the dust has finally settled and only 10 teams are left. SCO takes a look at who we think will be the big winner this October.

Oakland Athletics over Kansas City Royals (AL)
For a team that had one of the worst collapses in baseball history, finishing the last two months of the season with a 22-34 record, they're not that bad. Even though the Athletics have one of the best pitching rotations in the playoffs, this is a one game series and it's all down to Jon Lester. Lester was on the championship Red Sox team last season and sports a 2.11 Earned Run Average (ERA) in 13 postseason appearances. To add to that, Lester is 9-3 in his career against the Royals with a 1.84 ERA. His slated opponent is James Shields, who has a mediocre 4.98 ERA in the playoffs. Ultimately, pitching wins the game and the Athletics should scrape by into the American League Division Series.

San Francisco Giants over Pittsburgh Pirates (NL)
Again, pitching wins the matchup, and Madison Bumgarner should beat Edinson Volquez and the Pirates. While the game is in Pittsburgh, Bumgarner has had no trouble pitching on the road this season, going 11-4 with a 2.22 ERA in 18 road starts. Volquez on the other hand, has only one career playoff appearance in which he went 1.2 innings giving up four runs. But it must be noted that the Pirates are 51-30 this season at home. This game could go either way, but the experience of the 2010 and 2012 World Series winning Giants gives them the edge.

(1) Los Angeles Angels over (WC) Oakland Athletics
While the Angels pitching rotation is weak, Matt Shoemaker was a pleasant surprise this season going 16-4 in his rookie campaign. He is currently sidelined with an oblique injury, but if he can pitch in this series with C.J. Wilson and Jered Weaver, the staff will hold down the A's to win the series handily. Over the past two years, the Athletics have not played good baseball in October, and have lost in the ALDS two years in a row. The Halos did win 5 of the last 6 meetings between these two teams and finished 10 games up on the A's in the AL West standings. Angels take the series in four games.

(3) Detroit Tigers over (2) Baltimore Orioles
The Tigers have had their consistent struggles throughout the season, but it's no reason to sleep on them in the playoffs. With a rotation of three former CY Young award winners, including an MVP, this pitching rotation is built for the playoffs. To add to that, the Tigers have a dangerous lineup that finished first in the Majors in batting average (.277) and second in runs per game (4.67). Miguel Cabrera and Victor Martinez pose one of the most dangerous 3-4 punches in the playoffs. The Orioles however, won't go down without a fight. Nelson Cruz hit a league leading 40 homeruns and is a threat to hit one every time he steps up to the plate. But the O's have a weak starting rotation and will miss Chris Davis' bat in the middle of their lineup. Tigers win in five.

(1) Washington Nationals over (WC) San Francisco Giants
The Nationals should cruise through this series, as they carry a ton of momentum into the playoffs finishing the season 38-18. The Nats also owned the Giants this season, taking five of their seven matchups. The Nationals have a well-rounded lineup including x-factor Denard Span, who stole 31 bases and broke the Nationals single season record for hits with 184 this season. Having used Madison Bumgarner in the Wild Card game, the Giants will have to rely on Jake Peavy and Ryan Vogelsong to carry the pitching workload. On the offensive side, the Giants will be without Angel Pagan and Michael Morse, leaving them with major holes in their lineup. Nationals win in three.

(2) Los Angeles Dodgers over (3) St. Louis Cardinals
In a rematch of last year's NLCS, the Dodgers come out on top. In a must watch pitching matchup between Clayton Kershaw and Adam Wainwright, the game could go either way. But beyond those two starters, the Dodgers have the edge. The Dodgers bullpen has one of the best closers in baseball in Kenley Jansen, as well as former World Series winner Brian Wilson. Their lineup also features Runs Batted In (RBI) leader Adrian Gonzalez (116) and Matt Kemp who broke out of his first-half slump and hit .309 in the second half of the season, as well as an NL-best 17 homeruns. The Dodgers might be dangerous, but that doesn't mean it will be easy to take down the Cardinals. It seems as if the Cardinals have a knack for October baseball. However, their lineup in 2014 wasn't nearly as productive in the regular season as it was in 2013. Dodgers win in five.

(1) Los Angeles Angels over (3) Detroit Tigers
The Angels have the most potent offense in baseball. Albert Pujols had a bounce-back season with 28 Home Runs and 105 RBI. Kole Calhoun broke-out this season in the leadoff spot, and Erick Aybar and Howie Kendrick help contribute to a lineup that led the Majors in runs per game (4.77). Let's not forget the Halos biggest weapon, potential AL MVP Mike Trout. Trout can do it all, after hitting .272 with 36 Home Runs. Trout also led the American League in Wins Above Replacement (WAR) at almost 8. The Tigers, as mentioned earlier are dangerous. Every year, however, they have failed to come up big in the playoffs, failing to win the World Series three seasons in a row. The Tigers might've won the AL Central, but let's not forget it took them all 162 games to do so. Angels win in six.

(1) Washington Nationals over (2) Los Angeles Dodgers
Both of these teams are evenly matched offensively, but the Nationals have a slight edge in pitching. For the Dodgers, after Kershaw and Greinke, the rotation becomes a little flimsy. Whereas in Washington, after two aces in Stephen Strasburg and Jordan Zimmermann, the Nationals still have Gio Gonzalez, Doug Fister, and Tanner Roark to turn to. Another major difference is in the bullpens. While Kenley Jansen and Brian Wilson are great, the Nationals evenly match that with Rafael Soriano and Drew Storen. Take away all four of these relievers, and the Nationals come away with a huge edge. The Dodgers bullpen ranked 22nd this season with a 3.80 ERA, while the Nats bullpen was fourth in the Majors at 3.00. Also, the Nationals won every game against the Dodgers this season in which Clayton Kershaw did not pitch. Nationals win in six. 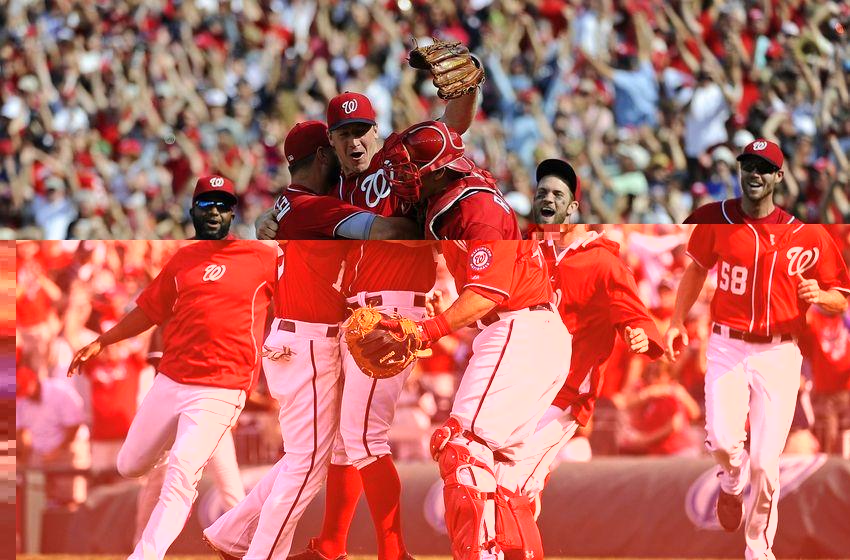 Photo: Carrying the momentum of a no-hitter, the Nationals are bound for a World Series title

Photo: Carrying the momentum of a no-hitter, the Nationals are bound for a World Series title Photo courtesy of Fansided.

Washington Nationals over Los Angeles Angels
The grand finally goes to the Nationals. Of the two young phenoms in Mike Trout and Bryce Harper, it's agreeable that Trout has made a bigger impact so far. However, thanks to a great supporting cast, Bryce Harper will win his first World Series before Trout. Just like in the NCLS, the offenses are just about even. The Nationals have the best pitching rotation in the playoffs, and it will power them through October. Right now, the Angels best pitcher is a rookie, who may or may not be hurt. Nationals win in six.