Makaveli returned from the dead at Coachella. Who should be next in line to get 'hologrammed'? 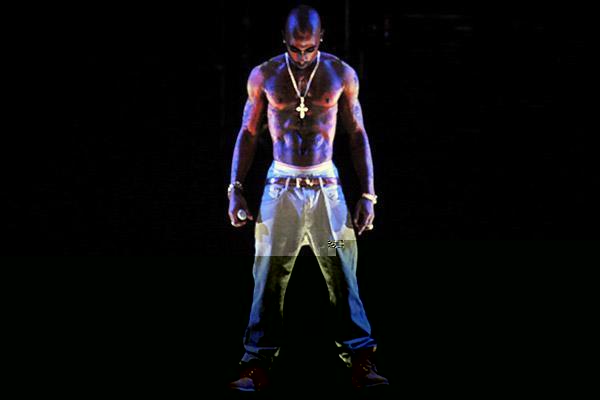 Photo: Most people enjoyed the hologram's performance at Coachella, while others found it creepy and in poor taste.

Photo: Most people enjoyed the hologram's performance at Coachella, while others found it creepy and in poor taste.

Since Tupac Shakur's death in 1996, countless conspiracy theories have emerged claiming the legendary rapper is still alive. There have even been a few "sightings —" A.K.A. bad quality pictures of 2Pac imposters — that keep hope alive for fans who simply can't come to grips with the reality of the situation. On Sunday night, however, a seemingly living, breathing Pac took the stage at California's Coachella Valley Music Festival and performed "Hail Mary" and "2 of Amerikaz Most Wanted" in front of thousands. For five minutes, Pac was alive for all those in attendance. His hologram (I'm now told it was CGI, not an actual hologram, so tech nerds bear with me) was 100 percent lifelike, from the voice down to the tats. Makaveli greeted a stunned crowd with "What the f*** is up Coachella?" garnering cheers, and certainly some chills, from spectators.

2Pac, arguably the greatest rapper the world has ever seen, was brought back from the dead for a condensed set alongside fellow West Coast legend Snoop Dogg. The stunt received generally positive feedback, which begs the intriguing question: what if other dead artists were to get "hologrammed" as well? Whether this was a one-time event or a mere preview of what's to come, here are five musicians we'd want brought back to life for a final concert (or tour?). While Elvis Presley is the most obvious choice, he was, in fact, recreated in 2007 on an episode of American Idol.

Notorious B.I.G.
If there were a Mount Rushmore of rap, Pac and Biggie would be first to make the cut. So, naturally, the most logical artist to bring back after Pac would of course be his friend-turned-rival, Big. Their histories will forever be intertwined because of their similar ascensions to rap fame as well as their untimely deaths just six months apart. Don't forget, many people feel Biggie reigns supreme as the greatest MC dead or alive. Pac's East Coast counterpart wouldn't disappoint in concert if brought back to life.

Jimi Hendrix
Widely considered the greatest electric guitarist in history, no one could rock a show like Jimi. His short time in the spotlight was spent selling out concerts with his trademark 'fro and colorful outfits. Hendrix is yet another example of an immense talent whose life was cut short. He died in 1970, and as a result, no one under the age of 50 has had the opportunity to see Jimi in action. He would surely be a shoe-in for his own hologram if this becomes something of a trend. But was Hendrix the best entertainer ever? Our next artist would probably have something to say about that...

Michael Jackson
How cool would it be to see vintage, early '80s MJ moonwalk across the stage, performing classics like "Billie Jean" and "Beat it"? Say what you want about the man, but when he was in his prime no one could touch him. The King of Pop was an international sensation and one of the most recognizable faces in the world when he was at the top of the game. If holograms are here to stay, it's a sure bet we'll see those white gloves grab the mic again soon.

Bob Marley & the Wailers
The most revered reggae musician ever, Bob Marley is another easy choice to recreate in hologram form. The Jamaican singer was known for making music heavily influenced by the social issues in his country, and of course, for his famous dreadlocks. His posthumous album Legend (1984) went Platinum 10 times and sold 25 million copies worldwide. If an album released three years after his death was so popular, just imagine the crowds that a Marley hologram would draw 31 years after his death in 1981.

The Beatles
These four Englishmen were named the greatest artists of all-time by Rolling Stone and VH1. If you're a high school student who isn't a fan of '60s music, that accomplishment alone should at least gain your respect. To put it in perspective, imagine a phenomenon like Tebowmania or Linsanity spread over an ENTIRE DECADE. That was Beatlemania from 1960-1970. The group, led by John Lennon and Paul Mccartney, cranked out hits like Derek Jeter for 10 years before a fallout ended their reign. To borrow a line from the movie Austin Powers (another British superstar), women wanted to be with them, and men wanted to be them. Mccartney and drummer Ringo Starr are the only remaining Beatles, but with today's technology anything is possible. Needless to say, a reunion concert with them, alongside Lennon and guitarist George Harrison, would make a lot of people very happy.