Friday night's preseason game against the Green Bay Packers was meant to be former starting quarterback Colin Kaepernick's last chance to prove himself, and earn the starting roll in San Francisco. But now, Kaepernick is making headlines not for his accomplishments in the game, but for what he didn't do before the game.

Kaepernick is not the first athlete to face scrutiny for behavior during the playing of a national anthem. Just a few weeks ago during the Olympic games in Rio, American gymnast Gabby Douglas was criticized heavily for not placing her hand over her heart during the playing of the Star-Spangled Banner. It is clear that fans everywhere care deeply about treating the anthem with respect. Kaepernick chose not to participate in protest of the wrongdoings against African Americans and minorities in the United States.

"I am not going to stand up to show pride in a flag for a country that oppresses black people and people of color," Kaepernick told NFL media after the game, which San Francisco lost 21-10. "To me, this is bigger than football and it would be selfish on my part to look the other way. There are bodies in the street and people getting paid leave and getting away with murder."

The 49ers were quick to defend their former star. The organization released the following statement: "The national anthem is and always will be a special part of the pre-game ceremony. It is an opportunity to honor our country and reflect on the great liberties we are afforded as citizens. In respecting such American principles as freedom of religion and freedom of expression, we recognize the right of an individual to choose and participate, or not, in our celebration of the national anthem." 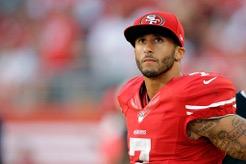 Photo: Quarterback Colin Kaepernick is under fire for not standing for the national anthem.

Photo: Quarterback Colin Kaepernick is under fire for not standing for the national anthem.

Other prominent athletes such as Dwayne Wade, LeBron James, Chris Paul, and Carmelo Anthony have also spoken out recently against the "senseless acts of violence" that are plaguing the country and the entire world, especially those perpetrated against African Americans. Kaepernick was aware of the potential scrutiny and backlash he could face from his actions, and has accepts the consequences.

"This is not something that I am going to run by anybody," he said. "I am not looking for approval. I have to stand up for people that are oppressed…If they take football or my endorsements from me, I know that I stood up for what is right."

Head Coach Chip Kelly said after the game that there has been no talk of the team punishing the 28-year-od quarterback in any way. With the season starting in two short weeks, Kaepernick is still hoping to beat out fellow quarterback Blaine Gabbert for the 49ers' starting gig.