Rapper's new soundtrack not quite up to par

It is nothing new for artists, especially rappers, to branch out into all sections of the entertainment industry. Entrepreneurs such as Russell Simmons, P-Diddy and Jay-Z have paved the way by starting their own clothing lines and entering other types of business. 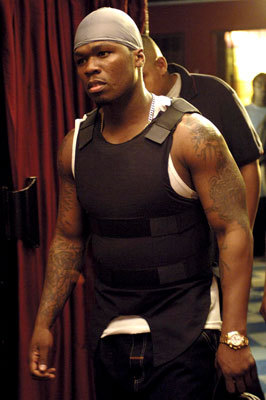 Photo: Rapper Curtis "50 Cent" Jackson stars in "Get Rich or Die Tryin'," featuring his his own music along with others.

Photo: Rapper Curtis "50 Cent" Jackson stars in "Get Rich or Die Tryin'," featuring his his own music along with others.

Most recently, rapper Eminem released his Shady clothing line and has even starred in a movie "8 mile" loosely based upon his own life. So it didn't seem that odd when rising rap star Curtis "50 cent" Jackson began his "vertical integration" just after he exploded onto the scene in 2002.

Jackson, who was recruited by Eminem and Dr. Dre and is now head of G-unit, released his "G-unit" clothing line and even purchased a vitamin water company. Now, in the mold of Eminem, Jackson has created a movie based on his life, "Get Rich or Die Tryin," and even has his own video game, "Bulletproof," coming out later this month. Though he seems to have mastered the business side of the industry in "Get Rich or Die Tryin," the film's soundtrack makes it seem as though he has lost most of his ability to rap.

"Get Rich or Die Trying," Jackson's second album under the same title, is not a solo production by any means, but rather a showcase of the G-Unit Empire. For the first time, Jackson showcases the new members of the clique. Spider Loc, Mase, Olivia, M.O.P. and Mobb Deep all pitch in to the soundtrack in an attempt to further G-Unit's success.

Jackson starts the album off strong with "Hustler's Ambition," a popular single and the movie's theme song. The mood is set with a funky old school rhythm which fades into an addictive thumping Jackson beat that is molded in the same flavor of B-Money's "Wangsta" and "In Da Club." The tone allows Jackson to illustrate the hustler's ascension from drug-dealing to riches. The song has a catchy hook and surprisingly articulates lyrics which use the setup punch line style favored by Lloyd Banks. Near the song's conclusion Jackson alludes to his hustling nature, rapping "I sold everything I'm hustler/ I know how to grind/ Step on grapes put in water and tell you its wine." Though a very beguiling song with seemingly innovative lyrics, "Hustler's Ambition" bears too much resemblance to Cassidy's "I'm a hustler" and Jay-Z's "U don't Know."

Jackson's other works on the album include insightful and brilliant tracks like "Talk About Me" and "When it Rains it Pours" and absolute trash like "We Both Think Alike" featuring Oliva. The song is most uncharacteristic of Jackson, with a "soft" back-and-fourth female and male dialogue that sounds like something Ja Rule might create.

The album's second track, "What If," provides a potentially great message of possibilities but is spoiled by Jackson's egotistical and demeaning lyrics. On the track, Jackson makes reference to Jay-Z, P-Diddy, Baby, Usher, Snoop dog, Ice Cube and even Halle Berry. It has a hot beat and addictive hook but substandard lyrics and message.

Lloyd Banks, another G-unit artist featured on the soundtrack, gives a performance that outshines both Jackson's and Young Buck's. Banks gives a thugged-out recital in "Born Alone, Die Alone" but then completely flops in "Get Low," an out of character song that sounds more like a love poem than rap.

Young Buck gives average performances in his one-verse appearances on many tracks and then shockingly provides one of the albums strongest all-around songs as a soloist in "Don't Need No Help." The song is an NWA style attack on the police and their inability to help anyone. The track is guided by a fast-pace musical baseline beat.

The first full crew song on the album is, "I Don't Know Officer." The track is a tribute to "street loyalty." G-Unit continues their history of igniting beef when new comer Murda Mase throws a couple of shots at Fabolous and Loon, rapping, "I don't know why Loon and Fabby won't just admit I'm their daddy."

Overall the "Get Rich or Die Tryin" soundtrack is an album full of hot beats and a couple of potentially great tracks. However, for every good track, there is another not worth the listeners' time. Unless you're a die-hard fan of Jackson, "Stay Rich" and do not buy this album.

Phillip Allen. Phillip Allen is a CAP junior who basically is a fascinating kid. Though he possesses little writing ability he was accepted to both the Communication Arts Program and now Silver Chips Online. He follows the Washington Redskins, Wizards and Nationals religiously. He plays soccer (for … More »