It was depressing enough that only two classes were responsible for 98 percent of the goods collected in the 2005 canned food drive, but something is definitely wrong when almost 90 percent of the 534 cans science teacher Eric Prange's third period AP Chemistry class collected were Ramen Cup Noodles that came from a sale at a local Giant store, based on their receipt from the store. 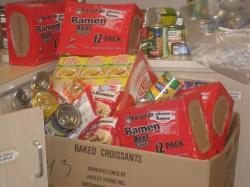 The canned food drive should provide the homeless in Blair's community with nutritious and easily prepared food and promote a spirit of generosity and good-will. But as the years have gone by, the canned food drive has become nothing more than a childish competition. On the Thursday before the end of the competition, Prange's class was still in the lead with their 534 "canned goods," closely followed by social studies teacher Marc Grossman's NSL Government class with 515 goods, according to the SGA's tallies.

Astoundingly, it was technology education teacher Tiffany Gregory's Foundation of Technology class that won the next day with a shocking 1,068 goods. "We were sick of the other classes that just had everybody pitch in money to buy food at stores like Costco," senior Noah Robinson said. "So on the last day Ms. Gregory just encouraged everybody to bring as much supplies and food as they could. We wanted to win real badly." While Gregory's class may have wanted to help the homeless at the end, the level of intensity in the competition has revealed a decline in true generosity at Blair. People seem to care less about feeding the homeless and are more concerned about winning a competition.

For the homeless, canned foods are much more than a game - their lives are at stake. The thousands of cans Blair donates to the homeless shelter serve well over 200 families, 60 of which include senior citizens, according to SGA sponsor Rondai Ravilious. Feeding them Cup Noodles is just as bad as giving them table salt. Based on its nutrition facts, each container of Ramen contains 1434 milligrams of sodium, accounting for about 60 percent of the recommended 2,400 per day. The United States Department of Agriculture (USDA) suggests limiting sodium intake because because sodium-high diets can lead to serious health problems such as high blood pressure, obesity and cardiovascular disease. Handing out cheap containers filled with dried, unhealthy noodles is not the best way to show the school's generosity.

And while the massive number of goods collected may be considered a success, the reason in which Blazers donate these goods certainly may not. The purpose of the breakfast party reward was to serve as an incentive so people would be willing to donate food, Ravilious said. Yet students should give for the sake of giving and not just for a simple prize.

Ironically, it was Prange's class that took the first step towards showing how Blazers should be behaving. On the last day of the competition, they gathered $110 to purchase canned food for the homeless shelter, according to senior Chris Silberholz. The SGA refused to count the goods for the competition since it would have already ended by the time they bought the food, but "still encouraged them to donate the food anyways as an act of charity," SGA treasurer Malcolm Foley said.

In fact, the students later purchased over 150 cans to donate to charity, and not a single one was Ramen, Silberholz said. "The second time around, the students realized that they were doing this for a good cause," Prange said. "They decided to buy things that they themselves would eat instead of doing it just for points." These actions were done entirely out of good-will, and worth commending.

The SGA has allowed these selfish competitions to go on for too long and must readily acknowledge the issue at hand. We should not need petty incentives such as a breakfast party to be charitable. The canned food drive should be less about the interests of students and more about the health and well-being of the homeless in our community. Blair as a school must work to regain its sense of charity and compassion for those less fortunate.