The school made a giant leap towards overcoming such labels at the end of Black History Month - February - through all-day panel discussions held last Friday in the auditorium. The discussions promoted candid conversation that should not stop with the end of the month, but continue on to create a more aware and informed student body and community. 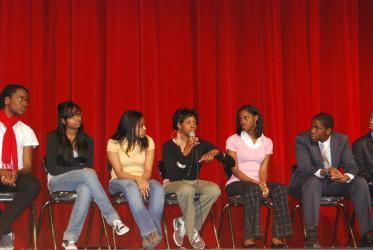 Photo: Students on the panel reflected on their experiences being called 'dorks' or 'oreos' for trying to 'act white.'

Photo: Students on the panel reflected on their experiences being called 'dorks' or 'oreos' for trying to 'act white.'

Traditionally, the school has acknowledged Black History Month with presentations on influential black leaders and athletes. This year, social studies teacher Maima Barclay organized panel discussions during periods two, four and six in which groups of more than ten Blazers, consisting mostly of black students, volunteered parts of their leap day to discuss racial issues in front of students and staff in the auditorium.

The students participating in the Black History Month assemblies voiced personal experiences with racial stereotypes that seem archaic but unfortunately still exist. Senior Malcolm Foley, a black student in the magnet, talked about feeling looked down on in upper-level classes. His testimony, along with many others from other panelists, challenged the state of our school and reflected the need for frank discussion on this lingering, ever-present tension.

Students who participated in the discussion believed that it was a forum for honesty and openness. "I think the panel was an excellent idea overall," SGA Director of Race Relations junior Novian Haynes said. Some observers disagreed, like junior Andrew Brown, who said that the panel "brought up problems we already know but nothing is being done and if it were to change, the individuals need to do it for themselves." Whether the actual change itself is more of an individual or shared effort, communication is necessary to make the initial connection between the problem and the solution. 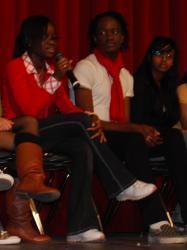 As Brown said, the next step after exposing issues is acting to resolve them. The administration and the SGA have a duty to not only provide chances for students to speak with each other openly, but also to nudge them in the right direction towards change. If such attempts fail, the school needs to collectively continue pursuing solutions that work.

For the past two years, the SGA has encouraged Blazers to branch out by sitting in different locations during lunch on Mix-it-Up Day, an idea that did not really work because it was poorly publicized, according to SGA Vice President Amina Goheer. And according to Goheer, the administration required Blazers to wear colored identification cards last year to create unity within academies, a decision that ended in segregation by academy. These initiatives show that there is a desire to bring Blair's diverse community together, but this desire needs to be backed by thoughtful, effective policies and enthusiasm from students.

Assistant Principal James Short believes that stereotypes are personal beliefs and that not much can be done administratively to solve some of the issues that still occur. He asserts that student interest drives change. "Students themselves can fix that; I don't think adults can do that," Short said. "Some things kids are going to have to navigate themselves."

But student initiative alone cannot solve the problem in such a diverse school – 30.8 percent black, 16.5 percent Asian, 26.4 percent Hispanic and 26.1 percent white, according to the Montgomery County Public Schools School-odex for the 2006-2007 school year. Instead, the Blair community should confront the issue by allowing students and staff to speak about racial discrimination and ways to resolve it. Unfortunately, attempts to encourage diversity and tolerance only come when they are tied to special events like Black History Month. If we truly want to fight and overcome prejudice, we must give the issue regular attention.