A chronicle of cheer

Blair's four male cheerleaders have come to be sideline sensations

It's Friday night at Blazer Stadium and Blair fans are going crazy. One group of friends is clapping, shrieking and jumping up and down, causing the gleaming metal bleachers to shake. Other fans are pointing towards the field with wide smiles plastered on their faces. But the excitement isn't because of the football team - these fans are cheering for Jonathan Gillette, Ario Sumitro, Nathan Ipanag and Anthony Jankowski, Blair's male cheerleaders. The crowd yells encouragement as the boys twist their feet, tuck their arms and fly through the air again and again. 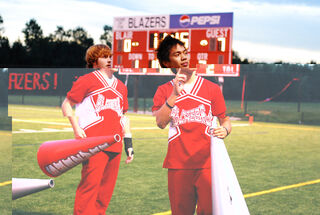 Photo: Jon Gillete and Nathan Ipanag add to the cheerleaders' sound with megaphones.

Photo: Jon Gillete and Nathan Ipanag add to the cheerleaders' sound with megaphones.

The four boys, always wearing their uniforms and often holding huge red or silver megaphones during performances, have become an integral part of the cheerleading squad. But it was less than two years ago that Gillette, now a senior, was the only male cheerleader on the field. Though Gillette joined the squad because of the team's need for a male cheerleader, Sumitro, Ipanag and Jankowski all joined because of their involvement in Blair's break dancing club, The B-boys.

Blair's first break dancing club took shape in the 2003-2004 school year, before "The B-boys" officially existed. Greg Donaldson, Blair alumnus and now a senior at the University of Maryland, was a sophomore when a "loosely organized" group of people formed the official break dancing club, he says. "It wasn't so much a school club as it was just a group of people who shared a passion for dance," Donaldson adds. "There was some controversy about our 'pseudo-club' when the administration started to crack down on us." The kids responded to administrative complaints that they were breaking rules by staying after school unsupervised by securing teacher sponsors and practice space around Blair. "Mainly we just wanted a place to dance and not be bothered," he explains. 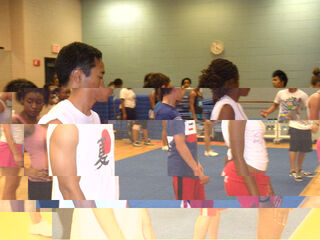 Photo: Ario Sumitro, Anthony Jankowski and Nathan Ipanag, from left to right, line up to practice a cheer.

Photo: Ario Sumitro, Anthony Jankowski and Nathan Ipanag, from left to right, line up to practice a cheer.

It was in 2007, three years after the break dancing club became organized, when Sumitro and Ipanag began dancing after imitating acrobatic stunts they had seen on the Internet. "I watched a lot of Kung-fu movies, [and once I] started flipping, the rest was easy," Ipanag says . College squads were also a source of inspiration for the cousins, according to Sumitro. "We'd watch videos of college teams, they'd do the craziest things. They'd like jump off of each other and flip, then land and start dancing," he says admiringly. "At that point we were just amazed. That's what we try to do now, wow the crowd."

Upon discovering other break-dancers at school, both boys joined Blair's break dancing club. Jankowski, whose interest in dance was also sparked by the Internet, joined the club one year after the cousins did, during his freshman year. It was dancing with the B-boys that lead Sumitro, Ipanag and Jankowski to cheerleading.

Transition to the team

Unlike the other three male cheerleaders, Gillette's interest in cheer didn't come from the break dancing club. Gillette started cheering at Blair his freshman year, when the squad had an open spot. "After my brother graduated, they lost their male cheerleader," Gillette says. "He taught me the basics." Gillette has been cheering with Blair ever since. It was the end of Gillette's first season on the team when Sumitro, now a senior, and Ipanag, a junior, joined him. One year later, Jankowski, now a sophomore, joined the squad as well.

Sumitro, Ipanag and Jankowski all joined the cheer squad to refine tricks ¨C from simple flips to more complicated twists, according to Ipanag - that they had worked on with the B-boys. "Nathan, Ario and Anthony came to us to improve their tumbling skills," cheer coach Roxanne Fus says. The boys were not only looking for self-improvement, but they also wanted to showcase their talent.

"I wanted to show off around school," Sumitro says. "I wanted to improve myself," Ipanag adds casually. As Jankowski, the smallest and youngest cheerleader, explains his reason for joining the team, Ipanag cuts in, rolls his eyes dramatically and jests, "Oh please, you did it because you wanted to be cool like me."

Regardless of their reasons for joining, Blair's team benefits from having four male cheerleaders. "The boys really heighten our sound, they put us on a higher level, equal to a college squad," Fus says. "We all appreciate the stuff we can do with them and how they help out, it's just nice having both sexes on the team."

The boys' knack for entertainment was the first thing the female cheerleaders noticed. "When they first joined, I thought they were hilarious!" junior cheerleader Jasmine Brantley gushes. The boys still serve as the team's comic relief - at one of the cheer practices before the Fall pep rally, Sumitro jumps into a handstand, only to land sprawled on a mat, staring up at his teammates, an embarrassed grin on his face. "Ari-oh!" the girls squeal as they stretch Sumitro's name out in singsong voices and a playfully mocking tone. By now, the boys "are a part of the whole," Fus says. Ipanag says that he has developed a strong relationship with the whole squad. "We've sort of established a big family," he says.

The next chapter in cheer

Sumitro and Gillette are in the midst of their last season with the Blair squad, and both want to cheer in college. "Right now I'm looking for a scholarship," Sumitro says, explaining the difficulty of finding the right college. Gillette adds, "A lot of schools have two different squads, but it's hard to find one that has a co-ed team for both competition and sports games."

As far as college goes, the future is less clear for Ipanag and Jankowski. Just as passion created Blair's first official break dancing club back in 2003, it was love of dance that drove the boys to start cheering. Ipanag and Jankowski are unsure of their future cheer careers, but both promise to keep "doing acrobatics," as Ipanag puts it. "I'll probably just do [cheerleading] in high school," Jankowski adds. "But of course I'll keep flipping," he says, a wide grin spreading across his face. "I'll be doing that 'til I die."