A conference to remember

The lights dim and a fast, catchy beat slowly seeps out from the speakers, making the audience tap their feet. Eight girls dressed in intricate red and blue costumes stand posed on the stage with their backs to the audience. Slowly, two by two, they turn around with their waving arms in the air and start dancing to the rhythm of an energetic bhangra tune.

These eight students were part of a group from Blair that played a role in the annual National Consortium for Specialized Secondary Schools of Mathematics, Science and Technology (NCSSSMST) student conference, hosted by Thomas Jefferson High School for Science and Technology (TJHSST) from Oct. 18 to Oct. 21. Blair not only sent seven students to attend the conference, as it has since before 2001 according to Magnet teacher John Templin, but also helped plan several aspects of the event over the past year. 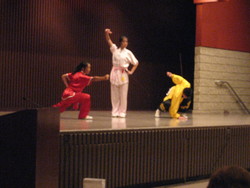 Photo: Seniors Tina Zhang and Wenbo Dou and junior Elaine Chung demonstrate the art of Wushu, a type of Chinese martial arts, during the International Talent Show at the conference.

Photo: Seniors Tina Zhang and Wenbo Dou and junior Elaine Chung demonstrate the art of Wushu, a type of Chinese martial arts, during the International Talent Show at the conference.

NCSSSMST was established in 1988 to provide United States high schools specializing in math, science and technology with a chance to exchange information and program ideas while bonding. The program hosts annual conferences in cities across the country, and previous locations include Salt Lake City, Atlanta, Detroit and New York City.

In honor of the year 2007, the theme of this year's conference in Virginia was Double-Oh Seven's "Yesterday never dies." Along with the rest of the 325 attendees from 34 different high schools, Blair participants listened to seminars on espionage, toured the Thomas Jefferson and George Mason University (GMU) campuses, explored the International Spy Museum in Washington D.C. and participated in a panel discussion on Capitol Hill. "The whole conference involved tours, free time and listening to people speak," junior Jonathon Gootenberg, a conference attendee, said.

Junior Ramita Dewan especially enjoyed the panel discussion. "All the talks were really persuasive," Dewan says. "The speakers used their different backgrounds to encourage us to work to stop global warming and to tell to our peers, friends and relatives that we can actually persuade our leaders to take an active role."

Some participants did feel that the presentations loaded students with too many facts. "They had a lot of information but a lot of times we were in the auditorium so it got really long," Dewan says. "If they had had more hands-on activities, it might have been a little more interesting."

Students ended the conference with a dance on the Potomac River aboard The Cherry Blossom. "I liked the social time," Gootenberg says. "The boat ride was neat and I got to do some dancing."

TJHSST also held the first student conference in 1988, but this year's event represents the first entirely student-planned and student-run event. Because the Blair Magnet is an affiliate school, Blair students were able to take part in the planning of the conference.

Last year, ten juniors went to the NCSSSMST conference in Salt Lake City. After they returned, they started coordinating with TJHSST to help plan the 2007 conference. "We ended up with ten or 11 things to do but we really only did about half of them. TJ ended up doing most of the work, which I thought was appropriate since TJ was the actual host," senior Jason Choi says.

Thomas Jefferson's senior David DyTang agrees with Choi. "It was really hard to communicate with Blair since we're pretty far away and most of the meetings were held during school, so Blair students didn't do as much as we had all hoped," DyTang says.

Although only seniors Julie Zhu, Esther Kim and Boris Vassilev were able to attend the conference, all ten of the seniors were involved in its organization. "It's a different experience," Choi says. "It's not everyday we get to organize a conference with another school, and this is a national conference. Even though TJ did most of the work, Blair still played its part."

But it's not the quantity that counts – it's the quality. Blair students provided acts for the International Talent Show, a workshop on material science and a photographer for the conference, 2007 alumnus Nick Wolf, now at New York University.

As the coordinator of last year's Magnet Arts Night (MAN), Zhu decided to ask two acts and three former emcees from MAN to perform at the event. Templin supplied the material for the workshop. "Mr. Templin had a binder full of material science stuff and we looked through and picked out labs that looked really cool," Choi says.

Colorful costumes, beats, music, dancing…the International Talent Show had it all. The show was held at GMU on Oct. 18, and students attending the conference enjoyed a total of eight acts, two of which were performed by Blair students.

Blair's bhangra act commenced the show. Eight magnet girls twirled, whirled and swirled on stage in their dazzling costumes. Weaving in and out, the dance was color-coordinated with bright blues pairing up with vivid reds. Then two seniors and a junior demonstrated Wushu, a type of Chinese martial arts. They amazed the audience with their agility, flexibility and skill with using a straight sword and a staff.

In between acts, Blair's emcees kept the audience amused with their own original script. Junior Jason Arora tried some pick up lines of the mathematically-minded persuasion like, "If I had to label you a function, I would say you're a sine wave 'cause you've got nice curves." "I'd say we did a good job making the crowd laugh," Arora says. "I don't know if they were expecting much in the beginning but we tried our best and I'm hoping they liked it."

Overall, the show was a success and received a lot of positive feedback. "I liked how they emphasized that the acts were multicultural and multiethnic," Kim says. "I'm really glad we included Blair in there because we provided variety to the show."

The next day, roughly 25 students attended the 70-minute workshop on material science, held on the school campus and presented by Kim, Vassilev and Zhu. The goal of the different labs and presentations was simple – to spark student interest in a different aspect of science. "Our goal was to get the students interested in material science and how it relates to everyday life," Kim says. "Students seemed interested and I hope they enjoyed it."

Possibly the most popular lab was the penny lab, in which students took pennies and heated them in a solution with zinc. The reactions between the zinc and the pennies allowed the pennies to change color. "I think the students liked Julie's penny lab the best," Kim says, "because they got to take all these nice, shiny golden pennies home."

Both students and teachers are proud of the part Blair played in helping run a conference with as much prestige as the NCSSSMST and were particularly happy with the wide attendance from students all over the country. "I was happy to see the Blair students taking on an active role," Templin says.