Christopher Guest is a man of many talents. He was the magic behind Nigel, the stupid death metal rocker in 1984's "This is Spinal Tap," most famous for upping the amplifier count from 10 to 11. He was the directing, writing and acting genius behind the hilarious mockumentaries "Best in Show," "Waiting for Guffman" and "A Mighty Wind," along with the stony-faced Eugene Levy, who has also been in most of Guest's pictures. He was even the six-fingered man in "The Princess Bride." In this business, everything he seems to touch turns to comic gold — but Guest's gift for farcical hijinks and poking fun at human eccentricities is lost in his latest venture, "For Your Consideration." 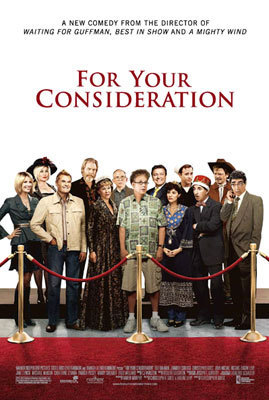 One thing which sets "For Your Consideration," apart from other Christopher Guest films is the movie's style. Unlike "Waiting for Guffman" or earlier Guest projects, "For Your Consideration" is written as a feature film, rather than a documentary. The movie profiles a struggling group of has-been actors as they attempt to stage a comeback as stars in an absurd Hollywood project, "Home for Purim." When someone in the cast gets whiff of Oscar buzz, all hell breaks loose as the characters' thirst for Oscar recognition overpowers their appreciation for the art and craft of theater. The characters are each unique and hilarious in their own way, and each perpetuates another aspect of the neurotic Hollywood actor stereotype. On paper, this melting pot of zany people alone would make for a hilarious hour and a half of movie time — but in reality, it doesn't quite add up.

The cast includes a series of old Guest stand-bys and new faces, and all of them are hilarious and capable in their roles. For instance, as Marilyn Hack, a high-strung Hollywood nutcase, Catherine O'Hara (easily recognizable as the mom from "Home Alone") is eccentric and amusing. Ricky Gervais (of the UK "The Office" fame) also delivers a hilarious performance as the corporate movie coach delegated to tell the "Home for Purim" writers to "tone down the Jewish bits" in the script. From the opening credits onward, the chemistry between the entire cast is palpable — and the fact that the actors are so clearly having fun in their scenes allows some of the more tedious bits to slide by unnoticed. At least at first.

But somewhere between the first twenty minutes of "For Your Consideration" and the ending credits, the stellar cast falls flat in the face of a tedious script. As the actors clamor for Oscar recognition, the movie starts to feel like a strung-together series of comedy sketches, lacking proper transitions. It also becomes evident that Guest hasn't changed his humor style at all over the course of his recent productions, and old fans will get easily bored of the predictable gags. Even the characters, in all their hilarity, are a little too familiar to the trained eye of the Guest fan. For instance, as Whitney Taylor Brown, the spacey movie producer, Jennifer Coolidge plays almost the exact same character as she did for her role in "Best in Show." It's blunders like these that ultimately make the movie look sloppy and less careful than previous Guest films, and make the once zesty and original formula seem weak and plodding.

The real shame in "For Your Consideration" is the squandered opportunity — the actors were hilarious, the scenario was hilarious, but the execution managed to overshadow all of the movie's talent. As Jay Berman, a dweeby Hollywood director, Christopher Guest is hilarious and interesting — but he appears so rarely in the film that his character looses context completely by the end. The gags and jokes that looked hilarious from the objective eye in Guest's mockumentary style films look overused and strained in a feature film format, and the constant stream of one-liner banter scenes throw the plot for a loop. "For Your Consideration" would have worked a lot better as a mockumentary — the ending product feels like a group of friends just got together in someone's basement and whipped up a movie of inside jokes and stale pranks.

So if you're looking for a hilarious, laugh-your-face-off comedy to get the evening rollicking, by all means, turn to "Waiting for Guffman" or "This is Spinal Tap." As a team, Christopher Guest and his entourage are the Midas rulers of comedy. But please, don't even consider "For Your Consideration" unless you're a fan of the mediocre. Looks like someone's golden touch just might be wearing off.

"For Your Consideration" (86 minutes, E Street Cinema) is rated PG-13 for some language and brief sexual references.