Although far from perfect, insurance mandate should be declared constitutional

On April 2, President Barack Obama made a bold move while the U.S. Supreme Court analyzed the constitutionality of one of his laws: he took another shot at the high court.

After several days of heated debate over the Patient Protection and Affordable Care Act (PPACA), the President challenged the Supreme Court's authority to overturn the legislation. The challenge prompted much outrage as conservatives jumped on it in anger and liberals, such as Harvard Law Professor and former mentor of the President Laurence Tribe, cringed at the statement. In an interview with the Washington Post, Tribe said, "Even if such comments won't affect the justices a bit, they can contribute to an atmosphere of public cynicism that I know this president laments." Last Thursday, the Obama Administration rescinded the President's comments, saying "the power of the courts to review the constitutionality of legislation is beyond dispute."The President's zealous remarks, however, emphasize the importance of the Supreme Court's decision regarding Obamacare. Ruling in favor of the PPACA's constitutionality will result in a national health care system that gives the central government unprecedented power. This is enumerated in the controversial insurance mandate. This power includes the ability to tax individuals who do not purchase health insurance despite being financially able, meaning Congress could make buying health insurance a federal requirement.

However, the debate extends beyond health care. Overturning the Act, or any part of it, could potentially further limit Congress's power under the Commerce Clause. "If the court says Congress went too far, it would be a huge symbolic victory for the principle that Congress has limited enumerated powers," Georgetown Law Professor Randy Barnett said in an interview with Politico. The battle, therefore, is the age-old "limited vs. expanded" role of national government. 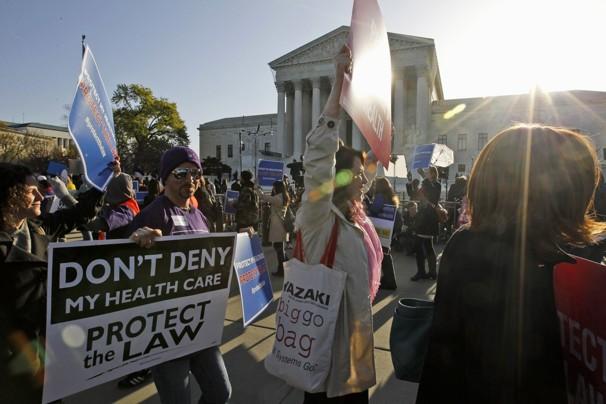 Photo: People rally outside of the Supreme Court, holding signs to show their favor of the PPACA.

Photo: People rally outside of the Supreme Court, holding signs to show their favor of the PPACA. Photo courtesy of The Washington Post.

Despite the partisan lines drawn in the sand, it should be noted that the heart of this debate is not whether the Act is effective or whether people like the insurance clause, but rather whether the Act itself is constitutional. Although the PPACA, including the insurance mandate, is far from perfect (it notably has stirred other controversies), it breaches neither the Commerce Clause of the Constitution nor infringes on our civil liberties. Some opponents argue that the insurance mandate violates civil liberties. But the requirement to buy into a system does not differ much from many existing programs that people accept without question. Take Social Security, for example. For federal tax purposes, most Americans have a Social Security Number and pay a Social Security tax. The same applies to other things people are required to pay for, such as driver's licenses, taxes and Medicare. Under this argument, these programs "infringe" on liberties as well, are "unconstitutional" and should be optional as well, right?

In fact, there are no barriers in the Constitution against such a mandate. After all, there is the Commerce Clause, which allows Congress to "lay and collect taxes…to regulate Commerce with foreign Nations, and among several States," as long as they have a rational basis. According to the New York Times, "Congress has estimated that health care services and insurance account for 17 percent of the gross domestic product and amount to more than $2 trillion annually." Since many hospitals and health insurers operate on a national market, these two trillion dollars reveal that the health care market has a significant impact on interstate commerce.

Furthermore, the Supreme Court has even supported Congress's powers in the Commerce Clause through recent decisions, such as Gonzales v. Raich (2005). In the case, the Supreme Court ruled that Congress can ban the production of home-grown marijuana, even in states where it is approved for medicinal purposes. As a result, the Commerce Clause even covers local matters that affect interstate commerce.

This does not mean, however, that any local matter is appropriate grounds for creating a mandate. U.S. v. Lopez (1995) actually limited Congress's power under the Commerce Clause because the situation did not specifically affect the nation's economy on a larger scale. But since the health care market has a significant impact on interstate commerce, a health insurance mandate falls well within the boundaries of the Clause.Some, however, will argue that if the Clause is interpreted in this manner, there will be no limitations to what the government can require people to purchase. Supreme Court Justice Antonin Scalia has said, "Everyone has to buy food sooner or later, so you define the market as food. Therefore, everybody is in the market. Therefore, you can make people buy broccoli."

A decision to opt out of buying broccoli, though, is not the same as purchasing health care. The former does not prevent others from receiving quality and affordability; the latter does. Health insurance without government regulation has no way of preventing people from "gaming the system." People can hypothetically spend a majority of their lives without health insurance coverage. When they need insurance, they can – hyperbolically speaking – purchase it on the way to the hospital or doctor's office. For a small percentage of people in the U.S. who can afford health insurance, but opt out, this is a reality.

But gaming the system results in negative consequences. When insurance companies receive less money, they tend to raise the premiums to increase profits. The huge downside to this, other than lighter wallets, is that companies increase costs so much that they put even the most basic and affordable health care plans out of reach for about 50 million Americans, according to the Census Bureau's 2010 Census.

That is not to say, however, that upholding the PPACA will help create a perfect world. In fact, Justice Scalia's metaphor raises a valid warning that a favorable decision for the Act will increase the scope of Congress under the Commerce Clause, which could potentially be dangerous. But in the case that the Supreme Court strikes the mandate, the PPACA can still work – if an alternative method of preventing people from gaming the system is used.

However, unless a stronger case can be made for the infringement of civil liberties, it is likely at least a portion of Obamacare will remain intact. From there, it is a matter of improving it.