A crumbling "Kingdom of Heaven"

"Kingdom of Heaven" combines many different aspects of classic epics. Borrowed are battle scenes, characters and plots from both "Lord of the Rings" and "Gladiator." While they worked well in their respective films, these mismatched elements together create a very sorry epic.

"Kingdom of Heaven," set during the twelfth century in one of the earlier crusades, tells the story of Balian (Orlando Bloom), a blacksmith who becomes a knight when his long lost father returns from Jerusalem. He joins his father Godfrey (Liam Neeson) in a quest to bring peace and justice to the Holy Land. 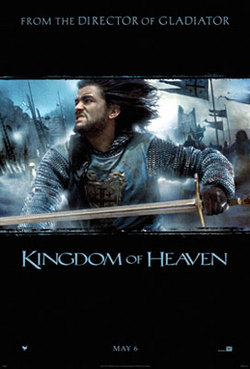 Therein lies the problem. Director Ridely Scott tries hard to find a balance between Christian and Islamic ideology-too hard. While it's commendable he doesn't stoop to glorifying the crusades, he also bends over backwards to achieve a sense of political correctness that didn't exist at the time. Most crusaders were not concerned with the feelings of their enemies; after all, both the Muslims and the Christians felt they had exclusive rights to the Holy Land.

However, in Scott's world, everyone just wants to get along. Of course, there are the requisite bad guys whose goal in life is to rain destruction on everyone, but they are few and far between. That's a good thing, considering the overacting of these few antagonists. They growl and sneer and order senseless slaughtering. Veteran actor Brendan Gleeson, who plays a corrupt knight, is even reduced to sporting a beard that is matted with blood the entire movie. The obvious symbolism is almost sickening.

The bad guys aren't the only ones who are shortchanged. Neeson, Jeremy Irons and Edward Norton are all pushed to the background to make way for Bloom. Neeson is only in the movie long enough to officially change his role from "cameo" to "supporting actor." Norton is completely unrecognizable as King Baldwin of Jerusalem; playing a leper, he wears a silver mask the entire movie which makes it hard for him to emote. It's too bad, considering he's one of the best characters in the film. He struggles to keep the peace and to reign in some of the wayward knights in his realm. Irons, as the noble knight Tiberias, has a few good scenes condemning traitors to knighthood like Gleeson and Marton Csokas, but runs off later in the movie to leave all the saving to Bloom.

"Kingdom of Heaven" confirms the worst about Bloom: he's not much of an actor. Before, he's played an admirable second-fiddle to heavyweights like Johnny Depp, Viggo Mortensen and Eric Bana. Now, as he takes on his first leading role, we learn why he's usually a supporting cast member. His war speeches lack the fervor of similar heroes, and he's not believable as the leader of a battle. Bloom should go back to playing the reflective background characters that made him a star.

"Kingdom of Heaven" isn't much of an epic. It does offer a quick shot of action and eye candy, but it leaves the audience feeling empty.

"Kingdom of Heaven" (145 minutes) is rated R for strong violence and epic warfare.