Rarely does a show come along that can bridge not just age gaps, but also social, ethnic and gender differences too. It can be challenging, tiring and potentially offensive, but, if done right, the show can be inspiring and progressive. "The Black Donnellys," written by Paul Haggis of "Crash" fame, falls into the latter category with its universal themes, powerful script and breakthrough cast.

Narrated from prison by Joey Ice Cream (Keith Nobbs), a childhood friend of the four Donnelly brothers, the convict recounts the events leading up to Tommy Donnelly (Jonathon Tucker) assuming the role of protector in New York's Hell's Kitchen. Straightedge Tommy is drawn into organized crime when his brother Jimmy (Tom Guiry) botches a hostage situation and his younger brother Sean (Michael Stahl-David) is hospitalized. 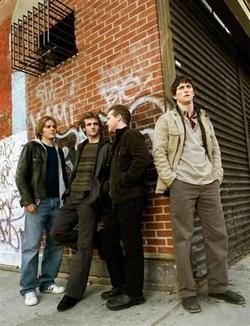 Photo: The four brothers in the "Black Donnellys." From comment.com

Photo: The four brothers in the "Black Donnellys." From comment.com

The overwhelmingly young cast of "The Black Donnellys" proves its versatility as actors through powerful character portrayal. Only when older actors like the detective Collero (Allan Steele) are introduced does the young cast appear to flounder, turning to action rather than dialogue to further the story.

The film is reminiscent of 2004's "Crash" with its variety of effective and powerful music choices. Snow Patrol's "Open Your Eyes" plays during the climatic final five minutes, contrasting greatly to Jet's Jet "Are You Gonna Be My Girl." Each song heightens already present feelings on screen, especially the use of traditional Irish music, like The Mad Maggies' "Sleepy Maggie" that kicks in during a bar fight.

Irish stereotypes (from the violent drunk to the overly chatty bartender) are ever-present in the film, but an early acknowledgment gives these clichés an ironic and honest feel. Even the title, an alteration of the term "black Irish" used to refer to Irish features, embodies stereotypes to strengthen the show's atmosphere.

Despite the powerful and intense themes of racial prejudices and discrimination, the show has ideas drawn from other sources. "The Black Donnellys" resembles 2005's "Four Brothers," starring Mark Wahlberg and Tyrese Gibson, with its complex family dynamics and sibling determined to save the family at all cost. In lesser ways, the portrayal of familiar love mirrors 1999's "Boondock Saints," through relationships as well as mafia ties.

Even viewers who don't share the characters' ethnic background or race will be able to connect on some level with "The Black Donnellys." Previews contained a tagline stating "family above all" and Haggis embodies this ideal in all aspects of the show. Anyone who has siblings, or even especially close friends, will be able to understand the brothers' feelings, actions and sacrifices for one other.

In the past, NBC has rarely allowed shows to develop and gather a fan base; "The Black Donnellys" replaced "Studio 60 on the Sunset Strip," which was cut from the NBC lineup mid-season. But if the network gives "The Black Donnellys" a little time and a chance, the show could become a hit among teenagers and adults alike.

"The Black Donnellys" airs Mondays at 10 PM on NBC. It is rated TV-14 for violent images.