A “Desperados” attempt at love

With COVID-19 forcing people to stay home, the Netflix original “Desperados” brings adventure back into their lives 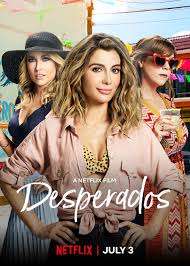 Photo: “Desperados” teaches the importance of friendship in a person's life (courtesy of Netflix)

Photo: “Desperados” teaches the importance of friendship in a person's life (courtesy of Netflix)

Directed by L.P., “Desperados (2020)” follows the story of 30-year-old Wesley (Nasim Pedrad), a woman who is saddened by the fact that she cannot get a job and still has not found the love of her life. After a blind date with Sean (Lamorne Morris) goes wrong, Wesley trips on a crack in the sidewalk and wakes up to a handsome guy named Jared (Robbie Amell) offering her help. Desperate to find love, Wesley pretends to be someone else to get Jared to like her.

Unfortunately, Wesley can’t keep up her act after Jared doesn't contact her for five days. Thinking that she is being ghosted, Wesley and her friends write a harsh email only to find out that Jared was in an accident in Mexico and has been in a coma for the past five days.

With the help of her two best friends, Brooke (Anna Camp) and Kaylie (Sarah Burns), Wesley goes to monumental lengths to make sure Jared doesn’t see that email.

The film does a great job of developing relationships between the protagonists. The three best friends all have good on-screen chemistry and the director also went in the right direction by choosing actors fluent in Spanish to play the hotel employees.

Typically, viewers favor movies with a simple plot that introduces a set of characters and provides an obstacle more than those movies that have too much going on, but “Desperados” proves otherwise. When the characters overcome a conflict and their goal is close in their sights, multiple additional conflicts arise.

Film writer Ellen Rapport throws so much at the main characters that some moments might make viewers want to stop just to take a deep breath and take in what just happened. With electricity lines falling on cars, child molestation accusations, trouble with police, electrocutions, dolphin attacks, goats nearly being run over, car flips, hikes random road and then going to a stranger’s quinceanera, this movie was truly one adventure that shows how much life there is yet to live.

Despite the complicated plot, the theme is easily identifiable. Throughout the movie, we see the main character Wesley gain a newfound confidence in herself, which demonstrates to viewers that we don’t need to change who we are for other people to like us.

Wesley’s persistence even after being thrown in Mexican jail has an amazing underlying message: stay dedicated to your goal, even if it is following a hot guy to a different country to commit burglary.

One downside of this movie is its lack of originality. This movie is very similar to other Hollywood hits such as “Girls Trip” and “Bridesmaid.” Like “Girls Trip,” this film shows best friends going on trips involving cheating husbands, divorce and assault. Like “Bridesmaids,”this movie shows a 30-year-old woman feeling like she is falling behind as her friends go on with their lives.

The similarities “Desperados” shares with other films doesn’t detract from the fact that not a second of this movie is boring.

From adventure to more adventure, “Desperados” teaches the importance of friendship in a person's life. The film is a must watch if you’re looking for a great laugh in sad times.

“Desperados” is rated TV-MA and is available on Netflix.