What will one man endure to save the life of his significant other? The answer, according to "12 Rounds," is excessive explosions, the deaths of innocent bystanders and abuse from a criminal. But without the clever plot that makes a great action film (think "The Bourne" series), "12 Rounds" is merely a sequence of action needing special effects and camerawork to move it along. 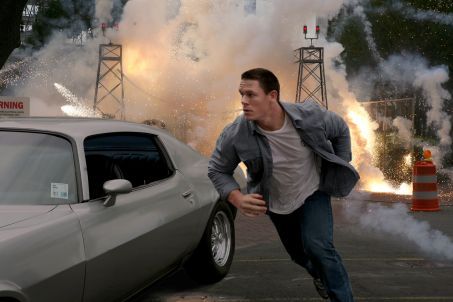 Photo: Explosions follow Danny Fisher (John Cena) in the "12 Rounds" he must pass to save his girlfriend's life. Picture courtesy of 20th Century Fox.

Photo: Explosions follow Danny Fisher (John Cena) in the "12 Rounds" he must pass to save his girlfriend's life. Picture courtesy of 20th Century Fox.

The film begins the night that FBI Detective Danny Fisher (John Cena) catches and arrests long-time FBI target Miles Jackson (Aidan Gillen) by cutting off the path of his car with a large boat. Although Miles surfaces alive, his girlfriend is killed by an oncoming car while attempting to escape. Motivated by grief and revenge, Miles kidnaps Danny's girlfriend, Molly (Ashley Scott), and launches a "game" of 12 cleverly planned tasks that Danny must not only perform, but survive through. The end prize is his girlfriend's life. The impossibly complex tasks, unfeasible by real people, cause a headache of massive destruction fueled by shaky and fast-paced camerawork.

This cinematography appears creative at first, but becomes increasingly jarring as destruction continues throughout the movie. The rough camerawork turns "12 Rounds" into a mere clashing of action, indistinguishable from that of other action movies. Although the cinematography sometimes causes dizziness, it still effectively establishes the intensity of each action sequence. Quick switches in perspective from security cameras, to normal shots, to FBI cameras build up the unsettling feeling of edge and urgency relevant in almost every scene in the action-packed film. Like unsteady footage captured by a documentarian, the constantly shaky cinematography makes the intensity seem all the more real. Impressively orchestrated explosions and crashes also augment the credibility of the action.

Diminishing the movie's integrity is Danny's unreasonable ability to succeed in executing tasks that are inhumanly possible. When Miles gives Danny seven minutes go down several stories in a building and then cover 23 blocks of packed New Orleans streets, he succeeds with a few moments to spare for a conversation with his brother. Such a skewed perception of time weakens the movie's credibility and ruins the movie as the viewer comes to expect Danny's success.

Overall mediocre acting, save Cena's performance as Danny, also detracts from the film. Although there are few nuances of character for him to portray, Cena's resolute and focused facial expressions believably communicate his dedication to Molly throughout the 12 rounds. Other characters fumble to find meaning in the intermittent and arbitrary one-liners that are out of place in the chaotic action. Awkwardly placed sarcastic and humorous remarks - given no time to develop - fall flat in their attempt to relieve from the heavy action. In solemn moments, the apologies Danny's FBI colleagues give for deaths are delivered apathetically and seem staged. Fortunately, the constant explosions and shaky camerawork leave little time for these more minor characters.

Shining moments of emotion help reduce the effect of consistent, brutal devastation. Danny and Molly briefly share a loving moment as she proclaims her confidence in his ability to defeat Miles during one round. When Miles predicts that a plummeting elevator holding both Danny and another man will kill one of the men, Danny exhibits compassion by doing everything he can to attempt to help both of them survive. When the man can't manage to climb onto a windowsill to save himself, the viewer experiences sadness and shock as the man falls down the shaft, scared to death and screaming for his life.

Despite sporadic emotion and impressive special effects, "12 Rounds" lacks a developed plot to surpass the standard of most action films: criminal attempting to evade government authority. Although the concept of executing 12 rounds of dangerous tasks may be intriguing, the missions become stale as each one just becomes an excuse to portray unconnected scenarios of destruction and death. Gratuitous violence and explosions, although artfully created, in a typical race against time and authority sink the potentially interesting storyline. There's nothing remarkable about these "12 Rounds."