A "Green"-er side of life

Nerdfighters band together to create a better world

A bunch of teenagers enthusiastically following an author isn't anything new; it's happened before with the "Harry Potter" and "Twilight" series. But one fandom follows both the author's works and creates a community that embraces thinking and, above all, celebrating your inner nerd. Author John Green, along with his brother Hank, lead the newest group founded on literary enthusiasm: the Nerdfighters.

Photo: In one of their many videos, the Green brothers show off the Nerdfighter hand symbol.

Photo: In one of their many videos, the Green brothers show off the Nerdfighter hand symbol.

On Jan. 13, the brothers came to Bethesda for the first stop on their nation-wide tour. Fans from around the area, including many Blazers, got a chance to meet cult favorite author Green. While many teenagers are concerned with fitting in, the resident Blazer Nerdfighters are not. These Blazers aren't afraid to be different and to embrace their nerdy side by reading, having discussions or maybe just getting really excited about "Doctor Who."

The beginning of Nerdfightaria can be traced back to 2007, when two brothers, John, an award-winning novelist, and Hank Green, creator of the largest environmental technology blog, decided to start making video blogs (vlogs) to each other every other day as a way of staying in touch. After being featured on the Youtube homepage, they began attracting a following. Their vlogs range from applying peanut butter to their faces to discussing the issue of Internet censorship.

Being a Nerdfighter means joining a patchwork community with a common goal. "We're called the Nerdfighters, not because we fight nerds, but because we are nerds who fight to increase awesome and decrease worldsuck" junior Emma Bresnan says. "Being a Nerdfighter is all about being proud to be a little bit weird and embracing your inner nerd."

Joining the society can mean actively going to Nerdfighter gatherings, enthusiastically attending book signings or simply watching the Greens' videos. Many Blair Nerdfighters are part of the Facebook group "Nerdfighters of the Greater DC Area." Bresnan was invited to the group by a fellow Nerdfighter and now helps run the page. "At the time, the group was very new, but it has since grown to a size of over 600 members," Bresnan says. 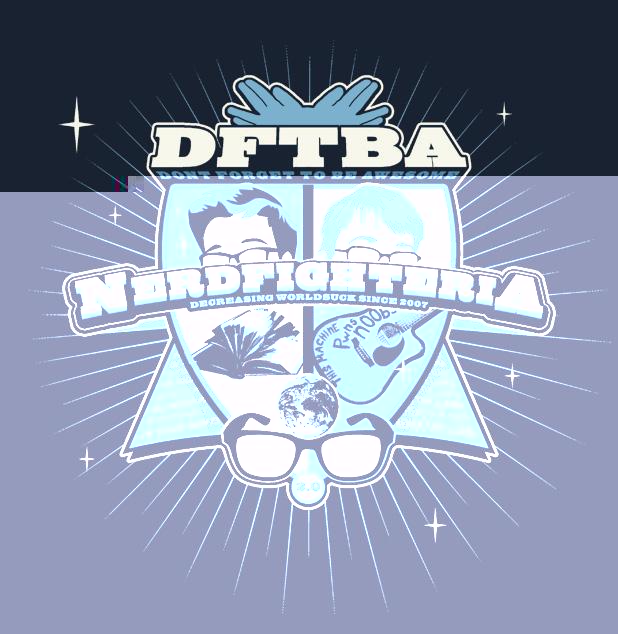 Photo: This is a fan made t-shirt design. The proceeds made from its sales will go to charity.

Photo: This is a fan made t-shirt design. The proceeds made from its sales will go to charity.

Through the Facebook group, Blair Nerdfighters can meet with other members from around the area and discuss topics that their other friends might not appreciate. "We've been having monthly gatherings where we all get together to nerd out and talk about the things we can't talk to real life friends about," Bresnan says. Their topics include everything from Green's books and videos to "Harry Potter."

Joining Nerdfighters has allowed freshman Ravyn Malatesta to make new friends and find common ground with strangers. "It has definitely helped me meet new people and make more friends," Malatesta says. "It also gives you something in common with people and even if you don't know each other that well you have something to talk about."

The community allows people to discuss a variety of topics and maintain the groups's motto "DFTBA" (Don't forget to be awesome). Nerdfighters strive to be good people and decrease all the bad in the world, according to Johnston. "John Green's books and the Nerdfighter maxim have made me realize that good must be done despite the crushing opposition of world-suck," Johnston says. The Green brothers frequently talk about being a supportive community and promote various charitable events in their videos.

Nerdfighting is not only about being a fan of Green and his books, but also embracing who you are and celebrating being unique. "I've learned the importance of imagining people complexly and trying to make the world a better place," Bresnan says.

Photo: The Green brothers started leading the Nerdfighters after their vlogs attracted a band of nerdy followers.

Photo: The Green brothers started leading the Nerdfighters after their vlogs attracted a band of nerdy followers.

For some Nerdfighters, reading Green's books and being part of the community has changed their lives. "Being a Nerdfighter has made me want to be a better person," Johnstone says. "And being one among the ranks of the Nerdfighter community, I feel that we are more than capable of making a change."

Some Nerdfighters, including Johnstone, even got to meet the Green brothers at the book signing. "I think he's an awesome guy and I think it would be an awesome experience to have a cup of coffee with him and talk about everything," Johnstone says. "As it is, I did not revel in the magic of being in the same building as him, which I can assure you, many people did. But I found the experience fun and interesting."

Bresnan was thrilled to meet the brothers and described the event as one of the best days of her life. "I didn't get to say everything I wanted to, but I don't know if I ever could," Bresnan says. "They're so incredibly talented, funny and intelligent."

From new members to those who have been there from the beginning, thousands of fans have joined the Nerdfighting community and embraced their nerdier sides. "Nerdfighters are some of the most eccentric, strange, uninhibited, and abstract people I have ever witnessed congregating on common ground," Johnstone says.

Who ever said that being a nerd was a bad thing?