A "gut feeling" on homeland security

Government department is a waste of the country's money

Recently, Secretary of Homeland Security Michael Chertoff said it was his "gut feeling" that the country faces a higher risk of terrorist attack in the summer, which raises the question: are we really safer with this government agency, which has one-fourth of its top leadership positions unfilled? Since it was established on Nov. 25, 2002, the Department of Homeland Security has been at constant odds with the mission it was supposed to accomplish and people it was designed to protect. 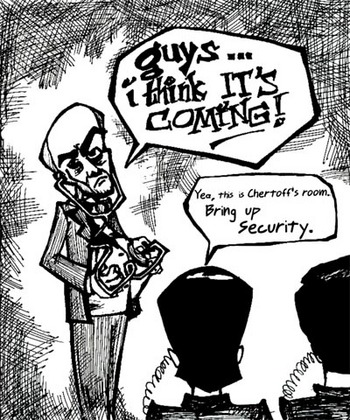 Just one year after its inception, in 2003, the Government Accountability Office found that the Department of Homeland Security (DHS) wasted two billion dollars from misusing credit cards, buying boats at double price (many of which are missing to this day), beer brewing kits and iPods used for "data storage."

Some say that a few bad apples don't ruin the bunch, but looking at the agencies of the DHS, it's not just bad fruit. For example, the Transportation Security Administration, or TSA as air travelers "affectionately" know it, put a 4-year-old boy, multiple deceased people and the wife of Senator Ted Stevens on the infamous "No-Fly" list.

Then, there was Katrina, one of the deadliest and the costliest Hurricane to hit landfall in the US. But rather than help the people and accept the help of the 90 countries that offered it (including Afghanistan, Iran and Cuba) the department of Homeland Security and the Federal Emergency Management Agency (FEMA) chose to argue over who had jurisdictional authority and let those in New Orleans and the areas of Mississippi to "sink or swim." In an odd twist of events Halliburton and Blackwater USA were awarded 150 million dollars in contracts by the DHS for their services during the disaster. The US government would rather pay people for help the government should provide, maybe we should have outsourced disaster relief and saved ourselves the misfortune.

Ironically, the only section of the DHS not criticized in the news was the National Disaster Medical System (NDMS), which is responsible for identifying the dead and taking care of the wounded. But even they were not able to operate as efficiently as possible after Katrina because of their superiors' bureaucratic meddling. Luckily for NDMS, they are now part of the Department of Health and Human Services. On the topic of their superiors, roughly 25 percent of the top leadership positions are vacant, which makes you wonder if they are really committed to the security of this country.

But given all the flaws and chinks in the armor of the DHS, why should the top leadership be filled? Considering that the DHS ranks lowest in job satisfaction among 36 federal agencies in a survey done by the Office of Personnel Management and several lucrative jobs wait for would-be leaders in the private sector, there's really no surprise. There have been three different directors of the Secret Service since they moved to the DHS four years ago. On average, directors have stayed ten years longer.

And now, the secretary of the DHS said that it was his "gut feeling" that a there was a greater chance of a terrorist attack in the summer time but it seems unlikely that an enemy so opposed to the values of the USA would care whether the weather was nice or not. But luckily for Chertoff, a National Counter-Terrorism Center Report was leaked the day after he made his feelings known, and in that report it hinted at the fact that Al-Qaeda pushed itself to pre-September 11th levels in terms of its capabilities, with most of its growth around the Pakistani- Afghan border. Last we checked, the USA was supposed to be in Afghanistan, making sure this didn't happen.

In fairness the DHS had a lot on its plate to begin with; border patrol, the secret service, emergency management, ensuring the security of millions of travelers and preparing for threats. But maybe because of this we should question why we even have such a department – because if we dissolved it into other government agencies, its tasks might even get accomplished.