Carell stars in trite comedy that he sadly cannot save

With two hit movies and an extremely popular TV show, Steve Carell has set quite a high standard for himself. For this reason alone, Carell's new comedy "Dan in Real Life," which otherwise would have earned average marks as a romantic comedy, has been downgraded to a downright disappointment.

Dan Burns (Steve Carell) is a successful advice columnist and a single parent dealing with three headstrong daughters. Although it has been a couple of years since the loss of his wife, Dan shows no inclination to move on. But during a weekend at his parents' Rhode Island home, Dan experiences a change in mindset when he meets Marie (Juliette Binoche) in a bookstore; it is, no doubt, love at first sight.

Moments after he returns home, Dan has the pleasure of meeting Marie again. Only this time, she is introduced as his half-witted brother Mitch's (Dane Cook) girlfriend, who will be staying over for the weekend. Still hung up on the intense attraction the two experienced over a cup of coffee and Emily Dickinson just days before, Dan and Marie nonetheless agree to forget about their fateful first meeting. 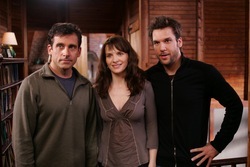 Photo: Mitch, blinded by his love for Marie, doesn't see the tension between her and Dan. Photo courtesy of Touchstone Pictures.

Photo: Mitch, blinded by his love for Marie, doesn't see the tension between her and Dan. Photo courtesy of Touchstone Pictures.


Marie soon hits it off with the rest of the family members as well, all of whom tell an ecstatic Mitch that she is "perfect." But as Mitch's affection for Marie deepens, so does Dan's bitterness toward the situation. Marie attempts to maintain composure but the she and Dan find themselves inexorably drawn to each other, despite attempts to suppress their attraction.

The only phrase to describe this move is "sickeningly cliched" The daughters are far too typical: enter the two haughty and temperamental teenage daughters and the smart-aleck 9-year-old. The whole family atmosphere is clichéd: enter numerous forced and contrived sequences of family touch football, family charades, family talent show, family morning workout, family crossword competition; the list goes on.

Dane Cook portrays the clichéd character of Mitch, the oblivious brother about to get his woman stolen. Worst of all is the character of Marie as the gorgeous, funny, talented, intelligent, flawless, just plain perfect woman. The audience is quickly irritated by her unblemished persona, unable to find any realism or depth within her character.

Furthermore, the movie is filled with arbitary subplots that do not add any substance to the movie. Most of these scenes consist of the little cozy family moments that do not provide any real insight other than the blatant observation that Dan's family spends way too much time together.

One scene portrays Dan, in an attempt to overcome his feelings about Marie, and a childhood friend Ruthie Draper (Emily Blunt), the classic ugly-ducking turned beautiful-swan, on a double date with Mitch and Marie. The screenwriter could have provided a more interesting twist surrounding this character but it appears as though Ruthie's sole purpose is to make Marie jealous and aware of her lingering feelings for Dan – as if she did not know already.

Undeniably, Carell is the best part of this movie. His exaggerated facial features at the right moments, his meek yet volatile persona and his ability to pull off juvenile behavior hilariously pepper some parts of the film with truly comedic scenes. But fans of Carell will not be able to sit through an hour and a half of excruciating banality just for his scarce moments of glory. Stick to another viewing of "The 40 Year Old Virgin."

"Dan in Real Life" is rated PG-13 for sexual innuendo and is playing in area theaters.