A haven from a hostile world

Takoma Park's sanctuary status is an example for all

As the 2008 presidential campaign heats up, the candidates are scrambling to come up with positions that please voters. Immigration is a particularly thorny issue, and the candidates are struggling to prove that they are the right ones to deal with the situation. Just last month, Republican candidate Mitt Romney accused fellow candidate Rudolph Giuliani of making New York City a "sanctuary city," or a haven for undocumented workers, according to the Associated Press.

In face of this nationwide hostility toward aliens, the city of Takoma Park recently reaffirmed its own status as a sanctuary city to illegal immigrants – the kind of thing that more communities must do if anyone expects to stop the antagonistic feelings toward illegal immigrants from becoming national law. 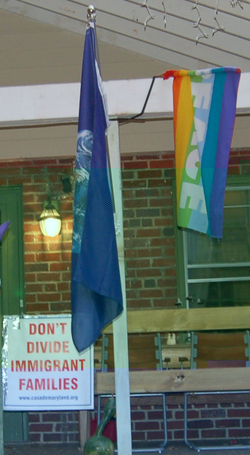 A sanctuary city has something that few other towns can possess – an uninhibited sense of diversity that grows with every day. A person's immigration status should not determine the basic rights to life that everyone living in America should possess. Regardless of how they arrived here, illegal immigrants are still productive members of the community, and until the national government decides how to deal with the situation, these immigrants should not be punished for participating in everyday activities.

In 1985, Takoma Park passed the City of Refuge Ordinance, which prevented officials from enforcing federal civil and criminal immigration laws. On Oct. 29, the Takoma Park council voted unanimously to reaffirm the town's "sanctuary city" status. Two weeks earlier, it rejected a request from the chief of police to execute immigration warrants for deported felons.

With such steps, Takoma Park is sending a clear message to the public, as well as to national political leaders, that "the City of Takoma Park believes that all persons should be treated equally, regardless of their citizenship or immigration status," as their City Council writes.

Legal and illegal immigrants are not differentiated in the city, and illegal aliens are allowed to use public facilities without fear of being reported to the Department of Homeland Security's Immigration and Customs Enforcement (ICE). Takoma Park's sanctuary status is something that can, and should, be replicated by other communities.

The most important aspect of the sanctuary city status is the immigrant community's trust in local police. In Takoma Park, immigrants can report crimes without worrying that police might investigate their immigration status. This trust between citizens and police is essential to a diverse, functioning community. As the Takoma Park City Council writes, their city is "comprised of racially and ethnically diverse individuals, both native born and immigrants, whose collective cultures, backgrounds, and viewpoints join to form a rich community which prides itself on welcoming persons and families of all backgrounds and nationalities."

The council's recent decision also extends into the private, psychological lives of illegal immigrants. They will be able to go in public without fear, and will be less reluctant to seek public services. "It will make their lives easier," says Larisa Caicedo, director of Nueva Vida ("New Life" in Spanish), an organization that assists Latina women, often immigrants, with breast and cervical cancer. "It is going to help them think they will be less persecuted. It will make them feel more comfortable by going out and getting services."

Caicedo has it right – by building up the trust between illegal immigrants and city employees and police officers, Takoma Park will become a safer, more diverse and all-around friendlier community. The relationship between immigrants, citizens, and city employees is the determining factor in having a healthy neighborhood. The sanctuary status extends an attitude into a law. With time, immigrants will feel as comfortable in Takoma Park as they would in their homes.

Takoma Park's sanctuary status also prohibits immigration status-based discrimination by city employees and police officers. However, the council did not specify what types of discrimination are unlawful. While physical abuse has not been an overt problem in Takoma Park, the council should be wary of possible economic and social prejudice against illegal immigrants.

The recent reaffirmation is an example for other towns, and for America as a whole. Immigrants come to America to find a better life for their children and begin their own lives anew. This fundamental American principle is rapidly dying out, but there is thankfully one place where it still resides: Takoma Park.