The main reason director Francis Lawrence's "Constantine," an adaptation of the comic book series "Hellblazer," gets away with casting Hollywood's Most Overrated, Keanu Reeves, as its leading man, is the simple fact that Reeves plays a character that would be completely believable as his real-life persona. Could we see Reeves…chain smoking? Making dry yet knife-edged remarks about mental patients? Acting mildly misogynistic? I think so. 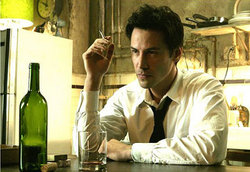 Photo: The brooding Keanu Reeves as John Constantine in "Constantine."

Photo: The brooding Keanu Reeves as John Constantine in "Constantine."

But another reason is that Lawrence fills his movie with plenty of pretty little dark distractions. "Constantine" has everything you'd expect to find in a movie about an antihero who battles demons and consorts with angels (well, half-breeds, in both cases); Reeves faces more than his fair share of darkness, fire and ugly while crusading for eternal salvation. See, John Constantine is one of those revival stories: depressed teen commits suicide, but is only dead until the paramedics arrive two minutes later. Problem: suicide is a mortal sin. As Reeves himself deadpans, two minutes in Hell is more than enough convincing. Thus we have Constantine's motivation for deporting demonic half-breeds: he figures if he evicts enough, God'll let him back into heaven. It's the role Reeves fills best, the one he has been typecast into: the smart-talking, cynical loner; the gun and gadget-slinging rebel who plays by his own rules.

"Constantine," therefore, is driven more by a tight plot than by the breadth and depth of its characters. Sure, there's the smart/pretty female tag-along, Angela (Rachel Weisz), who chips in the occasional emotion. There's the sly, grounded apprentice Chas (played serviceably by Shia LaBeouf). The gang's all here: the spiritual middleman, the gadget guy, the flawed best friend. As far as standouts go, we have the supernatural roles: Gabriel (the eerily androgynous Tilda Swinton), Satan (the elegant Peter Stormare), and Balthazar (Bush singer-turned-actor Gavin Rossdale), which range from merely surprising to superb.

But enough with that: the real meat of "Constantine" lies in its conflicts and situations. From the start, we are thrust head-first into the less-than-ordinary events of Constantine's everyday life, and writer Kevin Brodbin never really lets us up for air. "Constantine” flows the way a good comic reads: transitional shots and scenes are few and far between, like the fast-paced cells of the comic book world. As the movie and the plot progress, well before the viewer has been given sufficient time to connect the dots, these strands come together and form a cohesive knot. Suddenly, we're seeing shades of character development. We're watching the pieces of an elaborately crafted jigsaw puzzle click together, and the result is both engrossing and authentic.

The praises of "Constantine" aren't going to be sung from the rooftops of the same critics who are drooling all over "Sideways" and the like. It may not even be a particularly good film, as films go. The secret is that Lawrence, in his wisdom, has finally done the nigh-unthinkable: he's captured a comic book in moving, talking form. Lawrence traded overbearing flashiness and overused CGI effects for the "under the radar" approach, and while his cast and characters may end up slightly underwhelming for it, his touch has still managed to shape something satisfying.

"Constantine" is rated R for demonic images and violence. It is now playing everywhere.