A lesson in love

Once upon a time, Saint Valentine wrote a letter to his love while in jail, signing it "Your Valentine," a tradition that has evolved into the beloved Valentine's Day. While Saint Valentine's act of love may just be a legend, the Valentine's Day of today is characterized by all things romantic: couples, candies, roses and the occasional poem. Contributing to the festive spirit, Blair teachers recount their romantic proposal experiences, teaching that while there is no one proper way to propose, some basic steps are recommended. 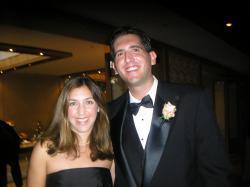 Step one to the perfect proposal is getting acquainted. English teacher Adam Clay was introduced to his fiancée Sarah Unger by his mother and aunt. At the time, all three women were working together in the Howard County Public Schools system. Physical education teacher Heather Nelson (formerly Heather Amell) met husband Diallo Nelson at a cross-country meet around four and a half years ago, where both were coaching.

But before Amell met her husband, she played matchmaker for close friend and ninth grade lead teacher Cindy Villavicencio. Amell introduced Villavicencio to her now-husband, ex-Milwaukee Brewers pitcher John Novinsky, Jr. When the two first met in Woodbridge, Va., the pair didn't seem compatible. "She blatantly blew him off," Amell says with a smile. But a week after the first meeting, Villavicencio and Novinsky met again in Washington, D.C. This time, Novinsky bought her a rose, and "that's when he got my attention," Villavicencio recalls.

Once two people establish a relationship and the idea of marriage looms in the future, the next crucial step is the ring. For each of the three teachers, a specific ring was carefully selected prior to the proposal. According to Amell, Nelson purchased the engagement ring the day he proposed. Before he went to the Macy's at Tyson's Corner with a "support" friend, Nelson did extensive research and ultimately decided on a round diamond set in white gold. 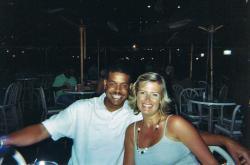 Photo: The Nelsons pose on a seven-day cruise to the Cayman Islands in spring 2005. Photo courtesy of Heather (Amell) Nelson.

Photo: The Nelsons pose on a seven-day cruise to the Cayman Islands in spring 2005. Photo courtesy of Heather (Amell) Nelson.

The story of Clay's ring began even farther away, in New York. His sister-in-law's uncle is a jeweler in New York City, and he made an engagement ring for Clay's brother earlier that year. Before ordering a ring from his in-law, Clay and his mother went to Columbia Mall to look at styles. "To be completely honest, I didn't know anything about rings at all," Clay admits with a sheepish grin. After he found a setting he liked — Tiffany's Lucinda, a round diamond set in platinum — he sent a request to New York City and received the ring three days later, a week before he proposed. "It was unbelievably quick," Clay says.

Novinsky, on the other hand, did his work independently. "He didn't want any help from any one," Villavicencio states matter-of-factly. After narrowing his selection to three rings, he finally settled on a "unique and different" rock, Villavicencio said. The ring, a round diamond set in white gold, has a low setting that closes around the diamond, a feature that Villavicencio loves.

With relationship and ring in hand, it's time for the entrée - popping the question.

Getting down on one knee

Villavicencio and Novinsky agreed to meet at a renowned chophouse on a Sunday night. Villavicencio expected a romantic dinner in celebration of her recent birthday, and she got one — Novinsky surprised her with a parade of gifts. He began with a card, which seemed both solemn and romantic. "As I read it, I felt like I was reading a marriage proposal, but got thrown off when he gave me my first gift," Villavicencio says. 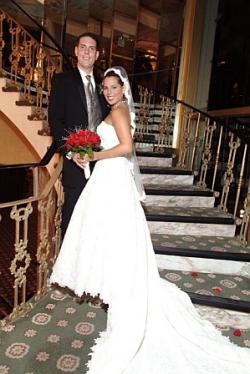 The first gift was an intricate dolphin figurine, which she originally wrote off as cheesy. Unimpressed, Villavicencio was eager to receive her second gift, a Build-a-Bear, which had become a tradition with the couple — one of Novinsky's first gifts to her had been a baseball bear.

This time, however, the bear was wearing a tuxedo and carrying roses. "May 23, 2004's teddy bear had a different look," she says. With her heart pounding, thoughts ran past her head; "Could this be a proposal?" Villavicencio remembers thinking. Novinsky motioned for her to press the button on the bear's paw. And while the bear echoed out Novinsky's pre-recorded message, "Cindy, will you marry me?" the baseball player got down on his knees and proposed alongside the bear, holding his final present — the ring. Her first reaction was shock. "My heart stopped; I was speechless — which is rare to see," she says. But she accepted and the couple wed on Oct. 22, 2005 in New York.

As opposed to the receiving end, the giving end of the proposal requires a bit more work, and Clay had been preparing for this moment for weeks. One afternoon, Unger promised to play a game of Scrabble, a mutual pastime. When the couple finally sat down to play, Clay slid his ring unnoticed into the bag of letters. One letter on the board, two letters, three letters…last letter, but no ring.

Unger did not notice the ring in her tile bag and remained focused throughout the game. Clay's nerves began to dissolve. "I was hoping she would pull it out the second time," Clay jokes with slight exasperation in his voice. 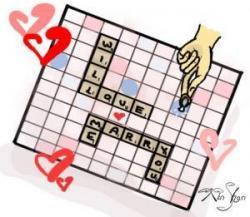 Photo: A game of Scrabble becomes a life-long commitment.

Photo: A game of Scrabble becomes a life-long commitment.

After she placed the last tile down and claimed absolute victory, Clay was shocked. "I'm pretty sure there's another tile in there," he said, eagerly waiting for her reaction. At first, she brushed him off as a sore loser, but Clay stubbornly claimed that she was missing the most important tile. Finally, Unger dug into her bag and pulled out the last game piece — the sparkling ring. Clay immediately proposed and, watching his girlfriend's speechless face, was thrilled to hear her say "yes."

Power-walking down the aisle

For Amell, a common hobby also turned into great proposal material. During the summer , Amell and Nelson took some routine laps around a lake in Laurel — they would jog, then walk, then jog, then walk — but as Amell began to start jogging again, Nelson pulled her back and turned her around.

At this point in their exercise both were fairly worn out, but suddenly, Nelson got down on one knee and proposed. "I thought he was joking," Amell recalls. While a little part of her ("I would say 10 percent of me") was disappointed that she didn't have a "fairy-tale" proposal, Amell now fully appreciates his frankness.

She says that now when her husband does do sweet things, they become much more meaningful. Nelson's tendency to be more direct than "mushy mushy" is an added bonus, as it's rather compatible with Amell's views. "I'm not a romantic person. Now, I'd rather have him do the dishes," she laughs.

While Amell did not get a "fairy-tale" proposal, both she and the other teachers found happiness within their own special engagement. Clay, who is set to wed Unger this September, recommends a personal and private, surprise proposal. "I don't think it has to be elaborate," Clay says. "It's more fun if you don't tell anyone."