A life worth laughing about

Usually, those of us here at the Humor Section of the Silver Prophet are here for the funny bits. After all, we can't write about real news – all those pesky facts and details get in the way. We figure those poor blokes who actually have to cover all the latest accidents, crimes and exploding toilets have got the serious market covered (though really, we could do a story on exploding toilets… some other time, perhaps). Today, though, we decided that we needed to take a serious break to honor a monumental loss to the wizarding world's sense of humor: the death of Fred Weasley. 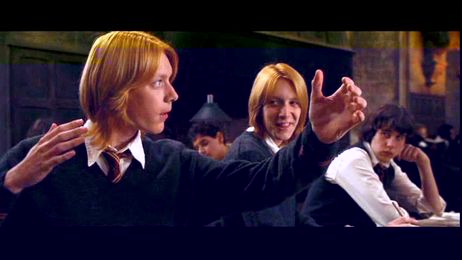 Photo: Fred could take almost anything with a laugh, from the terrifying prospect of asking a girl to a dance to our own Chosen One's occasional temper tantrums.

Photo: Fred could take almost anything with a laugh, from the terrifying prospect of asking a girl to a dance to our own Chosen One's occasional temper tantrums.

Those who knew him better could describe Fred's personality, his personal triumphs and his serious endeavors. This story is a tribute to this fact and this fact only: the man was funny. Born on April 1, he proved to be one of the best fools the wizarding community has ever seen. Fred could take almost anything with a laugh, from the terrifying prospect of asking a girl to a dance to our own Chosen One's occasional temper tantrums. Weasley's Wizard Wheezes' success is a testament to the vision, determination and ingenuity that Fred possessed (and George possesses, but that is a story for another quill). The loss of such potential at such a young age is devastating. But more than anything, Fred represents one of the most important qualities we possess: the ability to laugh in the face of death.

The root of humor is not lighthearted, and don't let anyone tell you differently. We laugh at pain. We laugh at awkwardness. We laugh at those pictures from our childhoods where we look like some heinous swamp thing belonging to neither gender. We laugh because the alternative is tears and despair. Fred could do that. He could turn a tense moment, even a tragic one, into a funny one. He fought evil physically, yes, but he also fought with U-No-Poo, with Potterwatch, with the ability to make people smile instead of give up. He knew that life was one big joke, and he knew that there were things worth fighting for, and he knew that those two things are far from mutually exclusive. Everything He-Who-Must-Not-Be-Named represented – terror, bigotry, coldness – can be destroyed by laughter, and Fred did that perhaps better than anyone.

For that reason and many others, Fred Weasley's presence isn't gone. Whenever a child makes their parents laugh instead of scold, whenever someone proves that not all intelligence is academic, whenever someone is grinning because there isn't a better alternative, Fred taps them on the shoulder. He will only be gone when none here are searching for the funny bits, no matter how grim things may seem. Anyone with a sense of humor owes him a great debt. Anyone without it, well, you just wasted about two minutes reading this. And, as a certain someone would say, time is Galleons, so we thank you for your contribution.