After 14 years, over 400 million copies, 4,100 pages, seven books, eight movies and millions of fans all over the world, the Harry Potter series has come to an end with its final film, "Harry Potter and the Deathly Hallows Part 2”. As hundreds of people lined up to see the midnight showing of the finale to this epic series, they began to look back on the series and its greatness. 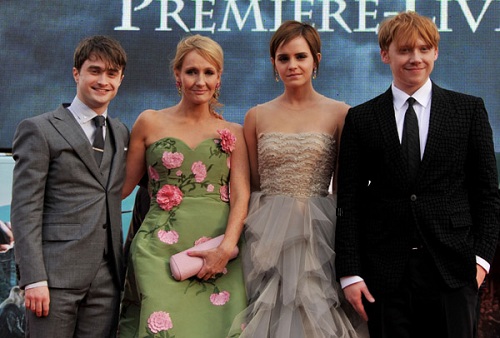 When the first book of the series, "Harry Potter and the Sorcerer's Stone," was published in 1997 no one - especially the 12 publishers that rejected J.K Rowling's manuscript - expected it to become one of the biggest book and movie franchises in history. After the record-breaking fourth book was released in 2000 and the first movie was released in 2001, all hell broke loose. From then on, the childhoods of millions of kids around the world were forever changed. An entire generation has grown up with Harry Potter and many people can't even recall a time when there was no Harry Potter.

Whether you're talking about the books or the movies, no one can deny magnitude of the effect that Harry Potter has had on Britain, America and dozens of other countries. Aside from the wild financial success of the series, the books encouraged children to read. As everyone knows, reading wasn't always on the top of childrens' and teenagers' activities lists. Rowling created such a detailed world unlike anything before it, drawing both kids and adults into the wizarding community.

If it had not been for genius mind of Rowling, no one would have detailed knowledge about such magical things as the difference between Monkshood and Wolfsbane (see "Sorcerer's Stone") or the difference between a werewolf and an animagus ("Prisoner of Azkaban"). Where would we be without Dumbledore's vast pool of wisdom? Or Fred and George's perfectly timed humor? What if no one knew the names of Daniel Radcliffe, Rupert Grint and Emma Watson?

Luckily, no one will ever have to know because Rowling was able to create Potter's world and its infinite wisdom. The world Rowling conjured up was, and still is, so enthralling that it will continue to affect people of all ages for years to come. The final book and movie may have been released but all the memories, lessons, experiences and knowledge gained from the Harry Potter series will forever be etched in the minds of its fans.