Last Tuesday when Haiti was torn apart by a calamitous 7.0 earthquake, charitable forces worldwide were quick to mobilize. Financial, political and social conflicts were immediately put aside to undertake a battle of a much greater magnitude – one simply of righteousness.

The earthquake struck on Jan. 12 at 4:53 p.m., its epicenter just outside of Haiti's capital, Port-au-Prince, leaving nearly all the buildings in ruins and about three million people in need of emergency help. The earthquake was the worst Haiti has seen in more than 200 years, and one of the worst recent natural disasters in the Western Hemisphere.

Photo: George Clooney was joined by other A-listers during a telethon to raise money for relief efforts in Haiti.

Photo: George Clooney was joined by other A-listers during a telethon to raise money for relief efforts in Haiti.

Around the world there has been a notable response from governments. Nearly $1 billion has been donated by 39 nations and opportunities to help are continually being created. The U.S. has thus far sent $130 million in aid, along with numerous medical personnel, relief helicopters and naval ships to help with rescue and evacuation. Just on Thursday the U.S. Senate voted to give faster tax breaks to citizens who donate to Haiti. To watch our nation's money go towards water and medical supplies rather than guns and grenades certainly brings a sense of integrity.

But more inspiring and fulfilling is to experience the large cultural movement to help Haiti. Pop culture icons have banded together to hold major events to raise money for the crisis, and awareness for the cause frequents the media. Single celebrities, such as George Clooney, Sandra Bullock, Gisele Bundchen – even the incognito Tiger Woods – have made remarkable contributions.

And once again, technology has proved to be revolutionary in enabling change. Donations via text message campaigns have been incredibly effective over the past week, allowing people to contribute to the cause within seconds. The American Red Cross has raised over $22 million of its funds from its "Text to Help" program, and many other organizations such as Wyclef Jean's Yele Foundation have employed similar strategies. Social networks like Twitter connect people to the crisis by providing constant news updates, photos and stories of both desperation and hope. 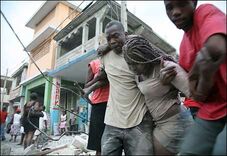 In Haiti, a nation of historical instability and turmoil, complete recovery will not likely be seen for many years to come. Previous to the earthquake, there were no construction standards in place in Haiti and an estimated 60% of the buildings in Port-au-Prince were shoddily built, according to The Washington Post. The effort to rebuild Haiti presents an opportunity to invest in sustainable development for the country, create a better infrastructure and eventually diminish the poverty that exists there.

While there is no way to reverse the thousands of deaths nor the abysmal grief with which it comes, we can put faith in our willingness to drop animosity, selfishness and petulant problems to bring light to a disaster. We need to realize that we all have the power to make progress in a situation in need of dire change.

If you would like to make a donation to help Haiti, please visit the links below.

UNICEF is deploying clean water and sanitation supplies, therapeutic foods, medical supplies and temporary shelter to Jacmel and Port-au-Prince. UNICEF will also be focusing on children who have become separated from their families to protect them from harm or exploitation.
CARE plans to start food distributions using stocks of high-protein biscuits from CARE warehouses in Haiti.
The Clinton Bush Haiti Fund is raising funds for immediate, high-impact relief and long-term recovery efforts to help those who are most in need of assistance. The fund is led by former presidents Bill Clinton and George Bush.
The Red Cross is helping to provide medical care and supplies to Haitians displaced and injured during the earthquake.