Powerful acting and thrilling plot make for a beautiful film

Natalie Portman stars as Nina, a ballerina who has worked all her life to get a major role in a production. When her dance company's director Thomas Leroy (Vincent Cassel) decides to replace Beth (Winona Ryder) for the new production of Swan Lake, Nina is immediately chosen. However, Leroy makes it obvious that she has a huge role to fill—he sees Nina as the graceful White Swan, but she must learn to be the seductive Black Swan as well. Also entering the scene is Lily (Mila Kunis), who proves to be Nina's biggest competition. The relationship between Nina and Lily intensifies into a breathtaking competition that begins to destroy Nina psychologically as she tries to reach perfection.

Portman's acting in "Black Swan" thrills the audience as her character becomes increasingly twisted. Portman portrays Nina's emotions passionately and is able to capture her inner chaos beautifully. Adding to Portman's thrilling performance is Kunis, whose exotic beauty and electrifying personality makes Lily perfect for the role of Black Swan.

Portman and Kunis work well together, making it easy for the audience to understand the differences between the White and Black Swan. The relationship between Nina and Lily is one of the biggest highlights of the movie, as the two are able to work well off each other and showcase two completely different personalities. 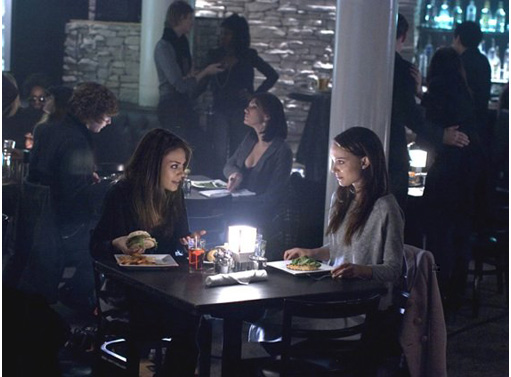 Photo: Caption: Nina (Portman) and Lily (Kunis) go out for drinks in a night that defines their relationship for the rest of the film.

Photo: Caption: Nina (Portman) and Lily (Kunis) go out for drinks in a night that defines their relationship for the rest of the film.

Symbolism is evident through the film, with the colors black and white clearly playing a huge role throughout. The most obvious color symbolism is the colors worn by Nina and Lily in the film; Nina almost always wears white, while Lily wears black throughout. As Nina's character begins to develop a darker side, she starts wearing darker colors to show the development of her character. Nina's mother (Barbara Hershey) also wears black throughout the film, representing a character that pressures her daughter and tends to be overly protective towards Nina.

Cinematography is also critical in "Black Swan" as Nina begins to spiral downwards. Aronofsky makes use of many close-up shots throughout the film, especially in scenes where Nina begins to discover herself. As Nina seems to develop slight feelings for Leroy—and for Lily—the closer shots display pure, raw emotion in Nina's face, making it easier for the audience to connect with her.

Aronofsky turns the audience inside out as he pulls them through the depths of Nina's psychological breakdown. The viewer never truly knows what exactly has happened to Nina, only that her drive for perfection has turned her into an evil, darker form of her previous self. Aronofsky leaves the audience guessing throughout the film, which makes the overall film very interesting and chilling.
Another small touch that produces beauty in this film are the costumes worn by the ballerinas. The costumes in the last ten minutes of the film are absolutely immaculate. The costumes in the final scene are essential in developing the ending and also in developing the nature of Nina's character as the film comes to a close.

"Black Swan" itself is nothing short of perfection: the film leaves the viewer completely thrilled and amazed at not only its spellbinding plot but by the acting of its stars. Aronofsky's masterpiece is a sure Oscar nominee and hopefully an Oscar winner, as Portman's performance signals a new era of her career.

"Black Swan" (108 minutes) is Rated R for strong sexual content, disturbing violent images, language and some drug use. The film is on limited release but can be seen at AFI Silver in Silver Spring.