There was Sept. 11 in 2001, Hurricane Katrina in 2005; now the Gulf oil spill will have a place in history as 2010's catastrophe. On April 20, the Deepwater Horizon rig, an offshore platform leased by Transocean for BP, exploded off the coast of Louisiana, killing 11 individuals. Called "a potentially unprecedented environmental disaster” by President Barack Obama, one of the worst since the Exxon Valdez oil spill in the late 1980s, the spill has resulted in a massive leak advancing across the Mississippi Delta, Gulf of Mexico and the coasts of Alabama and Florida at a rate of around 5,000 barrels per day, according to CNN. 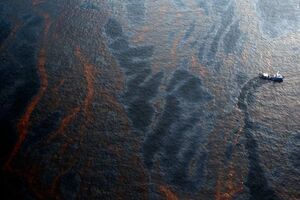 Photo: The Gulf of Mexico is suffering the consequences of a massive oil spill that has yet to be contained.

Photo: The Gulf of Mexico is suffering the consequences of a massive oil spill that has yet to be contained.

As with all disasters, a blame game has begun, with the main target being BP, the company whose oil spilled onto the Louisiana coast. While Obama has clearly stated that "BP will be paying for the bill," BP CEO Tony Hayward has instead attributed the spill to the owners of Transocean, the deep sea drilling rig that provided the well and technologies for the drilling. "The drilling rig was Transocean's drilling rig, it was their equipment that failed, it's their systems, their processors that were running it," Hayward said. There is even another potential contestant in the arena, Halliburton, who did the cement work for the drilling. People might as well - and have already - denounce the wind, currents and other uncontrollable natural forces at the time for the oil spill. Although it is the immediate impulse, playing the blame game fails to promote action or inspire cooperation and unity.

What can be done, however, is swift uptake to prevent the further spread of oil. BP has taken responsibility to stem the oil leaks through various measures, including building a containment dome and installing a shutoff valve, according to the New York Times. Others are also stepping in, including the Coast Guard, which is burning off the oil, as well as environmentalists who are addressing the potential species affected by the spill such as pelicans and native fish. Despite the bureaucracy and red tape inherent in processing natural disasters, the collective force of generous people in our country, from volunteers to organizations such as Greenpeace, who act immediately and magnanimously when there is a crisis, is truly reassuring.

Yet in addition to addressing the situation, we also have to think about the long-run: how to prevent such catastrophes from happening again or at least significantly reducing the probability of another hazardous oil spill. The central issue the oil spill raises is proper use of information about drilling conditions. With a known history of corporate misconduct in following guidelines for drilling, in addition to knowledge about faulty and unfixed equipment for drilling, conditions reported to the Department of Interior by the National Oceanic and Atmospheric Administration (NOAA), the incident could have been alleviated if regulations were recognized and followed.

The oil spill has come a month after Obama lifted an offshore drilling ban, an act that has generated positive bipartisan agreement in energy policy in the Senate. Although no new domestic drilling will be authorized until the BP spill is addressed, according to White House senior adviser David Axelrod, the recent disaster questions whether it is right to sacrifice the environment for the sake of cooperative energy security. We have to ask ourselves: at what cost?