The flick is too predictable and cliched to hold audiences' attention

It seems as though every summer brings a new, typical shark movie. This year's was Jon Turteltaub's The Meg. With flat acting, an unoriginal script and an uber-predictable plot, The Meg is nothing spectacular when compared to shark movies like Sharknado (2013) or Jaws (1975).

The movie opens with reluctant diver Jonas Taylor's (Jason Statham) attempt to rescue three deep-sea explorers whose submarine has been attacked by a giant shark called a megalodon; this mission comes just five years after another submarine rescue that Jonas failed because of an attack by the very same shark. After managing to bring two out of three explorers back to Mana One, a Chinese rig funded by the power-hungry Morris (Rainn Wilson), Jonas joins the team of explorers there and develops a romantic relationship with Suyin (Li Bingbing), the resident marine biologist. At the same time, the team realizes that the megalodon has broken through the depths of the ocean and can easily kill anyone. What follows is a complicated chase that forces the Mana One crew to frantically follow the shark through the water and toward a crowded tourist island in a race against time and nature.

One of the most noticeable features of The Meg is its attempt at shocking jump scares and plot twists that are not shocking at all. Throughout the movie, you can predict what's going to happen way before it actually occurs, simply because the film succumbs to the typical action feature stereotype of danger followed by a rescue followed by more danger. The script itself seems like it was pieced together from other movies, mostly because the jokes — everything from the overused gibe of a white guy speaking bad Chinese to a Finding Nemo reference — fall flat and the dialogue in the so-called inspirational scenes is embarrassingly cliche. In general, the film is far too unoriginal and drawn out, leaving audiences uninterested. 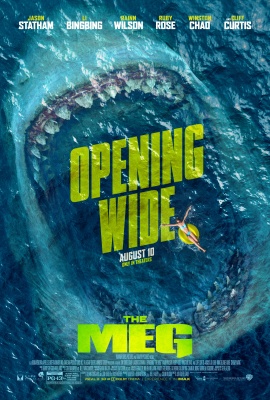 Photo: The Meg proves to be an unmemorable shark movie featuring an unoriginal plot, predictable scenes and below-average acting.

Further retracting from the movie's appeal, most of the actors' performances are unconvincing. Winston Chao, who plays famed oceanographer Zhang, sounds like he's reading his lines off a cue card, especially when he's supposed to be comforting a fellow crew member (which is often). Despite the emotional scenes she's involved in Bingbing executes her part similarly, giving the impression that she couldn’t care less about what she's saying. These questionable performances are redeemed by Shuya Sophia Cai's portrayal of Suyin's daughter, Meiying — while her role is not significant, her acting brings a cute-factor to the movie.

What The Meg lacks in other areas, it makes up for in cinematography, editing and casting. Cinematographer Tom Stern uses a variety of angles and lighting composition to show the stark contrast between the many locations used in the film. The predictable action scenes put a damper on the editing, but editor Steven Kemper does his best to create fast-paced, smooth sequences. The movie features a cast filled with strong female leads, something that's not seen often in Hollywood, and several actors of color — while the latter is partly because The Meg is a Chinese-American collaboration, it's still a pleasant surprise. However, these positives still don’t outweigh the negatives — the unoriginality of the film overshadows everything else.

If you want mindless, non-revolutionary summer entertainment, The Meg is a good choice. But if you'd prefer a movie that explores uncharted territory and keeps you on the edge of your seat, don't bother. Ultimately, The Meg joins the ranks of all the other non-memorable action movies of the world.

The Meg is rated PG-13 for action/peril, bloody images and some language.