A "Mikado" of bravado

The Montgomery Blair Players presented Gilbert and Sullivan's "The Mikado" in the Blair auditorium on Friday and Saturday night. With charming bravado, director Kelly O'Connor and the Blair Players adapted an antiquated musical to a modern setting by adding new lyrics and hip-hop and jazz choreography. 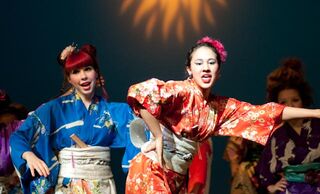 "The Mikado" is a musical that satirizes Victorian politics and British obsession with Japanese culture. The story unfolds in the town of Titipu, Japan and focuses on the life of Nanki-Poo, a wandering musician that comes to Titipu to marry his love, a girl named Yum-Yum. When he arrives, he discovers that Yum-Yum's fiancée Koko has been released from jail and later becomes the town's executioner. Koko plots to marry Yum-Yum and execute Nanki-Poo, but things change when the Mikado, or Emperor, arrives in town. Although the threat of execution is always present in this topsy-turvy Japan, Blair's production of the Mikado is all about fun, and in that regard, O'Connor and the cast are successful.

In the wake of a recent announcement that the players were $8,000 in debt, O'Connor faced the taxing challenge of adapting the play to appeal to high school students and working with a tight production budget. Nonetheless, she excelled in both realms, asthe play was entertaining and extravagant despite the low budget.

Because of the play's money crunch, O'Connor was forced to scale back on costumes and set design. The general ensemble costumes featured short kimonos with black tights for ladies and white wrapped shirts with black pants for the men. The overall simplicity in attire did not detract from the splendid performances of the diverse ensemble cast and lead actors. Instead, the lack of complex costumes helped the audience concentrate on understanding and appreciating the fast Gilbert and Sullivan lyrics that sprung from the lips of the cast.

The set was a general town square setting that remained on stage throughout the whole play. The oversized Japanese bridge and green plants brought out a caricatured side of Japan that excellently matched the modern hip-hop choreography sprinkled through the play.

Several of the evening's most enjoyable moments came from songs in which O'Connor updated the archaic lyrics to satirize modern cultural trends, as well as poke fun at herself and the cast. In the song, "As Someday It May Happen," Koko gives a list of people he would execute if he had to choose anybody. O'Connor cleverly included B-List actors, Blackberry users, "hammy student actors" and "a theater director who cracks up at every line" on the list of people who would not be missed.

In addition to clever lyrics, the pit orchestra performed an updated score to reflect a funkier trend. The skillful combination of oboe with violin gave a Eastern Asian sound to the orchestra. The drums and gong that accented the arrival of the Mikado were an entertaining incorporation of the score into the actual plot.

To complement a beautifully performed score, Jonathan Guzman (Koko), Tina Munoz Pandya (Yum Yum), and David Jackson (Nanki-Poo) had dynamic vocals, delivering even the fastest Gilbert and Sullivan lines clearly and comfortably, with hilarious mannerisms contributing to an outstanding overall performance by the cast. Senior Jonathan Gillette captured the Mikado as a kingly celebrity while performing hilarious dance moves. Senior Jeremy Potterfield (Poo-Bah) was a comically pompous politician with an excellent singing voice. Senior Nicolette Harley (Katisha) played the power hungry, arranged fiancee to Nanki-Poo, with ferociousness that was both intense and spunky.

The cast will perform the last shows on April 23 and 24. The show is so entertaining that despite what the lyrics may say of O'Connor and the cast, "they'll all of them be missed" after next weekend.