Adrien Brody's newest film is a piece of fluff

In "The Jacket," Adrien Brody stumbles around, confused and dazed. "I don't know why I'm here," he says pitifully. Audience members ask themselves the same question. Brody, an Academy Award winner highly praised for his work in "The Pianist" deserves better. What is such a gifted actor doing in a poorly developed piece of fluff? 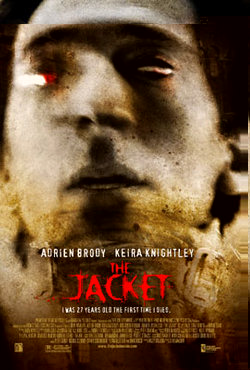 Photo:
"The Jacket" follows Jack Starks (Brody), a Gulf War veteran who suffers from amnesia after being shot in the head, as he is wrongly convicted of murder and committed to an asylum. Both Starks and Dr. Becker (Kris Kristofferson), the head doctor, know that Starks isn't mentally ill, but Becker wants to use Starks in his new treatment program. The program, which probably wouldn't be used or approved by any real doctors, consists of Starks being bound up in a pseudo-straitjacket and placed in the kind of metal drawer usually reserved for dead bodies in a morgue. While in there, Starks is able to visit the future and find out information about his impending death. Using information gained from the future, he resolves to try to make things right in the present.

One of the most puzzling parts of the movie concerns Keira Knightley's character, Jackie. Starks meets Jackie as a young child a few hours after he is arrested for murder, and she instantly likes him. A few days later, after he is placed in the jacket and visits the future, Starks comes across Jackie again, but this time she's all grown up. Starks realizes the jacket's time-traveling abilities and recruits Jackie to help him figure out more about his death. During the few days they spend together, Jackie and Starks fall "in love" (or as close to being in love as possible when two people know little or nothing about one another), and Starks decides to try to fix Jackie's unhappy future life by changing things in the present. Why Jackie should agree to help a creepy, elusive man who claims to be from the past is beyond any reasonable thinking, as is Starks' strange fondness for a little girl he talked to for only a few moments.

The whole movie is just full of too much of everything. Too many shaky, "artistic" close-ups, too many strange, jumpy collage shots and definitely too much overacting fill this film. Indeed, all the actors in the movie seem to believe that if they just acted a little more over the top than their compatriots, then maybe they'd get some more screen time. Veteran actors Jennifer Jason Leigh and Daniel Craig, who are usually moving and excellent in all of their films, overplay their roles as a doctor and a mental patient, respectively. Leigh frowns and sighs, dragging herself slowly and painfully to the conclusion of the film, as if her heart weren't really in it. Craig twitches and stutters as an anxious patient who befriends Starks.

And then there's Knightley. Taking on her first "serious" role, she seems intent on turning herself from being the butt-kicking damsel she's known for into a slovenly, drunken mess. The extent of Knightley's acting is her stumbling around with flyaway hair and dramatic eyeliner and peering confusedly at everything as if to say, "How did I get from slaying skeletal pirates to this?"

The only word to describe the feeling after "The Jacket" finally clunks along to its anticlimactic ending is relief. It's painful to watch such a talent like Brody wasted in a such a truly worthless movie.

"The Jacket" (103 minutes) is rated R for violence, language and brief scenes of sex and nudity.