A movie that will catch your "Eye"

The sight of Jessica Alba on the cast list is usually enough to make the average viewer cringe. Her notoriously shallow roles, coupled with stunning looks, brand her as one of Hollywood's most consistently scrutinized actresses. But after seeing "The Eye," a remake of an overwhelmingly popular Chinese film, many people may need to reconsider this standpoint. Directors David Moreau and Xavier Palud have conceived a balanced storyline with appropriate volumes of trepidation and laudable acting.

The movie opens with warm sunshine and melodious music, suggesting that "The Eye" is not merely a non-stop horror movie, which makes for a more solid, directional plot. Sydney Wells (Alba), blind with walking stick in hand, moves happily through a busy urban commute. The following day, she undergoes cornea transplant surgery to regain her vision. It's immediately apparent that things have not gone as smoothly as the doctor claims – ghostly apparitions and figures resembling the grim reaper cloud her still-blurry eyesight. 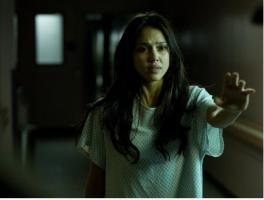 These appearances by themselves are not quite so terrifying as the music and camerawork that accompany them. Flickering close-ups of Wells' eyes and the ghost's silhouette persuasively reproduce her confusion and anxiety for the viewer, though the sudden jump-scares are an obvious cliché. But Alba's acting, surprisingly, makes up for the horror genre rip-offs. In one scene where she is trapped in an elevator with a grotesque, floating corpse, her apprehensive face visibly intensifies into panic as the body moves closer.

Despite the plethora of bloodcurdling encounters though, Wells displays an unusual amount of bravery and curiosity. She is eventually drawn towards the donor of her cornea, the source of her visions. Joining forces Dr. Paul Faulkner (Alessandro Nivola), her' eye consultant and specialist, Wells sets out to find the previous owner of her mysterious eyes. In the process, she comes to terms with her ability, whether a gift or curse.

Perhaps the overall message of the film is that Wells was better off without sight. Earlier in the movie, she is empowered by her other senses – in one scene, she uses sound to save a man from a speeding bus. With her new eyes, she becomes submersed in her own chaotic thoughts and is almost hit by a car herself. Her once-agreeable life as a violinist clearly contrasts with the dismal, supernatural world in which she now lives.

"The Eye" is not unlike many successful films of its type, such as "The Grudge" or "The Sixth Sense." But it has a pleasant feel that many hard-core horrors lack. Vibrant colors and clear skies result in an interrupted spookiness that allows for friendship and courage to shine through – acting that involves more than just screaming. In fact, Alba spent time living without her vision to better perform as a blind character; she wore sleep shades (a type of blindfold), used a cane and learned to read Braille. Though Wells is alone throughout most of the movie, a few supporting roles scattered throughout the film dramatically improve the plot's structure. Alicia Millstone (Chloe Moretz), a young, terminal brain cancer patient, builds an unexpectedly powerful relationship with Wells, and Wells' orchestra conductor, Simon McCullough (Rade Serbedzija), represents an necessary connection to her life before the surgery.

Usually, "Jessica Alba" is synonymous with "bad actress" and "remake" equates to "overdone." But "The Eye," though somewhat predictable, manages to breakaway from the projected stereotypes and hits the screen as a respectable film worthy of its Super Bowl weekend premiere.

"The Eye" is rated PG-13 for violence/terror and disturbing content.