A New Era for Blair Football

How Head Coach Dr. Andrew Fields has led the Blazers to success

For the entire 79 years of Montgomery Blair High school's existence, its football team has never made it to the Maryland state playoffs. This season, the Blazers' first chance at the playoffs is more tangible than ever, set poetically against the backdrop of Blair's 80th anniversary. At the helm of the Blazers' winning season is Head Coach Dr. Andrew Fields.

On Jan 25th, 2013 Blair, desperate for a new start, hired Fields as the new head coach of the football team. Fields left his post as assistant principal at Gaithersburg High School and inherited a band of eager underdogs with a 2-8 record that had only won 25 games in the last 9 seasons. "When I came to Blair," Fields recalls, "I saw energetic players with big hearts and big goals and big dreams that were excited to play sports and excited to be a part of Blair and proud of their school."

During the 2013 season Fields, to the surprise of many, was able to guide the Blazers to a 5-5 record, their first non-losing season since 2008. Now, in 2014, the team has a 4-1 record. Their only loss so far was to the athletic powerhouse Sherwood High school by one touchdown. Our success has everything to do with [the] 60 kids that put on the helmets on Friday night and [the] 10 coaches that put in a lot of time getting the kids ready and coaching specific positions." Fields insists, "I really have very little to do with the success." Fields denies his influence on the program, but his contribution cannot go unnoticed. 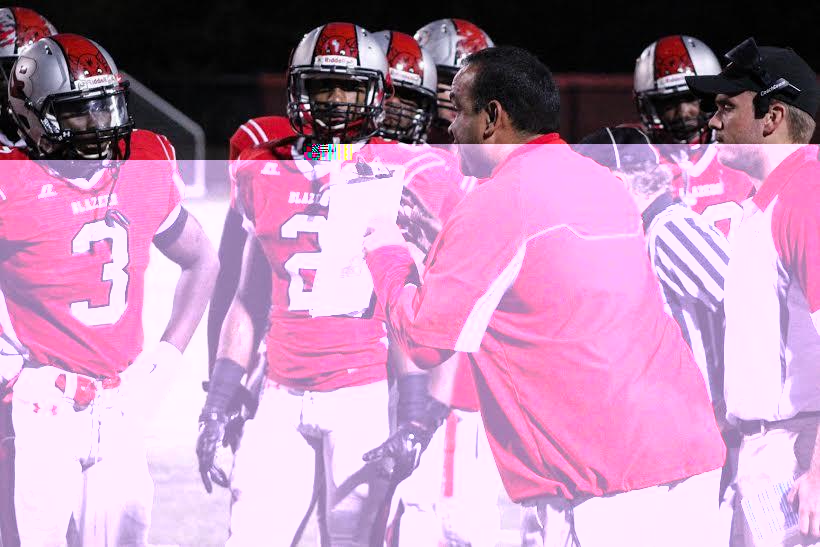 Photo: Head Coach Andrew Fields fires up his players during a game.

Photo: Head Coach Andrew Fields fires up his players during a game.

Fields has been passionate about football for as long as he can remember. "I played [football] all through boys club in Olney, and I played at Sherwood and then Towson in the nineties," recalls Fields. At Towson, Fields majored in English. He eventually received his doctorate degree in school policy and leadership from George Washington University. After college, he returned to Montgomery County, where he has taught a few years of English, but mostly served in administrative roles at many different schools. "I may be better off naming all the schools I haven't been at," he says with a laugh.

Even as Fields worked as an educator, football managed to find him. In 1995, Fields started his coaching career as an assistant coach for Winston Churchill High School. After coaching at Churchill, he then moved on to serve as assistant coach at Poolesville, and then at Northwest for over a decade. Fields served as head coach of Northwest High School for the 2008-2009 school year, before he resigned to resume his fulltime administrative job at Gaithersburg High school. But after a four-year break, Fields returned to football as Blair's head coach. "I was an assistant principal for most of my career, so this is a change for me," Fields says. Besides coaching the football team, Fields teaches three soccer physical education classes and is also involved with the Latino Educational Achievement Partnership (LEAP). The LEAP program is dedicated to providing students of Latino heritage with a pathway for academic success. Although football has become the center of Fields' life, he relishes his extraordinary pastime of flying planes. "I have a pilot's license and so I enjoy flying out of Gaithersburg Air Park, which I don't get to do much of during the football season," Fields says with a laugh.

A seasoned coach, Fields has learned through years of experience that the only key to success is unadulterated hard work. The first thing Fields taught the Blazers was that there was no replacement for effort, in all aspects of life. "The early success we are having is a direct result of the work that [the players] have put in and there is no way around that," Fields asserts. "[The success] is not anything else other than the work they have put in; [the coaching staff] just provide an avenue for them." Upon his arrival, Fields instituted a rigorous offseason program for his players. This program included running and lifting sessions four times a week, as well as player involvement in several football camps throughout the year. "I like to think that the strenuous part is done in the offseason. So I don't kill the kids during the season, but I do kill them during the offseason," Fields says with a laugh.

Another of Fields' main priorities as head coach was to peel away the team's mindset that Blair was confined to wins only within the Down County Consortium (DCC). "I think the biggest thing we've tried to instill in the kids," Fields says genuinely, "is getting away from that DCC athletic mindset as we've tried to separate ourselves from the other schools we may compete with in the Down County like Einstein, Northwood and Kennedy. That is not where the competition is." Ibu Bundu, a senior on team, played football for Kennedy before coming to Blair his junior year. He notices a key difference between the coaching styles. "At Kennedy, the program was definitely less rigorous and focused," Bundu notes.

Discipline and commitment are highly valued on the team. Fields enforces a no-tolerance policy when it comes to missing or coming late to practice. When a player is absent from a practice, his playing time is significantly reduced. Fields holds every player to this law, including starters. "Our expectations are sky high and we stand by them," asserts Fields. Fields' strict policies extend to academics. The team holds a study hall three or four days a week and Fields consistently communicates with teachers and parents whenever there is an academic concern with a player. "To me it's so much more than eligibility," Fields asserts. "The biggest thing we want is not just for football players, but for all kids in the May of their senior year to have options." The team also has a program called Coaching Boys into Men that aims to foster important values in the players such as courage and determination. "Every week we have a different theme, and it's very important that we try to instill character and values that any self-respecting man should have," Fields says. Fields and the coaching staff assume responsibilities beyond coaching and have taken strides to inspire change in his players. "Fields makes us work harder through discipline," says senior Marcus Forrester. "He pushes us to do our best."

"We always talk about the history of Blair, what Blair stands for," Fields says passionately. "It's not just about them or me or any of the coaches. There is a long history of people that have gone to Blair that take pride in the school and take pride in the history of this school." Now, Blair football has ingrained itself as part of the school's history as the team marches on towards the playoffs. As the Blair community wishes the team good luck before each game, Fields teaches his players that there is no luck, only hard work. "I believe that luck is reserved for those that are unprepared," Fields exclaims, "I believe these kids are prepared for every moment in the football game, and so I don't say, 'Good luck.' What I say is 'Have fun.'"