A new kind of parent-teacher association

Blazers share their home and school with their parents

Sophomore Michael Morganstein walks down the hallway, pausing to say hi to his various friends. Suddenly he hears "M-Squared," his family nickname, booming down the corridor. He turns around and sees his dad smiling at him.

For the handful of Blazers whose parents work at Blair, seeing parents at school is a weekly or even daily occurrence. Though parents everywhere are known for embarrassing their teenage children, these Blazers have grown accustomed to seeing their parents in the building.

But despite a few embarrassing moments, having their parents in the mix of the 3,000 students and staff members at Blair is part of these students' routine.

Saved by the bell

As the bell rings, the hallways become crowded with masses of students and teachers heading to class. As senior Tallin Walker travels
the hallways, she faces the possibility of seeing her mom, reading teacher Cindy Spoon.

For Walker, hallway experiences with her mother mean more than just a wave hello. Spoon jokingly threatens Walker with embarrassing situations. "I tease her that if it's crowded, I'll walk up to her and be like, 'You have a smudge on your face,' which I would never do," remarks Spoon.

Magnet math teacher David Stein, Morganstein's father, also says that when he sees his son or his son's friends in the hallway, he jokingly makes fun of them. "I've been embarrassing that kid since he was four, so I think he's pretty used to it," Stein says, justifying his behavior. 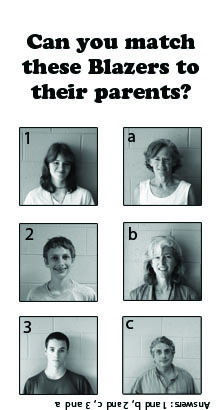 Photo:
In contrast to Stein's approach, Morganstein likes to keep their hallway conversations formal, treating Stein as a teacher, not a father. "I saw Michael once in the hallways last year," remembers Stein, laughing. "He said, 'Hello, Mr. Stein,' and then walked by."

While the parent/teacher duos often joke around at school, senior Jonathan Bullard-Sisken, son of composition teacher Kate Bullard-Sisken, realizes that his actions can affect his mother's reputation; he knows if he were to be rambunctious, the consequences would be negative. "If I ran around a lot, it wouldn't look so great for her," he says.

Morganstein feels that having his father at school is like having an extra pair of watchful eyes supervising him. He also worries that if he misbehaved, his teachers would not only think poorly of his father but also tell his father of his misconduct.

Despite Morganstein's worries, Stein says he tries to keep the relationship with his son's teachers as normal as possible. "I try to [act] as if I wasn't working here," says Stein.
Although students feel the pressure to behave for their parents, they know that their parents will always be available for them.

Kate Bullard-Sisken likes having her son's teachers nearby. In an emergency, she explains that she can always just run to their office to meet with them.

"I know if I ever need something, she's right there," explains Jonathan Bullard-Sisken.

While Kate Bullard-Sisken is grateful that her job allows her to be available in times of emergency, Stein views his proximity to his son in a light-hearted way. "If his parents get mad at me we'll have a conference. I'll be on one side of the desk and then switch to the other. It will be fabulous!" he jokes.

For Morganstein, this situation isn't just a funny hypothetical. He explains that he might take his dad's class in his senior year. According to social worker Dawn Taylor, seeing parents in a different role in an environment outside of the home can be a good thing for teenage students. Taylor warns, however, about the possibility of an uncomfortable situation between the parent-teacher and student. "It can be sticky if the child doesn't do well and the dad is disappointed," Taylor explains. "As long as the communication is open, I think it could be a great experience."

This pressure hasn't altered Walker's relationship with her mother. Walker describes their relationship as "pretty laid back" and says that having her mom teach at Blair doesn't really affect it. "I find it more of a help than a hindrance," says Walker. She explains the many advantages of her mom's position at Blair, which include free rides to school in the morning, allowing extra time for sleep and having a financial fallback plan. "If I'm short on cash…" she says, hinting.

Stein, too, sees the benefits from the relationship between himself and his son while at school. "It's good to have your son go to Blair, because you get to see how the school works not only through a teacher's eye but also through a student's eye," he explains.
Morganstein, Jonathan Bullard-Sisken and Walker don't mind sharing fire drills, Blair Boulevard or pep rallies with their parents.

In the end, while some teenagers gasp at the thought of having their parents teach at their school, these Blazers find it a positive thing, and they enjoy their parents' presence. For them, it's just another day at school.