A new menace to democracy 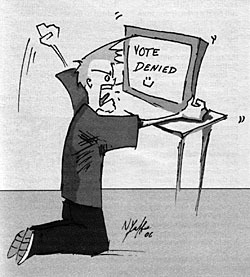 This September, many Blair seniors were eligible to vote for the first time, but some of them found casting a ballot harder than they had expected. When voters in Montgomery County went to the polls to vote in the primary elections on Sept. 12, many were turned away.

That morning, the Montgomery County Board of Elections had failed to deliver the plastic cards necessary to activate electronic voting machines at all 238 polling centers countywide. Polls scheduled to open at 7 a.m. opened as late as 11:30 a.m. As a result, election judges were instructed to allow voters to use provisional paper ballots. But many polling places quickly ran out.

Even after voter access cards were delivered, many polling places were still not operating because printers, used to give voters a ballot confirmation receipt, malfunctioned. The Board of Elections extended voting times one hour to allow those who could not vote in the morning a chance to do so, but the Board will never know how many voters went to the polls and were turned away.

After the failure of the electronic voting system in the primary elections, county and state officials are investigating how the Board of Elections failed to deliver the voter cards. This debacle is just one more reason why Maryland must return to paper ballots for the upcoming general elections.

Voters should also be concerned whether their vote was recorded accurately. The Princeton University Center for Information Technology Policy recently released a video that details how someone could upload a computer program to the electronic voting machines the day of the election and alter the results.

Questions have also been raised about the integrity of some companies that market electronic voting machines, like Diebold, which have close ties to the Republican Party. Before the 2004 elections, Walden O'Dell, chief executive officer of Diebold, wrote a letter to Republicans voicing his commitment to delivering votes to President Bush, according to The Cleveland Plain Dealer.

On Sept. 12, only 24 percent of eligible Montgomery County residents voted, an 11 percent decrease from the 2004 primary, according to the Montgomery County Board of Elections web site, which may give some indication of how many voters were turned away. Fears that votes will not be properly counted or that people may be turned away from polling places and denied the right to vote will only further contribute to low turnout rates.

Montgomery County must make sure that the Board of Elections is prepared for the general elections on Nov. 7. The state and county do not have sufficient time to properly review the mistakes that occurred Sept. 12 and reestablish the public's confidence in electronic voting. Until people regain trust in electronic voting, Maryland should return to traditional paper ballots.