A new president, but all else the same

When Barack Obama entered the House of Representatives chamber Wednesday night, he received applause from all in attendance. He shook numerous hands and donned his charming trademark smile. But as the president assumed his position at the podium and began to speak, there was a sense of apprehension in the hall. 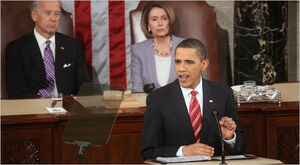 Obama's state of the union address

Photo: Obama speaks to a packed hall and Americans on T.V. during his State of the Union Address, which focused largely on the state of the economy.

Photo: Obama speaks to a packed hall and Americans on T.V. during his State of the Union Address, which focused largely on the state of the economy.

There was a great deal of anticipation for Obama's first State of the Union Address as President of the United States. The 44th President was inaugurated during a tumultuous time; as Obama stated, he took office "amid two wars, an economy rocked by severe recession, a financial system on the verge of collapse and a government deeply in debt." Now with ongoing wars, high unemployment and an unresolved health care bill, how would President Obama go about presenting a speech to assuage the concerns of the American people?

The president employed his eloquent use of language to make bold, sweeping statements - an element characteristic of most State of the Union addresses. Amongst his short stories about optimistic small-town Americans, Obama did directly address major issues in Congress' agenda. But while his State of the Union Address included several credible propositions, President Obama seemed to simply be reiterating unfulfilled promises made more than a year ago.

The economy was, as expected, the major theme of the president's speech. Obama addressed the high unemployment rate, the rough recent history with banks and the unjust success of Wall Street big businesses. On this topic, Obama proposed that Congress focus on creating an effective jobs bill and helping small businesses succeed. In other areas, Obama was less specific. Although he praised research conducted on clean energy technology and called for further exploration, he gave no detailed plans of action. Likewise, Obama set goals for doubling American exports, but indicated no means of achieving them.

Particularly disappointing was Obama's briefing on the Afghanistan and Iraq wars. Not only did Obama say little about American progress in the regions, but his message also sounded eerily similar to his claims a year ago. Furthermore, his desire to build trust between the government and the public was not very different from his promotion for government transparency during his presidential campaign.

Obviously, it is unfair to expect a great deal of progress from President Obama, despite his promises in 2008. After only one year, the president has not had much time to put his plans into action. While most of his goals remain unachieved, President Obama's State of the Union did convey a determination for change. We can only hope that next year we will not be hearing the same recycled promises and excuses. As President Obama said with confidence, we need to try something new.