A new way for Green Day

If one tunes to MTV on Sept. 6 at 8 p.m. they will see numerous current artists and bands performing live at this year's Video Music Awards (VMAs). Among them, Green Day will be performing for their fifth time ever at the VMAs. Besides Madonna, Green Day is the band that has performed the most times at the VMAs. They will be playing music from their new trio of albums ("¡Uno!", "¡Dos!" and "¡Tré!") for the first time ever on television, according to MTV's website. 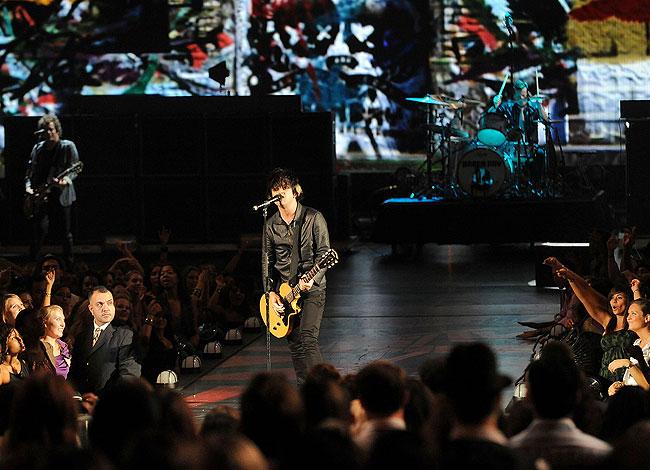 Green Day is an American band consisting of Billie-Joe Armstrong, Frank 'Tré Cool' Edward Wright III and Mike Dirnt. They started off as a punk band in 1987, and became famous in the early 90s. Their early music could be described similarly to any other punk band of that time: attempting to differ from any other types of music and rebelling from the normal 90s pop music. But as times changed so did their sound; they have been adapting over the years to stay popular and get fresh fans while still trying to keep their previous ones. In the process, they have lost a handful of fans who believed that the band changed their music because of society's new expectations. This method of conforming is not a bad thing, though, because they have been a very popular, well-known band around the world this past decade due to their music changes.

Although Green Day's sound and tempo have changed to become a little slower and calmer in some songs, the messages of their songs have generally stayed the same throughout their past eight albums. Over the years, the band has written many protest songs in remonstration of various different things going on at the time. In their 1992 album, "Kerplunk", they rebel against growing up in songs such as "No One Knows" and "Welcome to Paradise" where they showcase their post-teenage angst and their endeavor to leave home and be on their own.

Similarly, in their two most recent albums from 2004, "American Idiot", and 2009, "21st Century Breakdown", they sing and rant in protestation. Generally in those two albums they show their obvious dissent towards war with lyrics such as "The shame, the ones who died without a name" from "Holiday", and "Lay down your arms give up the fight" from "21 Guns".

Although some may categorize Green Day's more recent music as "pop punk" as opposed to the "punk rock" or "alternative punk" of their past music, the messages that come across through the songs are the same. This has kept their original fans supporting them, while getting new supporters to join in with their new sound.

Some may say their change from their original rebellious sounding music to a more contemporary, pop sound is due to age and that they are just growing up and out of that style of music. But, it is assumed that this change was a strategy to gain new fans. Although their musical sound has changed to become more mainstream and pop sounding, the messages in their songs remain the same.

Because of their music changes the past 25 years, we can assume that they will keep adapting and evolving to gain new fans while keeping the old as they record and write new songs. As this continues, some listeners may take a disliking to them because of their music's conformity with mainstream music.