With eleven years of establishment and six successful albums, InToneNation (ITN), Blair's student-run a cappella group, has made quite a name for itself. In this case, the name is "Leave a Message After the Tone," ITN's seventh and most recent release. The album is a live recording from May, complete with nineteen tracks which demonstrate the group's strengths and show their potential for the future.

The album opens with Tom Petty's "Free Fallin'," flaunting the voice of one ITN's most impressive singers, senior Nathan Blustein. Blustein's range is wowing, and he doesn't miss a note in the foreground of the balanced harmonies. He is equally outstanding in Don McLean's ballad, "Vincent," as well as in his rendition of the Beatles' "For No One." Equally notable is "The Longest Time," featuring 2005 graduate John Willmott, who phrases the song beautifully. The quiet harmonies are especially fitting for the tenor's exceptional chest voice. 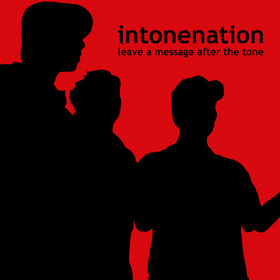 Photo:
Willmott's voice is exhibited to an even greater extent during ITN's rendition of The Barenaked Ladies' "It's All Been Done," though with seemingly more difficulty as the song appears to win out in a battle against Willmott's otherwise impressive range. Other misfires include "In the Still of the Night," featuring graduate David Crawford, who should have asked more assertively for a song in his bass range, and "Material Girl," which sounds as though it would have been much more successful with a bit more rehearsal time. "Brick" begins well with a steady harmony and melody, but falters with a note that, again, seems to be just one note out of Willmott's range.

Graduated senior Brittany Moyer is at her best with "Both Hands," the most enjoyable track on the album, originally performed by Ani Difranco. The harmonies in this song imitate Difranco's guitar chords wonderfully, subtly fading in and out and framing Moyer's precise voice with perfection.

Sabrina Shapiro, another '05 grad, steps up to the plate with "Take On Me," a song that sounds more difficult to undertake than the National Anthem, and nails every note with seeming confidence. Shapiro sings loudly enough to stand out, but does not drown out supportive harmonies or Paul's multipart beat-boxing.

Alto Jody Pollock, a senior, adds a powerful beginning to "Amazing Grace," the most intricate track on the CD, and couples that with a single harmony to introduce the most impressive cut, mechanically speaking. The exciting cannons are perfectly on time and on pitch, drawing attention to each element of the complex song.

In truth, the cuts without solos sound the most professional, as they show off ITN's cohesiveness and ability to make gorgeous harmonies. The Madrigal "My Heart Doth Beg You'll Not Forget" and John David's "You Are the New Day" do just that, demonstrating the diversity of bass, tenor, alto and soprano voices in the group. The Proclamers' "I'm Gonna Be (500 Miles)" is a thoroughly fun ending to the album, featuring just about everyone in the group, and exposing voices not yet heard on the album. Junior Diego Ardila, for example, successfully takes on the choruses of the song, while Willmott, Bluestein, and senior Tess Minnick have especially distinguished solos.

While these guys may not be quite ready for primetime, "Leave a Message After the Tone" is a reminder of why the group is so widely respected both inside and outside Blair's walls. Solid harmonies, energetic melodies and overall cohesiveness are what make ITN such a great high school group. Now, with room for improvement, they can make an even more impressive next release.

Order requests for "Leave a Message After the Tone" can be sent to itn.mbhs@gmail.com.