Basketball fans will focus their attention on Houston during the All-Star Break is not just because some of the best players in all of the NBA will appear in the featured game. Yes, technically the NBA stops to focus on showcasing its best players and hype the All-Star Game nearly to death, but the real showcase takes place the night before the game during the skills competitions. Last year's competitions produced quite a few memorable moments. So in honor of dunkers, shooters and dribblers of past, present and future, SCO offers a guide to the most exciting part of the NBA weekend — All-Star Saturday night.

This contest won't be a proving ground for any of the participants. All are proven sharpshooters, and more than that, all are legitimate NBA stars. The hardest contest to predict features some big names and has the potential to be one of the best shootouts in recent memory. 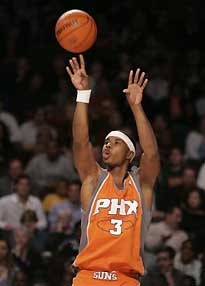 Seattle guard Ray Allen is no stranger to the three-point line; Allen leads the NBA in three-pointers attempted and three-pointers made, shooting 39.4 percent from downtown. Allen is also a veteran of the competition, winning the event in 2001 in Washington, D.C. Allen's silky jumper and smooth delivery make him the favorite in this event nearly every year.

Dallas Mavericks teammates Jason Terry and Dirk Nowitzki go into the three-point shootout going 42.5 and 41.7 percent, respectively, from beyond the arc. Though Nowitzki's unorthodox shot may not be conducive to the shootout, Dirk won't go out easy. As for Terry, he is a pure scorer with 30-foot range.

Chauncey Billups, the Detroit Pistons' sharp shooting point guard, will look to beat the rest of the field with his 43 percent shooting from downtown (eighth in the league), while wild-card Raja Bell of the Phoenix Suns comes in shooting 45.5 percent from three-point land.

Defending champion Quentin Richardson, now of the New York Knicks, will look to hold on to his title with his streaky shooting and 35 percent career mark from outside the arc. Richardson is the type of shooter who can get on a roll in a hurry, and when he does, look out.

The skills challenge tests the dribbling, shooting and passing skills of competitors as they race through an obstacle course that spans the length of the court. Steve Nash beat out the competition in 2005 with superior passing and clutch shooting.

The Cleveland Cavaliers' LeBron James is a quick and athletic combo guard who should be able to speed his way through the obstacle course with ease. But LeBron will be tested in the passing stations and will need to knock down clutch shots to win.

Like James, Miami Heat star Dwayne Wade is a strong guard with refined skills, but may struggle with the passing stations. Still, Wade will work through the course in no time, testing the competition.

Chris Paul of the New Orleans/Oklahoma City Hornets is a rookie with a crazy handle, exceptional passing skills and a solid jump shot. Paul will challenge Nash for the title in this competition, as he weaves his way across the court with the confidence he has gained through a strong first half.

Phoenix Suns leader Nash is the perfect model for this competition, and will look to defend his title in 2006 with a special performance. Nash has experience in the obstacle course and a knack for getting the ball through tight spots to complete passes.

With a fresh field full of high flyers and the defending champion, this year's dunk contest should definitely be the highlight of All-Star weekend.

New York Knicks 5'9" rookie Nate Robinson could wow fans if he comes up with some creative dunks. The lovable little guy has provided some highlight-film dunks this season for a team that otherwise hasn't had much to cheer about. The next Spud Webb will try to outhop the much taller Iguodala, Warrick and Smith. 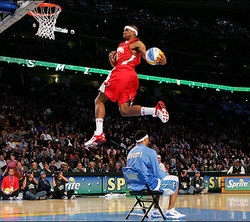 The 6'6 Iguodala has averaged 12 points per game this season for the 76'ers despite lacking a true jump shot. His six rebounds a game and 1.48 steals a game are due more to his otherworldly quickness and natural leaping ability than anything else. Who knows what this athletic powerhouse will come up with

Warrick is averaging just under 10 minutes a game for the Memphis Grizzlies, one of the youngest teams in the NBA. As the dark horse in this competition, Warrick will be looking to make a name for himself, much like Vince Carter, Josh Smith and others before him.

Speaking of Smith, he has to be the favorite to repeat as dunk champion. He wowed everyone last year with his aerial acrobatics and flight display. Even though he hasn't evolved into an all-around superstar in the league yet, Smith showed last year that he has the creativity and jumping ability to provide enough highlights for a whole episode of "SportsCenter."