A piece of Takoma Park

It is a Sunday afternoon in Old Town Takoma Park and the shops on Carroll Avenue are bustling with people. Bells ring as customers filter in and out of stores carrying bags, holding their children's hands and completing errands. Vendors at the Farmer's Market are packing up their remaining produce into trucks and vans. The clock at the center of Old Town reads 2:15 p.m. It is windy outside, but the sun is shining and the storefront windows decorated with merchandise, mannequins and glittery hangings invite passerbys to enter.

But Old Town Takoma Park did not always resemble a quaint small-town shopping center with a vibrant culture and thriving liberal community. Carroll Avenue, the main street of Takoma Park's business sector, has grown slowly from an undeveloped expanse of land to a small railroad town to, finally, the shopping district it is known for today. 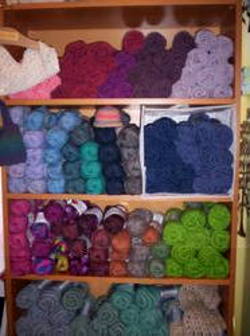 Photo: The recently opened knitting section at Now and Then sells yarn, needles and kits, just a few of the many fascinating products available at the store.

Photo: The recently opened knitting section at Now and Then sells yarn, needles and kits, just a few of the many fascinating products available at the store.

Since real estate promoter Benjamin Franklin Gilbert founded Takoma Park in 1883, the city has grown from less than 250 residents to a population of 20,000 citizens. Gilbert's dream to create a city soon became a reality when he started surveying land and buying more lots in the area. Marie Cory, a friend of Gilbert's, said that in 1913 Takoma Park was "a town of exceptional beauty, its homes set under forest trees filled with signing birds; its schools and churches…," according to "Takoma Park: Portrait of a Victorian Suburb," by Ellen R. Marsh and Mary Anne O'Boyle (Historic Takoma Inc., 1984).

Over the years, Takoma Park has grown its own unique culture, a perfect blend of political activism with a friendly community. This culture has been centered in Old Town Takoma Park since the area began its transition from service stores to small businesses. Now, the strip includes about a dozen shops, a variety of diverse restaurants and a weekly market promoting homegrown produce.

Whether Takoma Park residents are looking for Tibetan prayer flags, Persian carpets similar to those featured in "Aladdin" or yarn made from bamboo, the shops in Old Town have it all. While all of the shops share some qualities, namely the variety of products, each shop is distinctly one of a kind.

One of the oldest stores in Old Town is Now and Then, a lively, colorful shop that opened April 1, 1983, when only service stores and few of the existing shops were in business. Jude Garrett, the storeowner, started the business after feeling dissatisfied with her previous job. When she saw the space for rent, she decided to take advantage of the opportunity. "I decided to go for it, take a risk," Garrett says. In the 23 years of operation, Garrett has acquired a variety of different products, from baby supplies to craft projects. She recently opened a knitting section, which includes needles, books and yarn.

Around the corner is Sangha, Takoma Park's own fair trade store and performance space, bringing Takoma Park citizens together. Jennifer Carter, the store's owner, advocates fair trade, a system where people who make goods receive fair wages without environmental hazards. Carter opened the store at its current location on Sept. 11, 2001 by pulling investments from family and friends. She wanted to have "a community gathering space and a place where people could learn about a viable alternative to a sweat shop industry, which is fair trade," Carter explains.

The store's striking atmosphere catches shoppers off guard at first, but visitors soon relax, their eyes drawn to the products around them. Molas, an old folk art made in the San Blas Islands off of Panama, adorn the walls, the vibrant colors and shapes catching the eyes of shoppers. Spread out on a table against a wall, jewelry adorned with fossils exemplifies the store's pledge to sell only goods purchased from worker-owned cooperatives. Quietly tucked into a corner, is the Meditation Room, dedicated to Buddhism.

Magic Carpet is located on the Old Town commercial strip along with Now and Then and is one of the most diverse shops in Old Town. While the store appears dark and cluttered from the outside, the inside reveals a cozy, friendly atmosphere. Furniture is displayed realistically, mimicking the setting of a furnished room, nestled next to cases of jewelry and exotic scarves. Dozens of countries are represented by Magic Carpet's merchandise: Brazil, Turkey, China and Peru, to name a few. "[There are] different things from all over the world and I love that feeling...,[it is a] flavor of different countries... [they] bring the whole world into one place," says store manager Denise Kaiter.

A sense of togetherness

Takoma Park's nurturing atmosphere is one of acceptance. The businesses give back to the community, providing a friendly relationship between the residential and commercial sections of Takoma Park. "[Takoma Park citizens are] supportive of small business owners. We are grateful for that," says Kaiter.

Owners like Garrett donate to many groups in Takoma Park, such as the softball league and daycare centers, while Carter brings the community into her store by holding events. "There are so many things that go on here that don't pay money, but [are] so good for the community," says Carter, who hosts Pine Players performances and musical concerts. Carter also plans on starting a language institute that will teach children Spanish, French, Hebrew and Arabic, as well as the cultural history of each.

Since Now and Then is one of the oldest shops in Old Town, Garrett has been able to connect with the community in other ways besides donating to organizations by developing unique relationships with her customers. Many Takoma Park teenagers fondly recall last-minute gift shopping at Now and Then, while Garrett has enjoyed following their transition into adulthood. "It's been fun watching so many people grow up," says Garrett, "I love knowing my customers for all this time."