A pirate's life for them

If you were a child, chances are you wanted to be a pirate at some point. The salt air, colorful clothes and sense of righteous rebellion are extremely alluring. But if you, like most children, never got to see your dream come true, Blair Theatre's Treasure Island, directed as always by Kelly and John O'Connor, is a great substitute. The complex story, talented cast and spellbinding set make for an exciting and whimsical pirate adventure. 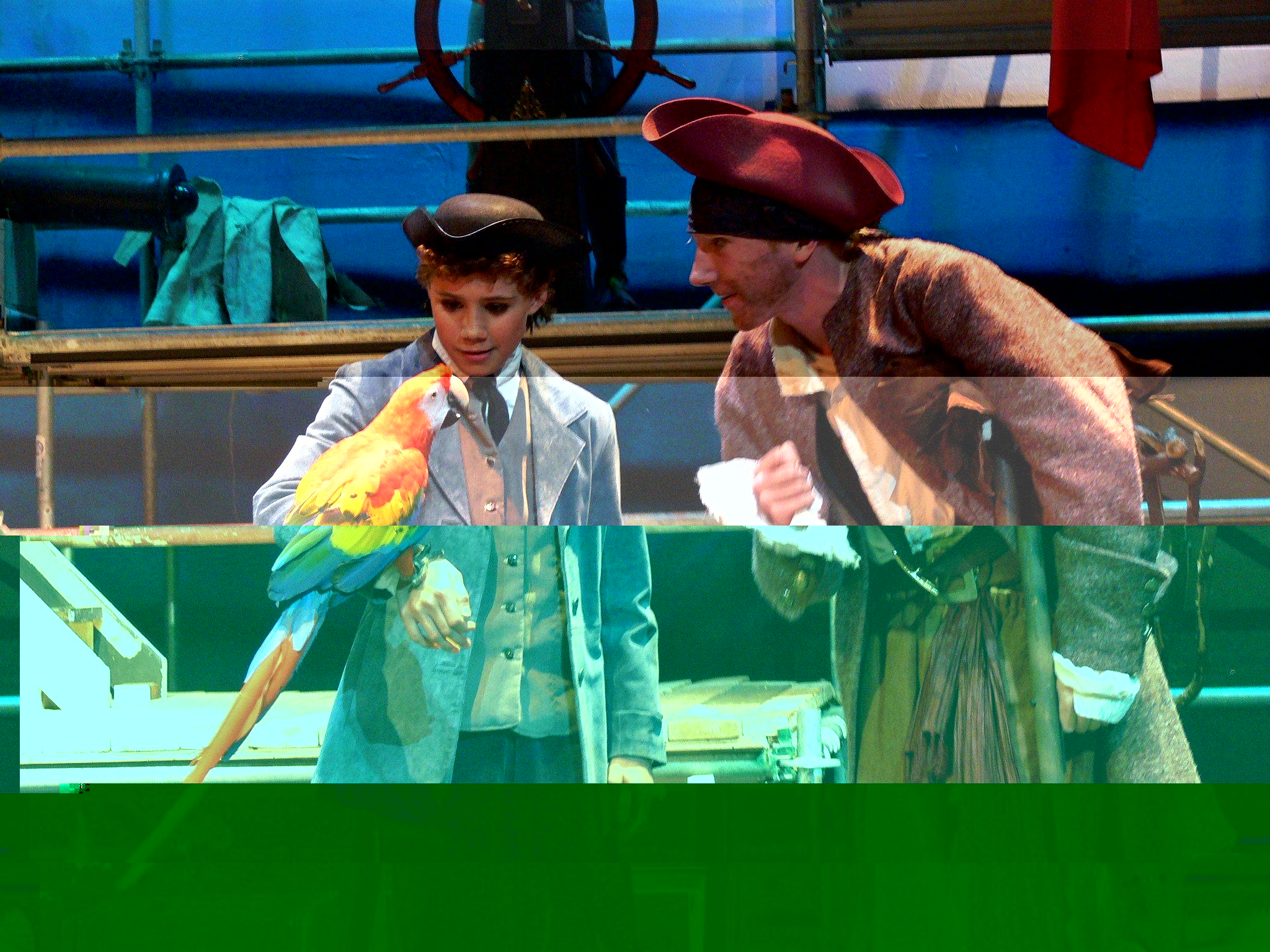 Treasure Island starts off with an old, gruff, very drunk seaman named Billy Bones (Abby Rowland/Lucy Glenshaw) who is hiding in a remote place just along the Cornish coast called the Admiral Benbow Inn. There, he meets Jim Hawkins (Milena Castillo/Eli Cohen) and his mother (Yuchabel Sanon/Rachel Arbacher). Billy befriends Jim, and soon Jim learns that there are vicious pirates looking for Billy: most notably, the seafaring man with one leg. When Billy dies, Jim and his mother search his trunk in order to find the appropriate money for the fee Billy racked up, grabbing coins and a small parcel when they hear pirates coming. They realize that the small parcel is a treasure map created by the infamous Captain Flint (Lela Gayle/Derek Lamb), a nefarious pirate. With the help of Squire Trelawney (Samantha Chyatte/Ben Miller), Jim, the perceptive Doctor Livesly (Niarah Jackson/Miriam Jiffar) and the respectable Captain Smollet (Luc Picone/Jack Russ) hire a crew and take to the sea so they can find the treasure themselves. But there are exciting fights, mutinies, a live parrot, interesting accents, menacing islands and, of course, pirates that stand in their way.

It's an ambitious play, filled with moral grey areas and questions about who to trust. The action is packed. The characters are complex. Perhaps the most complicated character is Long John Silver (Liam Mendizabal/Conor James), a classic pirate if there ever was one, whose ambiguous loyalties and cleverness are essential to the plot. Both Mendizabal and James bring a reality to this iconic, complicated character that makes him sympathetic and undeniably interesting. Ben Gunn (Ben Holland/Brian Swantkowski) is also a highlight, an insane marooned sailor who has been stuck on the island for years. His antics have a deadly intent, and the Gollum-like portrayal by Holland and Swantkowski make him easily one of the most fascinating characters in the play.

The set, designed by junior Dio Cramer, is perfect. A first glance, it seems like a spidery jungle gym of planks and poles, but it can become anything that the play needs: a ship, a loading dock, a jungle-y island or a room at an inn. The relative bareness of the set is filled with smaller props and brought to life in each scene in a new way. The actors swing across levels and hide in its angles, making it seem lively and fluid. It can fit any mood that it needs to and respond to every aspect of a diverse play.

Kelly O'Connor's costumes are exquisite—lovely 18th century dresses for the very few ladies, neat jackets and breeches for the men. The pirates have colorful clothes that look cobbled together, exactly right for their characters. They bring the time period and the distinct classes to each character, introducing their characters before they open their mouths. Additionally, the script, which was written by John O'Connor and based on the book "Treasure Island" by Robert Louis Stevenson, perfectly highlights the complexities and nuances of the play--entirely in historical language. 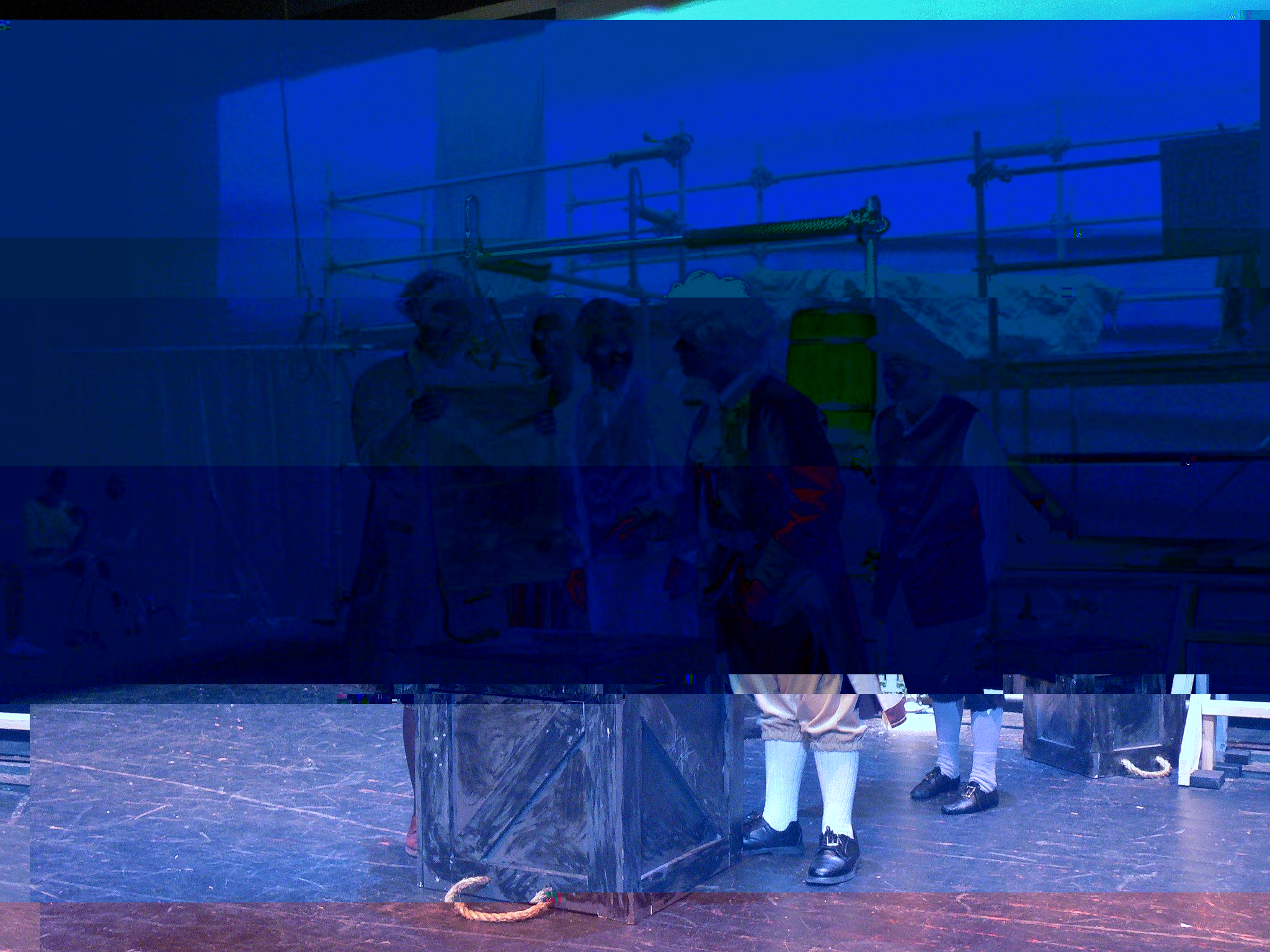 No pirate play would be complete without the appropriate pirate music, and Treasure Island doesn't disappoint. The classic "Dead Man's Chest" is used throughout the play, at the beginning and end as well as by individual characters to set the creepy pirate-y mood. Student band Useless Grant's song "Maritime Adventure" offers just the right amount of rough-edged sea-faring spirit to set off their three-month trip across the ocean.

Milena Castillo is the Editor in Chief of La Esquina Latina, the Spanish section of Silver Chips Print.