A play for "All Seasons"

Just as Laurence Olivier was born to be on the big screen and Ginger Rogers was born to dance, Blair senior Joe Lorenz was born to light up the stage. He did just that in the Pine Players' production of Robert Bolt's "A Man For All Seasons" with the help of other talented Blair students. Although the entire cast of the Pine Players' production was fabulous, Lorenz, who played the lead role, Sir Thomas More, carries the play from ordinary to extraordinary. 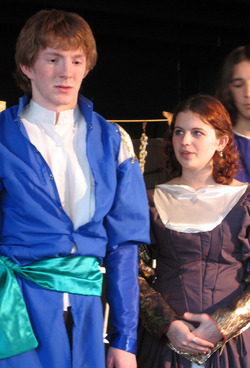 Photo: Senior Joe Lorenz and sophomore Sarah Rothman perform in the Pine Players production of "A Man for All Seasons." Photo courtesy of Ellie D'Eustachio.

Photo: Senior Joe Lorenz and sophomore Sarah Rothman perform in the Pine Players production of "A Man for All Seasons." Photo courtesy of Ellie D'Eustachio.

Under the direction of senior Lizzi Albert and junior Leandra Tidwell, Lorenz captures the morality and dry wit of his character with the grace of a professional actor. When More, an advisor to King Henry VIII, is asked to break his oath to the Pope and grant the king a divorce, More is torn between loyalty for his country and his own principles. As the despicable team of Thomas Cromwell (senior Katie Frank) and selfish Richard Rich (senior Bruno Falcon) search for ways to incriminate More and force him to grant the divorce, More gracefully dodges any direct involvement in the political struggle. But More cannot stay impartial forever and eventually must choose between his life and martyrdom. Helping sway his decision are his close friends, the Duke of Norfolk (junior Scott Wittmann), wife Alice (senior Sally Lanar) and daughter Margaret (sophomore Sarah Rothman). In this relatively somber play, The Common Man (junior Zachary Eaton,) provides excellent narration.

Although about half the cast is new to the group, including Lorenz, the Pine Players still work well together with minimal line blunders. They put on a professional production that would have pleased even the harshest of critics.

Lorenz may carry the play forward, but new members Falcon and Whittman hold their own against the more experienced actors. Lanar, another addition to the Pine Players, manages to develop the independent nature of her character and works well with Lorenz.

Frank, who has performed with the Pine Players before, pulls off Cromwell and presents a villain who is malevolent and scheming, but not cliché. Eaton, also a returning Player, is a great Common Man who does not steal the spotlight, but still gives a memorable performance filled with sarcastic humor and exaggerated facial expressions.

All of these actors, though good, wither in comparison to Lorenz. What stands out in Lorenz is not just his natural acting ability, but the work that he obviously put into preparing for his role. He does not just rely on his natural talent. This fusion of dedication and talent results in Lorenz becoming Sir Thomas More, not just him pretending to be More.

Although the Pine Players are not always Blazers, their plays are entirely produced, directed and performed by high school students. "A Man For All Season's" cast is comprised entirely of Blair students and boasts amazing costumes and artwork, made by juniors Ellie d'Eustachio and Sean Griffin. The Pine Players have put on four plays since their beginning in 2004 and have raised more than $3500 for Bread for the City, a charity that aids the homeless in Washington, D.C.

"A Man For All Seasons" regrettably played for only two nights, but each night brought a full house, and the Pine Players raised $1462. The Pine Players not only gives students a chance to form strong bonds with one another, but they also give back to the community through both entertainment and charity.