A plea for democracy

For two weeks now, the world has watched the ongoing chaos in Egypt. Pro-democracy protestors have erupted in the streets of Cairo, demanding that President Hosni Mubarak step down. The people of Egypt have been oppressed by Mubarak's regime for 29 years and have finally decided to take a stand. The success of these protests could drastically change the lives of Egyptians, what could the success or failure of these protests mean for the rest of the world? 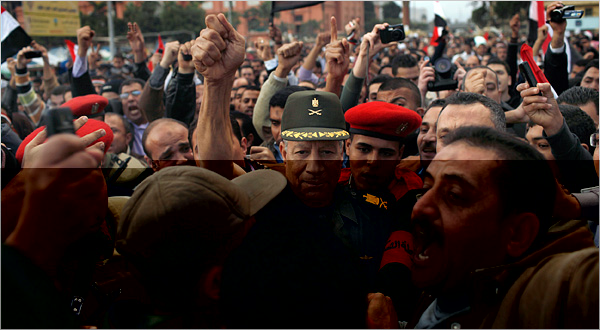 Photo: Citizen protests in Egypt are leading to a potential upheaval of the nation's government.

Photo: Citizen protests in Egypt are leading to a potential upheaval of the nation's government.

Before this question gets answered, a brief background on Egypt and Mubarak's regime is critical. After the assassination of President Anwar El Sadat in 1981, vice president Mubarak took the presidency and became the chairman of Egypt's National Democratic Party (NDP). Since 1967, Egypt has been in a "state of emergency,” which gives the President the power to control all aspects of citizens' political lives. When Mubarak renewed this emergency law in 1998 he asserted that the law would help keep the nation stable and protect Egypt from threats of terrorism.

Although Mubarak and the NDP claim that Egypt is under a democracy, the government's structure is far from democratic. In fact, the longer Mubarak has remained in office, the more corruption Egypt has faced. With emergency law in effect, censorship has been legal, several activists and political figures have been detained without trial and citizens have lost almost all constitutional rights.

But this corrupt attempt at governing has taken its toll on the people of Egypt. Organized protests have erupted all over Cairo in the past two weeks, demanding that the country's corrupt leader step down. But Mubarak has not shown any signs of letting up. Although the President finally restored internet to the nation and wants a peaceful transition, he announced that he has decided to serve out the rest of his term. With both sides unwilling to give in to the other's wishes, Egypt will remain in a gridlock.

Regardless of whether the protests are successful, taking a stand against the government is revolutionary for Egypt. For the first time in 29 years, the people's voices are finally at least being taken into consideration by their government. And the protests have been inspiring to other nations as well. Protests against their respective oppresive governments have risen in Jordan and Sudan, who are neighboring nations to Egypt.

The White House has been somewhat conflicted in how to react to these protests. During his presidency, Mubarak maintained a close relationship with the U.S., although the U.S. was critical of some his governmental policies that minimized citizens' rights. While taking the United States' history with Egypt, as protests erupted, President Obama stated that he supports the movement for democracy that the protestors have exhibited and a peaceful transition into a more democratic government.

The protests in Egypt have caused much commotion not just in Egypt, but in the rest of the world as well. Egyptian civilian protestors have made their voices heard by a larger audience than they may have ever imagined: the rest of the world. With such global discussion now taking place, one can only hope that these protests will inspire change in Egypt.