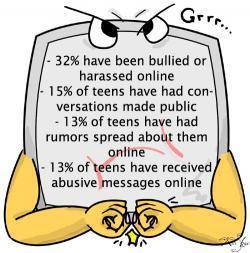 With the advent of instant messaging and online networking sites like Facebook and Myspace, harassment has expanded from taunting jeers in the hallways to hateful online comments. Schools are unlikely to rid themselves of bullying completely, but a new bill recently introduced in the Maryland General Assembly shows considerable promise in fixing the issue of bullying – online and in schools.

Delegate Craig L. Rice (D-Montgomery) first introduced the bill in the Maryland House of Delegates on Jan. 22 after he met with a Montgomery County high school student who was harassed by her peers – at school and on Myspace – when she declared herself as lesbian. The proposed bill extends the Safe Schools Reporting Act of 2005, which requires the Maryland State Department of Education (MSDE) to report incidents of harassment or intimidation against students in public schools to the legislature. The proposed legislation would require schools to define new standards for investigating bullying charges and discipline students accused of bullying, either at school or online.

This new bill would, at the very least, discourage and perhaps even repress the widespread bullying between students that has surfaced in recent years. According to a report from the MSDE to the Maryland General Assembly, more than 2,000 incidents of bullying occurred in public schools during the 2005-2006 school year, up from 1,000 the previous year – and these numbers count only bullying incidents in schools. A national 2007 study by the Pew Internet & American Life Project found that about one- third of teens reported being bullied or harassed online, from receiving threatening messages to having embarrassing pictures posted online. The increase in the amount of bullying at school and the alarming rates of bullying online result in a disgusting issue of intimidation and harassment that needs to be eliminated.

The stricter standards of investigation and punishment proposed in the bill are the first steps to decreasing the shocking figures. "The law can't stop bullying, but it can identify it," said Alex Gudger, Rice's legislative aide. While the proposed bill can obviously not stop specific incidents, it will require state and county boards to establish standards regarding investigation, punishment and aid.

However, these requirements will be rendered ineffective unless bullied students can come forward to get the justice they deserve. The bill needs to include one more section that requires schools to increase awareness of the spread of bullying – perhaps to make a concise version of the annual report of bullying statistics freely available to students, so that victims will realize that they are not alone and that they need to speak up.

In spite of its noble intentions and potential benefit to students, though, the bill is still far from being passed. According to Gudger, the legislation has run into trouble with its jurisdiction. "The legislature can only regulate schools, and there are legal problems as to where [bullying] happens – is it online, in the air, in the hallways?" he said. The legislators need to resolve these wording issues and pass this much-needed bill because the simple fact is that students are suffering from hate comments and nasty taunts online everyday.

Even Gudger admits that the bill is "a shot in the dark in some ways." But the legislators must fix the wording that needs fixing, and get the bill passed. With bullying so widespread, this legislation will be a much-needed strike against the torments that students suffer.