When social studies teacher Lansing Freeman came to school last Monday, he knew that people would be talking about him – students, fellow teachers, even people he didn't know. The day before, Freeman appeared in The Washington Post's "Date Lab" column. Date Lab, a weekly feature published in The Washington Post Magazine, sets up two metropolitan-area singles on a blind date and chronicles their reactions afterwards. 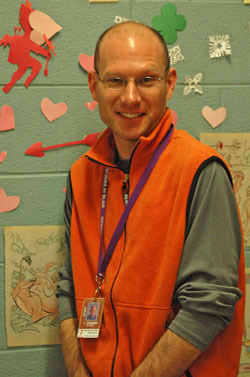 Freeman, however, isn't embarrassed about the student and staff reaction. "I think it's fantastic," he says. "Someone in the social studies department even cut out the article and posted it up, and we're all having a blast over it."

In fact, he received exactly the reaction he expected – lots and lots of laughs. From an administrator (Patricia Hurley) to a security guard (John Toombs) to a countless number of teachers and students, everyone has been teasing Freeman. Still, he says, he's taking it all in stride. "Everyone knows I'll do anything for a laugh, and that's exactly what happened here," he says.

It all started last Thanksgiving, when his sister urged him to apply for Date Lab. Once he submitted the application, The Washington Post contacted him in December to set up a date. In January, Freeman went on all-expense paid dinner date with Debbie Marchinkowski, a corporate relations manager.

The Post picked the posh Bombay Club in Washington D.C. and gave the couple $125 to spend, according to Freeman. After a friendly evening, the couple took pictures with two disposable digital cameras provided by the paper. The next day someone from the Post called Freeman to get his reaction and then periodically contacted him in the following two weeks to flesh out what happened.

"During that period of interrogation Debbie and I were emailing each other back and forth," Freeman says. "I mean, we both found it amusing." They set up another date at the Phillips Gallery in Dupont Circle. While he had a good time, Freeman says, "There just wasn't any special chemistry." He sent her an e-mail thanking her for the time, and the two haven't contacted since.

Although Freeman's date with Marchinkowski didn't end in a relationship, Freeman says, other women were certainly interested. The Post forwarded him an e-mail from a woman asking for his contact information after she saw Freeman in the Post and "thought Debbie missed out," says Freeman. And that's not all – he's been asked about his appearance by people in his neighborhood, patrons at a gym, and even a woman at the Turkish embassy. Freeman is definitely not deterred by the result of his Date Lab foray, though, and says, "Sure, I'd do it again."