A new railway would offer ease to county's congested commute

The Purple Line was a radical plan designed to decrease rail congestion and travel time while lowering the county's dependence on the Beltway and reducing environmental impact. Supported by politicians early in its development, the idea of a rail was cut down by an opposing force of homeowners and representing politicians who claimed that it was a short­sighted, expensive solution that would not solve the long term congestion problems. The Greater Bethesda-Chevy Chase Coalition, a group of homeowners dedicated to protecting the Capital Crescent Trail, a trail that runs parallel the proposed Purple Line route, has become a front for this union of anti-Purple Liners, asserting that the Purple Line will cause irreparable damage to the trail, decrease property values and increase neighborhood noise levels drastically. 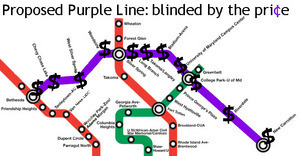 Photo:
Despite these cries of protest, the vast majority of the local area residents would see their lives, environment and economy greatly improved because of the Purple Line. This is precisely why adding another Metro line is a feasible project that must be completed.

Politically, the Purple Line issue seethed quietly for a decade until this year's gubernatorial and local elections, when candidates started taking serious positions on the issue. Chief governor contenders Baltimore Mayor Martin O'Malley (D) and incumbent Robert L. Ehrlich Jr. (R) are both vouching for the votes of the densely-packed citizens of the Bethesda-Silver Spring area who are seeking a way out of daily traffic. Ehrlich promises to allot $120 million to the Purple Line and other transportation issues in the county, falling far short of the $350 million to $1.2 billion constructional price estimates on the project, while O'Malley has not yet addressed the issue economically but still earnestly promises to support it.

According to the Washington Metropolitan Area Transit Authority (WMATA), 45 minutes is the average rush hour commute between Bethesda and Silver Spring metro stations using the current rail, while the actual distance is only about 5 miles. Operating at full capacity, the Purple Line could reliably cut that time in half, for studies by the Metropolitan Washington Air Quality Committee (MWAQA) have shown that the projected decrease in personal vehicles will yield cleaner air and environmental conditions in the area.

The Greater BCC Coalition's main reason for opposing the Purple Line, the protection of the Crescent Trail's nature and the tranquility of the immediate area, leaks like a sieve in light of the fact that the proposed Purple Line calls for a 30 foot buffer between it and the trail. The buffer, constructed of hardy plants, is designed to shield the trail and surrounding neighborhoods from the sounds and pollution from railways. Currently, over 60 railway systems in the United States exist in this fashion, allowing a railway to run close to a trail without damaging its plant and animal life. In order to keep the residential areas that the rail has to run through at peace, a proposed plan can make those tracks underground, out of sight and earshot. As for the alleged decrease in property values, according to a paper published by the American Public Transportation Organization (APTA), per foot values for homes increase 5 to 10 percent when close to a light rail.

A result of the constant block on the Purple Line's progress has been the promotion, development and approval of the Intercounty Connector (ICC). Joining I-95 and I-270, the ICC is valued at over $2.4 billion with environmental assessments, according to MWAQA, vastly more negative than those of the Purple Line. The Purple Line will be an environmentally cleaner and faster way of traveling with its fuel efficient railway and frequent travel times, while the ICC offers more roads for more commuters to get their exponentially increasing number of cars jammed in. Compared to the ICC, a rail also offers greater options for expansion later in the future development through the single raised railways of Metro lines, not with the 6 lane streets of behemoth highways.

With a cleaner alternative to more highways, faster travel time than a road commute and increased property values, the Purple Line is the solution to the Montgomery County transportation problem. The local politicians, vying for our votes, must push for the construction of this railway.

To view a picture of the proposed Purple Line, click here.